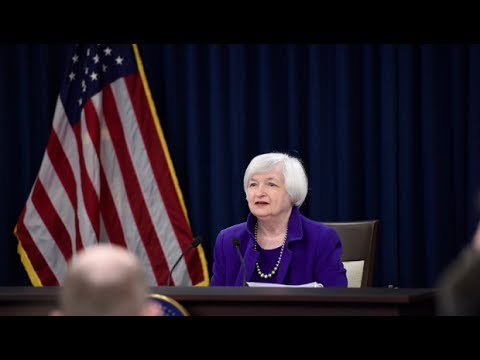 GREGORY WILPERT: It’s The Real News Network. I’m Gregory Wilpert coming to you from Quito, Ecuador. The U.S. Federal Reserve raised interest rates last week for the second time in three months to 1.25%. Here’s what Federal Reserve Chair Janet Yellen had to say when she made the announcement.

JANET YELLEN: Today the Federal Open Market Committee decided to raise the target range for the federal funds rate by one quarter percentage point bringing it to one to one quarter percent. Our decision to make another gradual reduction in the amount of policy accommodation reflects the progress the economy has made and is expected to make toward maximum employment and price stability objectives is signed to us by law.

GREGORY WILPERT: In other words, the Federal Reserve decided to raise its benchmark interest rate because the unemployment rate is nearing what some economists call “full employment,” and that this could cause inflation to rise. Joining us to analyze the recent interest rate is Dean Baker. Dean is the co-director of the Center for Economic and Policy Research and is the author of “Rigged: How Globalization and the Rules of the Modern Economy Were Structured to Make the Rich Richer.” Thanks for joining us again, Dean.

GREGORY WILPERT: First off, what are your thoughts on the Fed’s interest rate rise? Does the low unemployment rate that I mentioned justify raising the rate?

DEAN BAKER: It’s a really good question. We don’t know how low the unemployment rate can go, so if you ask most economists a couple years back, “How low can the unemployment rate go before inflation starts to pick up?” Most would have given you a number somewhere over five percent. In fact, the economist at the Fed put it at about five three, five four as of, I think that was 2013. We’re well below that now and inflation is not picking up. Many of the people, including those at the Fed, and I’m sure Janet Yellen thinks something like that, that if four three, the current level of unemployment, we’re at that low point and possibly even below it, hence their concern about inflation.

The two points I would made is one, we don’t see any evidence that inflation is picking up. In fact, in the most recent data, it’s been slowing slightly. That doesn’t seem consistent with that story. The other one is that they had been wrong. The estimates had been too high in the past. Four three could be right, but it’s entirely possible the unemployment rate can go still lower. We got down to four percent back in 2000, there’s little evidence of rising prices then. We could look back further to the 60s where it’s as low as three percent. I would like to see us try and do better. I don’t know how low it can go, but I think we could do better.

DEAN BAKER: The point of raising interest rates is to slow the economy. The rate that the Federal Reserve Board immediately controls, the federal funds rate, this is an overlooked night raid on money that banks lend to each other and it doesn’t directly affect us, but it does upward pressure on the interest rates that people pay when they buy a car, when they pay their credit card, the interest on their credit card, when they get a mortgage. That discourages borrowing, discourages people from buying cars, buying houses, so that has the effect of slowing the economy. As a practical matter, we haven’t seen big increases in those longer term rates thus far, but this is something I don’t think we can count on going forward. If the Fed continues on a path of raising interest rates, I think we will see more of an increase in interest on car loans, mortgages, and that will have a substantial impact in slowing the economy.

GREGORY WILPERT: Since the inflation rate, which you had mentioned already, is pretty low, and actually the latest triggers I think we were something like 1.5% at an annual rate. If they’re so low, that doesn’t justify raising the interest rate, then why do you think that the Fed decided to raise the interest rates anyway?

DEAN BAKER: I think they’re overly concerned about inflation. There’s a, to my view, obsession that we cannot have an inflation rate that gets out of line and … Their official target is two percent, so what that means is it’s an average, it’s not a ceiling. We’ve been below two percent for a long time, we’ll have another recession at some point, and when that happens that will lower the rate of inflation. If we just follow their target, and many of us have argued their target is too low, but if we just follow their target, we should want to see the inflation rate get up two three, two four, two five, just so that we have two percent as an average, which again, is just what they themselves is the right rate. I think there’s so much concern by many members of the Fed … And I think part of this is that they’re close to the financial industry, who generally doesn’t like inflation. They’re so concerned about inflation being too high that they’re prepared to raise interest rates to slow the economy, quite possibly without need. This means millions of people don’t get jobs.

GREGORY WILPERT: Writers had and interesting had article the other day, which expressed doubt that inflation is a problem, just like you are saying as well. It also suggests that there’s perhaps a problem with the theory that low unemployment automatically leads to higher inflation. The article says, “The U.S. unemployment rate fell to a 16-year low, a 4.3% in May, but the Fed’s preferred measure for underlying inflation has been running below target for more than five years. And in April slowed a second months to 1.5%. That has led some to begin to question the validity of the traditional negative I am narrative of a tight labor market eventually sparking higher inflation.” What are your thoughts on this? What has happened, in other words, to the connection between low unemployment and inflation, which is kind of a given for many standard economic theories.

DEAN BAKER: I think part of the issue is we don’t know how low you have to get to get low unemployment. The classic story people always tell when they start talking about low unemployment leading to inflation is the story from the 60s and 70s. And that’s over 40 years ago. To generalize from that experience to the economy today, I think is a very big leap, which isn’t to say it’s necessarily wrong, it’s just that we shouldn’t assume that there’s a same sort of link between low unemployment and inflation that we had 40, 50 years ago. My view is let’s test it. Let’s the unemployment rate fall. No one has any story that inflation just jumps up, so if we let the unemployment rate fall below levels that are consistent with stable inflation, what we should expect to see is modest increases in the rate of inflation, which we could then stop by raising interest rates and pushing unemployment back up. In the context where we don’t know exactly what the limits are, seems to me it’s worth pressing them.

GREGORY WILPERT: I’m wondering if it could also have something to do with something that Doug Henwood, from the Left Business Observer, mentioned a couple weeks ago, which is that the actual employment-to-population ratio is extremely low, actually. It’s much lower now than it has been any time since the early 70s, I think. Normally it’s around … That is, at its high point, the total employment population to the total population was something like 64%, and now it’s around 60%. That would mean that something like 7.7 million people would have to be employed in order to reach the level that we were at in 2000. I’m wondering if that could have something to do with that. In other words, that the unemployment rate isn’t such a good measure for the inflationary pressures that is … There’s still plenty of people out there who, if they have the opportunity, who are not currently counted in the unemployment figures, if they had the opportunity to find work, they would go find work and therefore, that’s not creating an upward pressure on wages and therefore it’s not creating inflation. What do you think of that theory?

DEAN BAKER: That’s one of the big issues, debates that we have in terms of the unemployment rate that may not be a good measure if there’s a lot of people who would like to work but aren’t in the labor force because they’ve dropped out because they’re weak job prospects. I think there’s a lot to that. I think you have to be careful here because one of the main reasons that the employment rate is down is simply because the baby boom cohort are now largely in their 60s, some in their 70s. They’re retired. We don’t expect them to be working. That’s not because we have a weak labor market, they’ve opted not work and in some cases they’re not able to work. But in any case, that’s not a weak demand story. What I tend to focus on is if you just look at the prime age workforce, people are between 25 and 54. Very few of those have retired. The employment rate among that group is still down by around three percentage points from where it was back in 2000, the last time we had a really strong labor market.

That suggests to me there is a lot of people that would be interested in working if there was demand for their employment. I think we still have a way to go. Again, that overall employment number might … Employment to population ratio number, might overstate it. But when you look at people 25 to 54, these are not people who are retired. I think we have some ways to go there.

GREGORY WILPERT: Okay. Thanks so much, Dean, for joining us to talk about this important issue today.

DEAN BAKER: Thanks a lot for having me in.

GREGORY WILPERT: Thank you for watching The Real News Network.