The political crisis in Puerto Rico is deepening, with a massive strike and hundreds of thousands taking to the streets, demanding Governor Rosselló resign for his corrupt management of the island. Activist Julio Lopez Varona analyzes the situation

The political crisis in Puerto Rico is deepening, with a massive strike and hundreds of thousands taking to the streets, demanding Governor Rosselló resign for his corrupt management of the island. Activist Julio Lopez Varona analyzes the situation 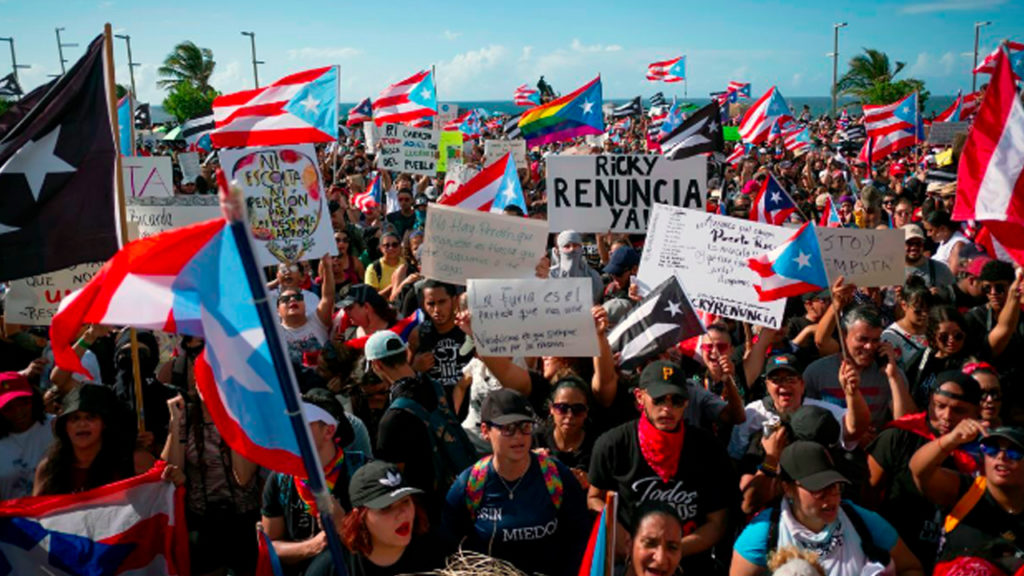 A general strike and massive protests are shaking the political establishment of Puerto Rico on Monday. Protests on the island have actually been taking place quite often since July 13th when Puerto Rico’s Center for Investigative Journalism published a trove of text messages from the inner circle of Governor Ricardo Rossello. In these messages, Rossello and members of his cabinet discussed fellow politicians, members of the media, and celebrities in profanity-laced, homophobic, and misogynistic terms. Then on Friday, the Center for Investigative Journalism also released an extensive report detailing a multimillion-dollar corruption network involving Governor Rossello and his inner circle. The protests, which blocked a major highway on Monday, have been met with increasing police repression, involving tear gas and the firing of rubber bullets. Here’s what some of the protesters had to say about why they have taken to the streets.

LAURA REXACH, PUERTO RICAN PROTESTER This is the first time I’ve seen more than five men in a protest. It’s usually all women. We’ve had federal arrests for corruption here before with his father’s administration, but it’s the corruption in the midst of so much suffering and so much vulnerability at an island-wide level. Everyone was suffering.

PUERTO RICAN PROTESTER After this little hurricane, I was hungry. I didn’t have water. Like, I didn’t have anything. And then this guy was living it up? Na bruh, you’re not fit to be governor. Out!

PUERTO RICAN PROTESTER It’s not even personal anymore. It’s more about that rage that we have inside that we have, like, really dumb people running this place, and we just want them out.

PUERTO RICAN PROTESTER We’re not asking to compromise with you, sir. We want you out.

GREG WILPERT Rossello tried to respond to the protests on Sunday by saying that he would not run for re-election next year, but he also denied any wrongdoing. Joining me now to discuss the recent events in Puerto Rico is Julio Lopez Varona. He’s a Co-Director of campaigns at the Center for Popular Democracy, which organizes the Puerto Rican community in the US to advocate for a just recovery for the island. He joins us today from San Juan, Puerto Rico. Thanks, Julio, for being here today.

JULIO LOPEZ VARONA Thank you for having me.

GREG WILPERT So let’s start with the protests and the strike that’s been happening today on Monday. What’s the turnout been like, and how has the reaction from the authorities been to the protests so far?

JULIO LOPEZ VARONA There’s been mainly a peaceful protest that started at 9 a.m. or 8 a.m., give or take. We don’t know yet how many people were there, but it was a sea of people, and we would say more than half a million. One of the reasons why this process is moving forward is because they wanted to show the force of the people in this moment. There’s like this, you know, this key number, which is more than 600,000 people because that’s the amount of people that voted for Rossello. So it’s just another show of force in a moment where people are not backing down. And, you know, it’s going to be today, it’s going to be tomorrow, it’s going to be next week— until he resigns.

GREG WILPERT Now, as you mentioned, the main demand has been for the governor to resign. What is it that upsets people the most about him? I mean, many media reports are portraying the protest as being mostly about the vulgar, sexist and homophobic text messages. Is that the main issue, or is there more to it as in this other report that we saw? There were also mentions of corruption. What do you see as being the main reasons for why people are upset with Rossello?

JULIO LOPEZ VARONA Well, the chat was a culmination of I think years of questions around government mismanagement of funds around Hurricane Maria. That same week that the chat came out, we also learned that there were charges of corruption when it came to the people that actually closed more than 200 schools, so there was already this air of discontent. I think what broke the camel was the fact that these text messages were not only misogynist, you know, and we’re not only homophobic, and provided all this bad context about how they were speaking about people. They were also making fun of people in a moment when people are still suffering in Puerto Rico from the hurricane. So I think it just struck a chord in people when we saw the person that is supposed to be representing us, making fun of us and actually, like, bluntly saying that he was taking advantage of the people of Puerto Rico. And I think it just got into a point where people couldn’t handle it enough, and it wasn’t—Like, it didn’t feel fair. It didn’t feel like this is the person that should be representing us.

GREG WILPERT Now, Rossello so far has resisted resigning and is saying that he might have been vulgar, but he didn’t do anything illegal. However, Friday’s report from the Center for Investigative Journalism outlines a big network of corruption really that would undermine that claim it seems. And two of his cabinet members or officials have already been arrested. Now, how much attention has this new report gotten? And could it play into Trump’s hand when Trump says, President Trump says, that Puerto Rico should not receive more aid— you know, for the damage that the hurricanes have caused and the economic crisis— because more aid would only go towards the corruption in Puerto Rico? What do you think about all of that?

JULIO LOPEZ VARONA I think unfortunately Trump has been saying something that, you know, in many ways is true. We have a government that is riddled with corruption charges right now. That being said, Puerto Rico needs some money for the recovery. And one of the things we’re saying is that we need to find ways in which communities can help move this money to the ground. Beyond the fact that the money’s coming to Puerto Rico, there are concerns about the fact that there is a process of displacement in our communities, while we know that there are hotel projects and tourism and other things where this money is coming. So to Trump’s credit, you know, even if they are inflammatory, his allegations are true. But that doesn’t mean that we don’t need the money. We just need a process to make sure that communities are at the forefront on how that money is assessed.

The other thing I would say is that you can talk about government corruption as much as you can, but, you know, the government that controls the Puerto Rican economy and has for the last hundred years has been the US. You know, the US has been the one that has moved forward the policies that actually created the debt crisis in Puerto Rico. And they have put in control the fiscal control board, which has pushed austerity and has pushed a lot of these measures that are now hurting our people. So saying that the government is corrupt, is just trying to undermine all of the processes that have led Puerto Rico to where it is.

GREG WILPERT Yeah. I think that’s a very good point. It is one that we’ve reported on a number of times— on the fiscal control board that is basically controlling the finances and budget of Puerto Rico. Now, if the protests succeed and force the governor’s resignation or impeachment, what happens next? Would there be an early gubernatorial election? And if so, who has the best chance of being elected at the moment?

JULIO LOPEZ VARONA So I’ll say, I was speaking to someone the other day and he said something very funny and beautiful: We don’t have leaders right now. Many of these actions have been organic. If you go to any of the actions, what you’ll find is young people that are mad and want to do something. So it is like this weird moment of anarchism  where we don’t have a national leader, which is concerning a little bit. But it’s also interesting and an opportunity.

So I would answer, we don’t know. There are real concerns about who would be the next person in line; for example, if it’s the Secretary of Justice. The Secretary of Justice’s consultant is the wife of Elias Sanchez, so we are not going very far if that’s the person that ends up being governor. [laughs] So I think what we are trying to do right now is raise the demand of whoever is the governor, we are going to continue fighting and we have some very, very clear demands when it comes to protecting services, auditing the debt, making sure that our pension holders are protected, and— right now because of the destabilization of the system— paralyzing any bankruptcy process until Puerto Rico has a governor and has a representative on the board.

GREG WILPERT Okay. Well, we’re going to leave it there for now. I was speaking to Julio Lopez Varona of the Center for Popular Democracy. Thanks again, Julio, for having joined us today.

JULIO LOPEZ VARONA Thank you for having me.

Julio is the Co-Director of Community Dignity campaigns. In this role, he helps support partners in the United States build campaigns that organize the growing Puerto Rican community to advocate for a just recovery for the island and create policies that support the community in the US, while holding corporate players accountable for the actions…

Would Austerity-Stricken Puerto Rico be Better off as an Independent State?