Despite signing a historic peace deal that should have ended a 50-year insurgency, Colombia is still very much a country at war.

Despite signing a historic peace deal that should have ended a 50-year insurgency, Colombia is still very much a country at war. 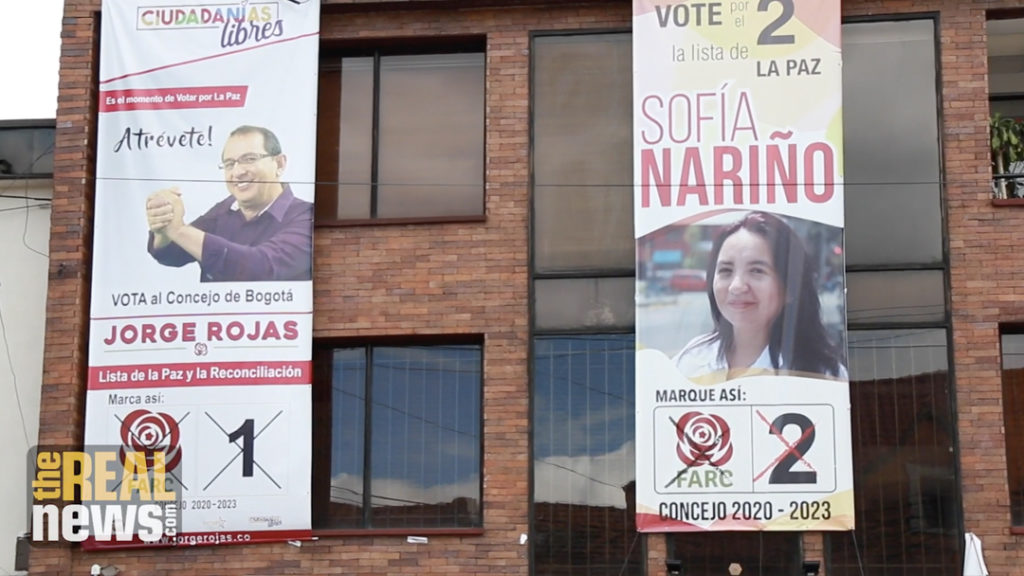 OSCAR LEON: Walking along the streets of Bogota, the signs of campaigning for Columbia’s local elections appear to show the signs of a vibrant democracy, but this couldn’t be farther from the truth. Despite the signing of a historic peace deal that should have ended a 50-year insurgency in the South American nation, this is still very much a country at war, yet the FARC, who are now a legal political party called the Revolutionary Alternative Force for the Commons, is participating in these elections. In spite of the risks and challenges they face, they must continue to fight for peace and social justice says FARC senator, Victoria Sandino.

VICTORIA SANDINO: Our fight for the structural changes in Colombian society are still valid, and one of those struggles is involvement in the electoral process. We have registered some 330 candidates with almost 40% of women to the city council lists, mayor’s offices, departmental assemblies, and local administration boards.

OSCAR LEON: Since the signing of the peace deal between the government and FARC in 2016, violence against social leaders and political activists has been nothing short of staggering. The country’s human rights ombudsman says that almost 500 people have been slain, while the attorney General’s office says the figure is around 300. Other human rights groups say that some 750 have been killed including at least 120 former rebels. This is mostly attributed to right-wing paramilitary groups who have also routinely harassed and threatened human rights activists and leftist political leaders. The FARC political party is specifically targeted by these groups while also being demonized by the media and right-wing politicians.

VICTORIA SANDINO: We have had a lot of difficulties, the first of which are the security conditions. Our people were threatened as soon as they were registered. They immediately began to receive threats. This is what we have heard from our comrades. This includes stigmatization, verbal attacks, attacks on social media, in the media.

OSCAR LEON: Although Colombia’s elections have been historically violent affairs, this campaign has shaped up to be one of the worst in recent memory. Despite deploying over 8,000 bodyguards to protect the 2,050 candidates for mayors, governors, and city councilors, the electoral observer mission or MOE says that there have been 108 violent incidents against candidates up from 74 in 2015. At least 171 people have been victims of intimidation or violence for their participation in political campaigns including 22 people killed. The Peace and Reconciliation Foundation says some 10 pre candidates and eight candidates are among those dead. This environment has made its way to the FARC’s doorsteps.

VICTORIA SANDINO: Here in Bogota, there was an assassination attempt made on one of our comrades running for a local administration board where one of her bodyguards was injured, for example. Here no less, last weekend, these offices were attacked. They ripped down the banners of our comrades who are candidates here. They spray painted and left pamphlets with threats.

OSCAR LEON: The country’s elections have also been marred by worries and reports of fraud and vote buying. According to the MOE, 152 municipalities are at risk of violence and electoral fraud, though this is down from 204 in the 2015 elections, where officials and over 1 million voter registrations tied to fraud. 12 mayoral candidates and 35 council candidates were also arrested. Some 19 candidates have been arrested for vote buying thus far. Senator Sandino says that many people sell their votes because they’re in need.

VICTORIA SANDINO: People can identify with a political proposal that addresses their issues or an electoral campaign, but at the time of voting, people sell their vote. This is because there is an absolute clientelism and corruption around the financing of the campaigns, around the election campaigners themselves. Then there are rivers of money around in the territory’s paying for people’s vote. People know this, so they have needs. They sell their vote for a certain amount of money or for building materials for their homes or for a two, three-month job.

OSCAR LEON: Despite these obstacles, the FARC were able to win some posts in a number of rural areas. In Bogota, the FARC were part of a coalition of groups supporting journalists and Humane Columbia candidate, Hollman Morris, who finished behind center-left candidate Claudia Lopez. These elections came in the wake of the announcement by some FARC leaders that they had returned to armed struggle. Victoria Sandino acknowledges that the government has failed to abide by the terms of the peace deal and that Colombians face mounting social issues but maintains that the fight to implement the accords should remain the priority.