Carles Puigdemont, the former president of Catalonia, was arrested in Germany on a Spanish international arrest warrant. The action will serve to harden positions on both sides of the independence fight in Spain, says Oberlin Prof. Sebastian Faber

Carles Puigdemont, the former president of Catalonia, was arrested in Germany on a Spanish international arrest warrant. The action will serve to harden positions on both sides of the independence fight in Spain, says Oberlin Prof. Sebastian Faber 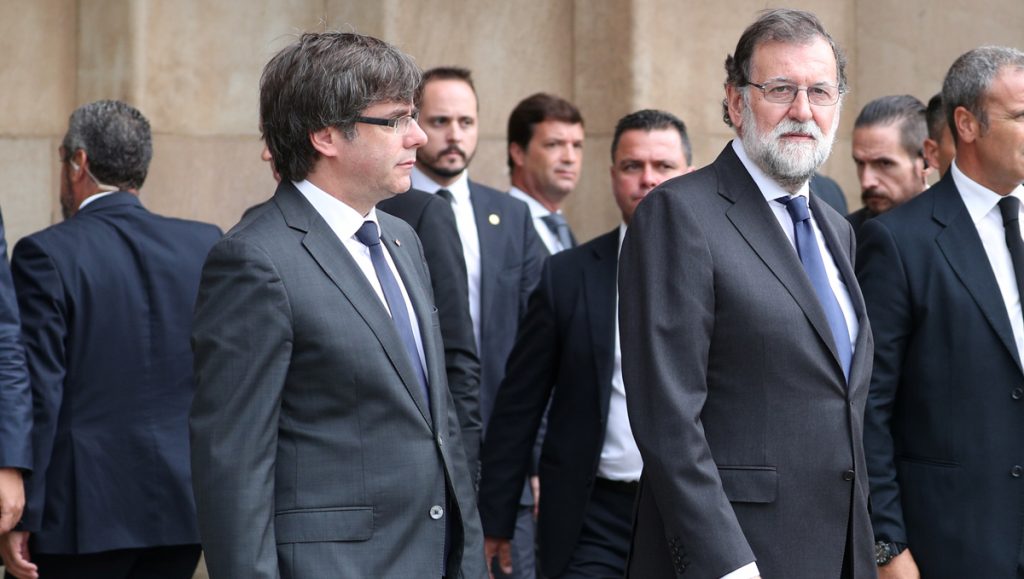 Catalonia’s independence leader and former President Carlos Puigdemont was arrested in Germany on Sunday. He was on his way back to Belgium from a conference in Finland when Spanish authorities alerted the German government about Puigdemont’s border crossing. Puigdemont has had a warrant out for his arrest ever since he organized a referendum in Catalan for its independence last October while he was president of Catalonia. Puigdemont’s supporters organized a spontaneous demonstration for his release in Barcelona. Meanwhile, in Madrid last Friday, a Spanish Supreme Court judge ordered that five Catalan independence politicians be held without bail who now face up to 30 years in jail on charges of rebellion.

Joining me now to analyze the ongoing complicated situation in Catalonia is Sebastiaan Faber. Sebastiaan is professor of Hispanic Studies at Oberlin College and author of the book “Memory Battles of the Spanish Civil War.” Welcome back to the Real News, Sebastiaan.

SEBASTIAAN FABER: Great to be back.

SHARMINI PERIES: Sebastiaan, ever since Spain’s prime minister Mariano Rajoy called for a snap election in Catalonia last December there has been no regional government there, because the three independence parties, which maintain a narrow majority, could not agree on a leader. What effect does the Puigdemont’s arrest in Germany have on political governance crises in Catalonia?

SEBASTIAAN FABER: There’s been really two effects. On the one hand there’s been a wave a new wave of indignation and protest. And in a way the reaction to his arrest has helped bring the three parties back together after a period in which they’ve been drifting apart, disagreeing over what kind of government should be put in place and what the nature and the aspirations of the government should be. Among the three, the smallest is the CUP, the Candidacy for Popular Unity, and the CUP of the three has been the one that kept pressing for an independent republic, whereas the other two have been trying to steer a more moderate route for now, hoping to regain Catalonia’s autonomous government back which has been revoked since late last year after the central government in Madrid imposed Article 155 of the Spanish Constitution.

So the arrest of Puigdemont on Sunday has helped bring these three parties back together and has steeled their resolve as they try to put a government back in place to at least make Catalonia autonomous again, and perhaps make further steps, even though it’s not clear that that is actually possible, given the strong and strict legal restrictions put in place at this point in Spain.

SHARMINI PERIES: Right. Now some analysts say that Prime Minister Rajoy is clearly avoiding a political settlement to the conflict in Catalonia by pursuing legal and judicial measures against the independence movement. Now, would you agree with that assessment? Or could these legal measures represent hopefully a bargaining chip in future negotiations with the independence movement?

SEBASTIAAN FABER: No, I completely agree with that Rajoy and his party, the Partido Popular in Spain, have avoided to the extent possible any kind of actual political negotiation over this conflict. It’s really a territorial conflict, it’s a territorial crisis where what’s at stake is Catalonia’s place within the Spanish state and the kind of competencies it has as an autonomous community in that state.

Even among the parties that say they’ve won a fight for independence it’s not clear whether they all actually want independence. The fight for independence has been put in place as a bargaining chip with the government, but the judicialization of the conflict via Madrid has not been a bargaining chip in part because by handing the issue over to the courts to the judicial branch, in effect the executive branch has let go of all control.

Currently there are four countries, four regions that have Catalan politicians in them, Scotland, Belgium, Switzerland, and Germany. And it will be the courts in all those four places will have to decide whether to give heed to the European arrest warrants issued by the Spanish Supreme Court, and under what conditions. So among the things that these courts will have to decide is whether they’ll send these politicians to Spain to be tried. But also on the basis of what charges.

And that’s really at this point what’s the interesting thing. That’s not clear to what extent, for example, the German courts will be delivering Puigdemont back to Spain facing charges of rebellion, or merely charges of misappropriation of funds. Those are the two main charges that he’s facing and if the German court decide to only extradite him back to Spain on the basis of misappropriation of funds that means that he will not be able to be judged or tried in Spain under the heavier charge of rebellion.

SHARMINI PERIES: Now, getting back to Catalan, since the election last December the independence parties have not been able to form a regional government. Why is that happening? What are the internal conflicts that they’re dealing with?

Internally the disagreement is really over the direction that this government should take, whether it should continue on the route to push for an independent republic, which is, the smallest of the three independence party wants to do that, the CUP. And the other two are at this point willing to moderate their aspirations and to strive merely for restitution of Catalan’s autonomous governments. So the revocation of Article 155 of the Spanish Constitution.

This disagreement over these different directions is so strong that the CUP has already in some locations withdrawn its support for this hypothetical new Catalan government.

SHARMINI PERIES: Now, all of this that’s going on , what effect is it having on the central government of Spain? Rajoy is head of a minority government. Is this sort of hard line posture he’s demonstrating against the Catalan independence movement strengthening or weakening his position in Spain as a whole?

SEBASTIAAN FABER: Initially I would say it had strengthened it. Generally speaking, in the big picture on both sides of the conflict, both on the Catalan side and the Spanish side, there’s been a weird mix of ideology and opportunism. Ideologically there are right-wing parties involved in both sides. And both those right-wing parties are taking half and have been champing either the case for, the cause for independence, or the cause against independence, and have been championing that cause as a way to shore up their electoral base.

So for Rajoy in Madrid the hard line, the, the no tolerance or zero tolerance approach to the Catalan aspirations have served, in principle, to shore up a base that was getting kind of sick and tired and distrustful of the them due to the many corruption scandals that have been plaguing the party. More recently, though, that support, what you could call the conservative Spanish base, has been abandoning the Partido Popular regardless, and shifting toward the younger party on the right, Ciudadanos, Citizens, which was a party founded in Catalonia and which went national only a couple of years ago, which has taken an even harder zero tolerance line toward Catalonia, which is where they’re from, and has managed, at least in the polls, to siphon away votes from the Partido Popular which, like I said, has been plagued with corruption to their own party.

So what you see now in Spain is a new rivalry within the centralist right between Partido Popular and Ciudadanos, in which they are now vying for the centralist conservative vote.

SHARMINI PERIES: Now, very strange in all of this is the Podemos party’s lack of involvement in this debate and discussion. Now, why is that taking place? Why is Podemos, although they have the city of Barcelona and we have a Podemos mayor in Barcelona, and yet they seem to be clearly staying out of the debate. Why?

SEBASTIAAN FABER: For Podemos and generally for parties on the left this is a very difficult question, in part because it has shifted the axis of the political debate. Podemos’s strength is a more traditional left-right axis where it can decry and denounce the corruption of the right-wing political parties. It can diagnose the, the tiredness of the old two political parties of the two party system, and it can put the finger on all kinds of social problems in Spain that have to do with cutbacks, the state of public health, the state of public education, the state of politics altogether. So in this traditional left-right division, Podemos is really strong because it has as a strong progressive agenda. What the conflict in Catalonia has done, it has shifted the axis to either centralist Spaniard or you’re a Catalan aspiring toward independence.

And like I said, both sides mix left and right. Both sides, this axis cuts across transversely the left-right debate, which means for a party like Podemos that every time they pay lip service in some way to the Catalan independence movement or merely to the right of self-determination of the Catalans, they lose support in the rest of Spain even among the left. Every time they pay lip service to centralist ideologies or to the notion that, well, Spain is better off if Catalonia stays within it, you’re liable to lose support in Catalonia among the pro-independence left. So it’s a very hard landscape to navigate, and you could really say that the right-wing parties both in Madrid and in Barcelona have taken, have received a lot of advantage from the shifting of the axis that has directly damaged the electoral prospects of the left, especially of a party like Podemos.

SHARMINI PERIES: Interesting predicament. Sebastiaan, I thank you so much for joining us today.

SHARMINI PERIES: You’ve really explained quite a few things in the short time, so I thank so much, and we’ll look forward to having you back.