After spending 19 months in jail on a 12-year prison sentence, Brazil's Supreme Court ruled that Lula had to be freed until his appeals are exhausted. Supporters greeted him enthusiastically and Lula promised to fight the unjust case against him and for social justice in Brazil.

After spending 19 months in jail on a 12-year prison sentence, Brazil's Supreme Court ruled that Lula had to be freed until his appeals are exhausted. Supporters greeted him enthusiastically and Lula promised to fight the unjust case against him and for social justice in Brazil. 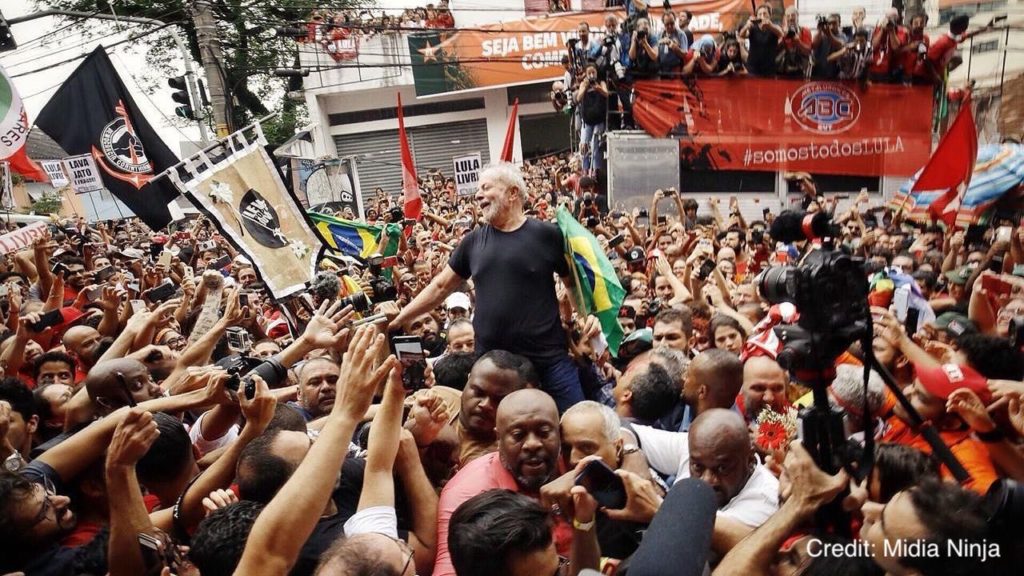 It was a long time coming.

On Friday night he walked out of prison and into the arms of his adoring supporters.

These are the people that stuck by him for 19 months.

They held down a constant vigil just outside the federal prison in Curitiba where he was held.

Each day they called to him: good morning, good afternoon, good evening.

Lula said he could hear their cries in his jail cell and it gave him strength.

Former President Lula: “Thank you for continuing to shout Free Lula throughout these 580 days.”

The vigil became ground zero for organizing around the country.

Supporters came from across Brazil.

Gerson Mattos Shatkoski was one of them, he met his wife at the Free Lula vigil. They now have a little girl.

Gerson Mattos Shatkoski: “We are very proud of this struggle, because the vigil’s resistance made a spark that grew into a fire everywhere to denounce the unjust imprisonment of president Lula.”

In the days leading up to Lula’s arrest in April of last year, Gerson traveled to Sao Paulo, where he joined thousands who vowed to defend Lula in the headquarters of the ABC metalworkers union, where the former president got his start.

For 48 hours, Lula defied his arrest order. Months before he had been convicted of accepting a beach-side apartment from a company seeking government contracts. But the evidence was scant. Lula maintained his innocence, and said the conviction was just a means of blocking him from returning to power. His supporters stood by his side. Thousands of them.

Lula finally turned himself in and was flown to prison in Curitiba, the home of the country’s anti-corruption task force, which came under fire this year after revelations from The Intercept showed anti-left bias in their investigations and convictions.

As the helicopter carrying Lula arrived to the prison, he was greeted by both avid supporters and opponents, who cheered and set off fireworks.

Federal police fired tear gas and rubber bullets into the crowd of Lula supporters. But it did not deter.

The next morning people began to arrive by the busloads. Lula supporters. Members of grassroots organizations, like the Landless Workers Movement. They pitched tents on the sides of the streets. They vowed not to leave until Lula was with them.

Lindbergh Farias, former Senator, Workers Party: “This is a permanent democratic vigil. We will only leave Curitiba when Lula is freed. Freedom for Lula!”

It was the beginning of the vigil that would last until this week.

Gerson Mattos Shatkoski: “This is a tent that we set up, where we have received more than 100,000 people during this period. We have a book here where people have signed in, more than 100,000 from across Brazil, during these 580 days. And for us, this is the minimum that we could do, so that everyone understood, how important Lula is for Brazil, how much he transformed Brazilian society and how proud we are after 580 days to have Lula free.”

Lula remains one of Brazil’s most popular leaders. Millions were lifted out of poverty during his two terms, which ran from 2003 through 2010. He was slated to cruise to victory in last year’s elections. But he was blocked from running due to the corruption conviction. This opened the door for the presidency of the far-right former military captain Jair Bolsonaro.

During Lula’s first speech back home in Sao Bernardo do Campo on Saturday, he railed against Bolsonaro’s widespread privatization plan and his alleged connections with the paramilitaries accused of killing Rio de Janeiro councilwoman Marielle Franco last year.

Former President Lula: “Bolsonaro was democratically elected. We accept the result of the election. This guy has a mandate for four years. Now, he was elected to govern the Brazilian people and not to govern the militia in Rio de Janeiro.”

Though Lula is out of prison, he is not done fighting to clear his name.

He was freed by a Supreme Court decision, which ruled it unconstitutional to imprison defendants before they had exhausted all of their appeals.

Lula’s defense team is working to have his conviction and other cases against him thrown out due to bias by the anti-corruption task force and his jailer judge Sergio Moro, who was implicated in The Intercept revelations, and who is now Bolsonaro’s Justice Minister.

Meanwhile, inequality and poverty are both on the rise. And Lula is now planning to tour the country. He says he wants to once against stand up for the working class, and to rebuild the Brazil that he says Bolsonaro has been working actively to destroy.

Former President Lula: “I want to build this country with the same happiness that we built it when we governed this country. My dream isn’t to solve my problems. Today, I’m a guy that doesn’t have a job, a president without a pension. There’s not even a television in my apartment, my life is totally blocked. The only thing I’m certain of is that I have more courage to fight than before.”