Inequality.org's Sam Pizzigati says a $6 billion presidential campaign by Michael Bloomberg would pay for itself in two years if it would stop a wealth tax.

Inequality.org's Sam Pizzigati says a $6 billion presidential campaign by Michael Bloomberg would pay for itself in two years if it would stop a wealth tax. 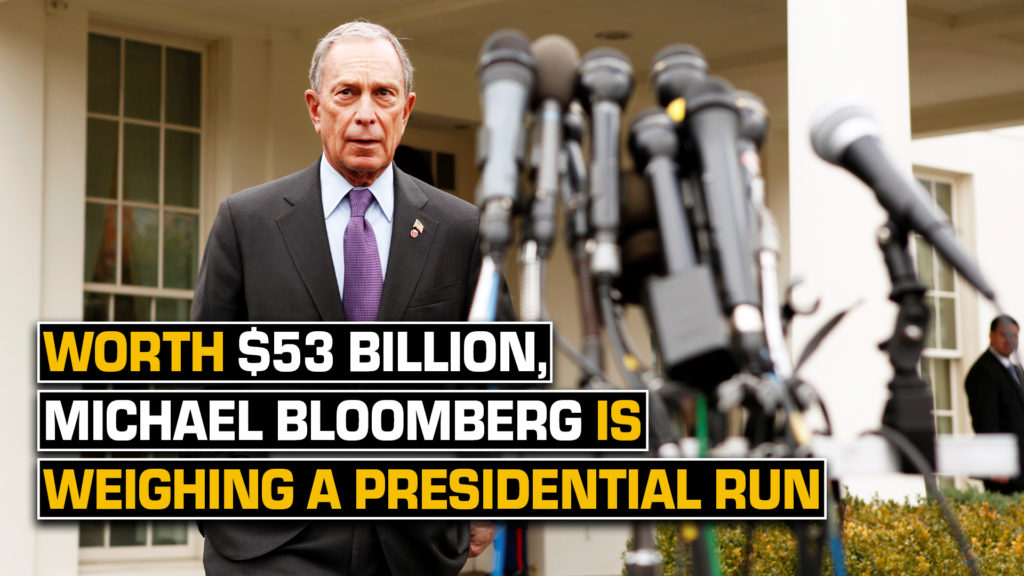 ALEXANDRIA OCASIO-CORTEZ: Billionaires are seeing that the tide is turning in the United States and that we’re going to have to make real structural changes to our country and to our policy, and that may result in things like a wealth tax. It may result in other sorts of changes so that we can start returning to our roots of guaranteeing certain economic rights in the United States.

That was Rep. Alexandria Ocasio-Cortez responding to the news that former New York Mayor Michael Bloomberg may become the second billionaire to seek the Democratic nomination; joining Tom Stier, a hedge fund manager and Democratic activist. A wealth tax proposed by candidates Senator Elizabeth Warren and Bernie Sanders would take up to 4 billion of Bloomberg’s estimated 52 billion in its first year.

Our guest Sam Pizzigati, coeditor of inequality.org, writes: “By stopping either the Warren or Sanders wealth tax, Bloomberg would save over 6 billion in taxes in just two years, enough to cover the cost of a $6.3 billion presidential campaign.” That’s from his new piece: Michael Bloomberg Bought Gracie Mansion. Could He Buy the White House? out on inequality.org. Thanks so much for joining us.

JAISAL NOOR: So the essential theme in this race for the democratic nomination is on one side, you have Warren and Sanders who want to tax the rich. They’re hosting big rallies and raising lots of money from small donations. On the other spectrum you have the front runner, Joe Biden, who’s inspiring confidence in no one right now. And by some accounts, that’s why you have Bloomberg thinking about throwing his hat in the ring. He’s already registered in several of the early states. Let’s start with his tenure in New York and what’s behind this potential run.

SAM PIZZIGATI: Well, I think what’s behind this potential run is a fear that either Bernie Sanders or Elizabeth Warren might actually end up to be the next president of the United States. And people like Michael Bloomberg, billionaires like Michael Bloomberg, see that as a real threat to the United States that has helped them become so awesomely affluent.

JAISAL NOOR: And you write about just how much Bloomberg spent for his three terms and I was a reporter at the time in New York city. And not only did he serve two terms and served eight years, but he got the rules changed so he could serve a third term. And what Juan Gonzales–formerly of the New York Daily News and of Democracy Now!–reports is that part of how he did this was he gave enormous amounts of money to nonprofits all across the city, who then testified on his behalf in front of the city council without disclosing that they had all received tons of money from him.

SAM PIZZIGATI: That’s right. That money that those organizations received did not count as campaign spending from Mr. Bloomberg, from Mayor Bloomberg. So if you look at just that campaign spending, in 2001 he spent $74 million, which came to $99 per vote that he received. In 2005 in his first reelection campaign, he spent even more. He spent $112 per vote he received. And in [2009] after he got rid of the problem of term limits, he spent $174 per vote to get elected. Those are fantastical sums that have never been before equaled in a local election in the United States. So the big question is: Could he afford to spend money that lavishly at the federal level, at the national level?

JAISAL NOOR: And so you argue that he could actually save money even if he spends an enormous amount on a national campaign, even if he doesn’t win, even if he just prevents Warren or Sanders from winning that would actually benefit him even just the over in a couple of years.

SAM PIZZIGATI: That’s right. The arithmetic is really fascinating here. Donald Trump, in the [2016] election cycle, he received 63 million votes. So if Bloomberg spent $100 per vote to get what he would need to be elected as Trump was elected, he would need to spend $6.3 billion. He has a fortune of $52 billion. He can easily afford a $6.3 billion expense. But the reality is he doesn’t have to spend that much at a national level to make a huge impact. Donald Trump only spent $325 million in his [2016] primary and general election campaign. And Bloomberg’s top aide has said that the Bloomberg people see 500 million as a starter campaign, a budget for themselves, a budget that would take them through the first three months of the campaign. So Bloomberg wouldn’t need to spend near $6 billion to make the impact that he wants to make.

JAISAL NOOR: And it’s not just Bloomberg that’s raised concerns about a potential wealth tax. I want to turn to a clip of Bill Gates with, from an interview with the New York Times last week. His net worth is over a hundred billion dollars. Here’s a clip.

BILL GATES: Since I paid more than anyone in taxes, but I’m glad to have… If I’d had to pay $20 billion, that’s fine. But when you say I should pay 100 billion, okay, then I’m starting to do a little math about what I have left over. Sorry. I’m just kidding.

JAISAL NOOR: Gates was then asked who he would support if Elizabeth Warren won the nomination and he wouldn’t give a straight answer. Here’s that clip.

JAISAL NOOR: The more professional candidate. So it’s interesting because Gates along with Bloomberg are considered “good billionaires” because they give away tons of money to philanthropic causes. And in Bloomberg’s case, he spent time and effort trying to address climate change and gun control. And their argument is that they can spend their money better than the government can. That is essentially their argument. What’s your response to that?

SAM PIZZIGATI: Well, it’s a question of power. Great wealth creates great power. Who should control that wealth? In a democracy, we say that people should share power, but when billionaires have such an incredible concentration of the nation’s wealth, that threatens the very idea, the very practical reality of what democracy can be. It’s very interesting that if you look at the Forbes 400, the annual list the business magazine Forbes puts out of the 400 richest individuals in the United States… Forbes put out its  first list in 1982. Since then, the wealth of the richest 400 people in the United States after you take inflation into account has increased by 32 times. That’s an incredible concentration of wealth and incredible concentration of power; and that’s a danger. That’s a dagger into our democracy, the idea that the people should rule.

JAISAL NOOR: And it’s of course worth mentioning that this accumulation has taken place in the last 30 or 40 years. Prior to that there were policies in place that that kept agreed in check that prevented these massive accumulations. And those were also the times when we had, as as AOC has made the case and others have made the case, those were the times we had universal programs where we didn’t have this extreme inequality. We were able to fund things like universal college free tuition in places like New York where they have CUNY. And so, you know, this isn’t a radical new idea. This is returning things to the way things were and the ways that things existed for a long time.

SAM PIZZIGATI: Yes, the distribution of income and wealth in the United States has changed enormously. And I don’t think people realize how that change has been. Back in the middle of the 20th century, the United States and Japan, to give one example had similar distributions of income and wealth. But now we have become phenomenally more unequal. And Japan has essentially stayed relatively the same. So if we had the same distribution of wealth in the United States today as Japan does, the average a net worth of the individual American adult, which is now $66,000 would be just under $200,000. So in other words, we’re paying in an inequality tax in the United States. Our net worth of average Americans would be three times higher than they actually are today, if we were as equal as a nation like Japan.

JAISAL NOOR: All right. We want to thank you so much for joining us.

JAISAL NOOR: And we’ll link to your piece. Michael Bloomberg Bought Gracie Mansion. Could He Buy the White House? That’s out on inequality.org. Thanks so much for watching.