Joe Biden's Criminal Justice plan is a band aid on an open wound he helped inflict, particularly on poor Black and brown communities. Kamau Franklin and Jacqueline Luqman take a closer look at the contradiction

Joe Biden's Criminal Justice plan is a band aid on an open wound he helped inflict, particularly on poor Black and brown communities. Kamau Franklin and Jacqueline Luqman take a closer look at the contradiction 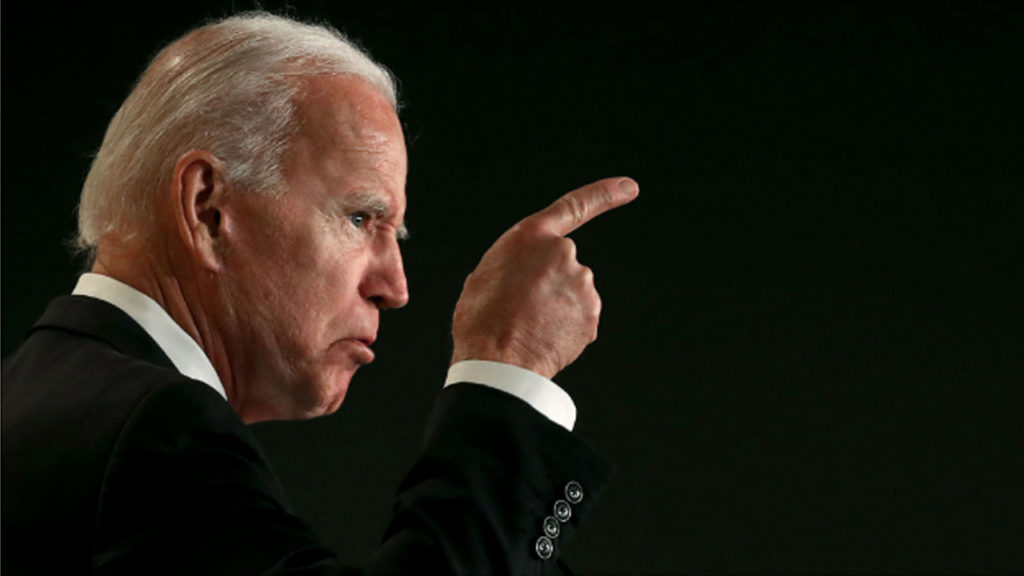 FORMER VICE PRESIDENT JOE BIDEN This very day, violent drug offenders will commit more than 100,000 crimes on this day alone. In a nutshell, the president’s plan doesn’t include enough police officers to catch the violent thugs, not enough prosecutors to convict them, not enough judges to sentence them, and not enough prison cells to put them away for a long time.

JACQUELINE LUQMAN This is Jacqueline Luqman and this is The Real News Network.

That was Joe Biden back in 1989 talking about his focus or the focus that he felt needed to be placed on how to address crime, the growing crime problem in many cities across America. But now, Joe Biden is announcing his criminal justice plan that he intends to campaign on and that he claims he will implement if he is president to address some other issues.

JOE BIDEN CAMPAIGN AD It’s time we put justice back in criminal justice. Look, too many people in this country are incarcerated, and too many of them are black and brown. That’s why Joe Biden’s proposing a comprehensive plan to reduce our prison population, reform the juvenile justice system, eliminate racial disparities, and make our communities safe.

JACQUELINE LUQMAN Well, this is the Trending Topics panel and we’re going to discuss Joe Biden’s new criminal justice plan that he recently announced. Some are calling his plan “radical” [laughs] while others are criticizing it as a Band-Aid on an open wound that Joe Biden himself helped to inflict— particularly on poor black and brown communities. But what’s in Biden’s criminal justice plan, and will his proposals deliver what he promises they will?

Here to talk with me about this today is Kamau Franklin. Kamau is an attorney and the founder of Community Movement Builders, Inc., a grassroots organizing group, and a co-host of Renegade Culture, a podcast that covers news and current events affecting and involving the black community. Kamau, thank you so much for joining me.

KAMAU FRANKLIN Thanks for having me.

JACQUELINE LUQMAN So let’s just get right to it. I have to get your thoughts on the campaign ad, the campaign video we just showed with Symone Sanders announcing this plan. What are your very first off-the-top-of-your-head thoughts?

KAMAU FRANKLIN [laughs] Well, you know what? At first, I’m going to say something kind to the Democrats. It’s good to be in an era where instead of the Clinton and Obama days where the emphasis was telling black folks to pull up our pants, and that our social conditions were our fault, to see Democrats fighting over each other to move a little bit to the left on renouncing some of their past activities in some ways, and actually at least talking about criminal justice reform, is a better thing than not. Now with that compliment said, it’s hard to take Joe Biden seriously and/or his campaign surrogates.

JACQUELINE LUQMAN You know, I’m going to try not to laugh during this segment [laughs] because reading through this criminal justice plan that Biden has, his proposals may seem comprehensive on the surface, but they’re actually quite laughable especially in the context and against the backdrop that you just mentioned that we cannot take Biden seriously because of his legislative record, because of his own branding of himself focusing only and almost exclusively on the fact that he was the Vice President of the first black President of the United States. But we do have to take a serious look at this criminal justice proposal that he’s put out because of the backdrop of his legislative history and going back to the things he said on the record in 1989, in ’92 and ’93, as we saw at the top of the segment.

But when we look at the language of Biden’s campaign, his criminal justice reform package, it says on his web page that “As president, Joe Biden will strengthen America’s commitment to justice and reform our criminal justice system.” But let’s be reminded again, back in ’94 Biden said— and this is from The New York Times and was recently published again in a New York Times article— “Every time Richard Nixon, when he was running in 1972, would say ‘law and order,’ the Democratic match or response was ‘law and order with justice’ — whatever that meant. And I would say, ‘lock the SOBs up.'” That’s what Joe Biden said about criminal justice or the approach to criminal justice, speaking about his own party back in ’92. So—

KAMAU FRANKLIN Yeah. I mean, let’s remember that Joe Biden comes from that history — I’m sorry to interrupt but — Joe Biden comes from that history. Where, as he’s talked about himself, where moderation for Democrats was key, for him moderation meant that they all agreed on what should happen to black people was that whether or not we had jobs, there was a criminal element that had to be prosecuted, that the way to solve individual issues in any community was to prosecute, to lock up. Part of his own reform is to undo things that he helped usher in in the first criminal bill back in the Clinton days, i.e. taking away the reduction between sentencing of crack cocaine and powder cocaine. So here’s a man, again, who comes from a history where moderation meant they all agreed that criminalizing, locking people up, and longer sentences was what was good in terms of justice.

JACQUELINE LUQMAN So Kamau, it didn’t matter why people committed crime then. He just wanted to take them off the street because, you know, everybody was hitting his mother over the head, or accosting his sons, and, you know, that kind of thing. But now, he is focusing his criminal justice plan on these core principles that he has highlighted on his website. Now, I think the easiest way to really take a look at what Biden is saying and why it’s so problematic is to kind of take each section piece by piece, as painful as that might be. [laughs] But I want to start with his views on intervention, his plans to prevent crime. He says that he wants to create a $20 billion competitive grant program to shift the state’s focus from incarceration to prevention. When I hear the words “comprehensive grant,” that sounds like block grants to me. Are—

KAMAU FRANKLIN Yeah. I was going to say I think that’s exactly what this is. These are competitive block grants. Remember, these will be distributed if they’re—Or if they’re even enacted to be honest, right? They’ll be distributed and each state will then get a chance to implement them the way they see forth. And so, if states see other tendencies as to why someone is socialized towards A, B and C, they will enact whatever grants they get differently than another state. So to suggest somehow that this is some panacea effect across state lines based on what these block grants will supposedly do, I think again is just a shot in the dark for Biden using the up-to-date rhetoric that I think his campaign affiliates and staffers have helped him with and come up with. Some new ideas that fit into the time period that we are in today, as opposed to his rhetoric 30 or 40 years ago.

JACQUELINE LUQMAN And specifically, the issue with block grants is particularly problematic because basically the states get to do what they want, regardless of what actually has been proven to work. As you said, if states see fit to implement programs that they believe create a different outcome that they think is more beneficial one way or the other, it doesn’t matter what actual data says, they have the money, they are in control of it, so they get to do what they want. So how does that help?

KAMAU FRANKLIN Yeah. I think that’s completely accurate. I think usually with black grants, even when there are stringent requirements that say this money has to be spent A, B, C, some states will reject these grants outright and won’t use them at all because they feel like they won’t go towards whatever their intended purposes are for what the state desires that it wants. And even further, states usually will have a lot of room to say, you know for us, crime prevention will be— guess what? More police on the street. That’s where we think this should go, or should go into more PAL programs that are controlled by the police, so they won’t necessarily look deeply into what the issue is. And so, then you have this uneven effect, if any effect whatsoever.

So I think the block grants and the rhetoric associated with it seem to me to be, again, an updating of Joe Biden’s platform based on having better surrogates and better campaign staff than he did 30 or 40 years ago. But this is not a comprehensive plan to lower incarceration and/or a comprehensive plan that will do something in the community to bring more jobs, more businesses, business opportunities, more cooperatives, more stakeholders in, which will have a better effect on outcomes when we talk about things like crime or socialization.

JACQUELINE LUQMAN And another aspect of this intervention part of Biden’s criminal justice plan that is very interesting, is his focus on increasing funding to allow for more mental health access, more mental health treatment, more psychologists, school sociologists, counselors in schools, and particularly focusing on having mental health professionals train police officers to respond better to people with mental health challenges. Now, that sounds very interesting to me, but I’m not going to give my opinion because I want to hear what your opinion is on that aspect of Biden’s criminal justice plan and why that’s problematic.

KAMAU FRANKLIN Well, I think the pathology associated with mental health treatment for folks who are the victims of American oppression, systematic injustice, to me goes towards the wrong ends on which you should solve this problem can be solved. This, again, plays into a moderate base that suggests, oh these people if they were only trained to act a certain way, would not be doing some of these activities— as opposed to looking at the bigger picture of lack of resources, lack of economic opportunities, lack of control over institutions and communities. And so, I think the idea that somehow mental health officials, particularly within schools need to focus on these young people, is missing the boat about what the larger issue is.

JACQUELINE LUQMAN Now, there is so much more we could delve into in just the intervention section of Joe Biden’s criminal justice plan, but we are out of time in this segment. But please stay tuned for the next segment because we’re going to get into the meat of the matter, specifically the meat of what is the matter with Joe Biden’s criminal justice plan and that is the section where he addresses racial bias and injustice. But right now, I want to thank you, Kamau Franklin, for joining me for this segment.

JACQUELINE LUQMAN And thank you for watching. This is Jacqueline Luqman with The Real News Network in Baltimore.

Why Do Black People Always Have to Forgive?