In an unusual move, the Berkeley police Department made public the mug shots and names of counter-protesters they arrested, who had come to oppose a far-right demonstration. Was this an effort to intimidate leftists and to favor the far-right? We discuss the action and  implications with UC law professor Veena Dubal

In an unusual move, the Berkeley police Department made public the mug shots and names of counter-protesters they arrested, who had come to oppose a far-right demonstration. Was this an effort to intimidate leftists and to favor the far-right? We discuss the action and  implications with UC law professor Veena Dubal 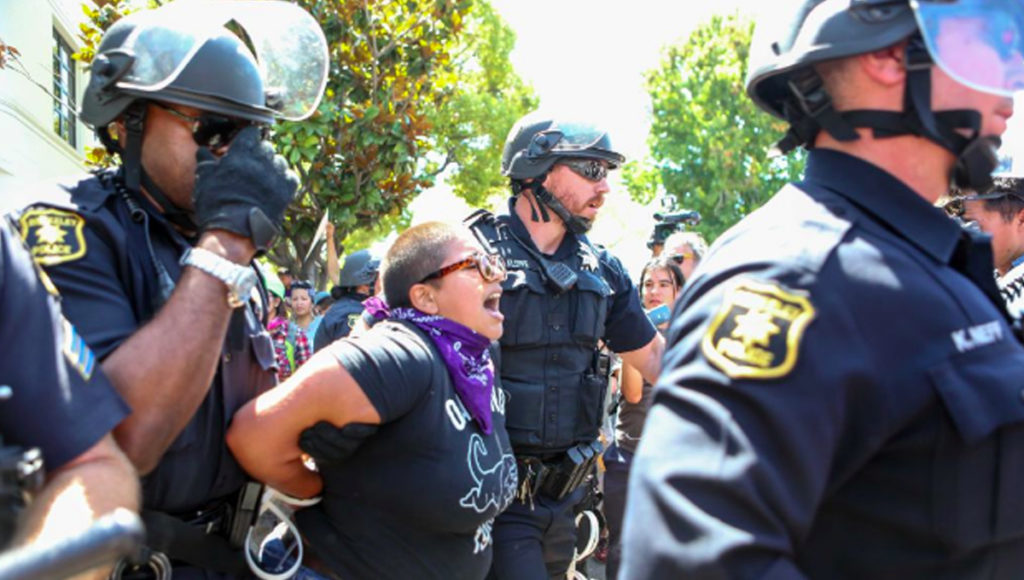 Last Sunday, Berkeley police arrested over 20 protesters, all of whom turned out to be counter-protesters against an alt-right demonstration in Berkeley. Not only that, the police department posted the names and mugshots of those they arrested in their Twitter account. The highly unusual action of the police department sparked immediate outrage in the Berkeley community and beyond.

Joining me now to discuss this incident, and to discuss its broader implications, is Veena Dubal. Veena is a university professor, a University of California professor of law at Hastings, and a former Berkeley police review commissioner. Thanks for joining us today, Veena.

VEENA DUBAL: Thank you for having me.

GREG WILPERT: So first give us some more detail as to what exactly happened. That is, who was protesting against what, and what do we know about what they’re being charged with?

VEENA DUBAL: So it was a white supremacist rally that was happening in Berkeley on Sunday called the No to Marxism rally that was really sort of bringing out, bringing out what, you know, some folks in the media call the alt-right, but really are the, are more accurately described as white supremacists. And then there were a lot of counter-demonstrators. I wasn’t at the event myself. My recollection is based on media reports. But there were a lot of counter-demonstrators. And before the event happened, the Berkeley Police Department put out an alert essentially saying that they were going to crack down at the event. And that if you were carrying a weapon that you would be arrested.

The problem was that in the small print, the way that they defined what a weapon was was essentially anything that could be used to incite a riot, which is an incredibly subjective definition of what a weapon is. You could say a pen might be used to incite a riot. You could say a mask might be used to incite a riot. It wasn’t the traditional definition of a weapon. They ended up arresting, I think, about 20 people, at least on the counter-protesters side of things, that people who had come to stand up against the white supremacists. I’m not sure anyone was arrested on on the alt-right side. But we do know exactly who was arrested on the counter-protester side, because that evening the Berkeley Police Department posted one by one the individual names, mugshots, ages, and locations, cities of the folks who had been arrested that were there to protest against the No to Marxism rally.

And, and this was troubling, when I saw this, for a number of reasons. One, because it was not viewpoint neutral. They were not, this is not something the Berkeley Police Department typically does. They don’t tweet out the names, addresses, alleged criminal acts, ages, mugshots of people who are arrested in the city of Berkeley. And so it was strange. And they only did it for the folks who were who were arrested who had been part of the counterprotest. It’s also troubling because we don’t know, you know, these people have not been convicted. I’m not even sure that many of, all of them were officially charged by the prosecutor. And so it sort of, although it’s public information, the way in which it was disseminated made it much easier to target them, if people wanted to target them.

And so it put the, the second thing that was really problematic is that the role of a police department is public safety. And I’m not sure that they were achieving that by by outing these people, publicly shaming them. Again, it wasn’t viewpoint neutral. And it didn’t seem to be about public safety. It seemed to be about public shaming. And that was troubling to many of us.

GREG WILPERT: So, Veena, did the police department give any kind of explanation as to why they did this? I mean, it sounds very highly unusual. And if they, I mean, what other- I mean, you mentioned that the other part of this might have been public shaming. But exactly- I mean, I presume that most people are proud to be at a counter-protest against them. So what are the other possible motivations behind this?

VEENA DUBAL: Yes. So I think that a huge motivation behind this was to say, look, if you, if you are going to engage in protest in this way in the City of Berkeley, then we are going to out you in this way to send a message to people who want to protest. And you know, I think that there are chilling free speech implications of this. It might be that in the future people are scared to go to a protest in Berkeley because of this. Again, we don’t know whether the people who were arrested actually did anything wrong. They might have. They might have brandished real weapons. They might have destroyed public property. But we don’t know these things.

We don’t know them because of how the police department defined ‘weapon.’ And we don’t know them because these people have not been convicted by a court. And so I think that the implication here is that there’s a, there’s a larger chilling effect on free speech. There is a message being sent, or at least that I received, that the Berkeley Police Department, whoever has their Twitter account, whoever’s in charge of their Twitter account, is more supportive of the the people who were holding the rally, the alt-right, than the people who were there to protest the rally.

And you know, since- as you know, I was quoted in the initial article by The Guardian that talked about this. And since then I have received dozens of hate messages and hate mail on my work mail. And what’s interesting is that, I mean, many of them are violent messages, talking about how people are going to kill me for this position. But it seems to have really upset people that, that there could be any critique of the police department taking a stand in a very volatile protest. And so it’s troubling.

GREG WILPERT: Some people I saw have suggested also that perhaps there’s some kind of cooperation going on, not just between the police department in Berkeley, but police departments across the country, and perhaps far-right wing groups. Do we have any evidence of this? I mean, of course there could be, one could say, perhaps legitimately, that there is some implicit or tacit cooperation. But what do we know about the kinds of connections that exist between police and far-right groups?

VEENA DUBAL: I have no evidence of this in Berkeley. But certainly in the last few days in Portland, and given what happened in Berkeley with the Twitter feed, there are concerns, there are real concerns that the police forces are taking sides, viewpoint sides in these protests. And you know, this is not something that I think the state can be neutral about. If there are people that are spewing violent, racist hate, then at the very least, state officials should be should be protecting those who are coming to protest that.

GREG WILPERT: We’ll continue to follow this. I was speaking to Veena Dubal, University of California law professor at Hastings. Thanks again, Veena, for joining us today.