Billionaire ‘King of Bankruptcies’ to Head Commerce Under Trump

Despite promises to 'drain the swamp,' Trump chose a man for Deputy Secretary of Commerce who enriched himself at expense of labor and consumers and shipped jobs overseas, says University of Missouri-Kansas City professor Bill Black

Despite promises to 'drain the swamp,' Trump chose a man for Deputy Secretary of Commerce who enriched himself at expense of labor and consumers and shipped jobs overseas, says University of Missouri-Kansas City professor Bill Black 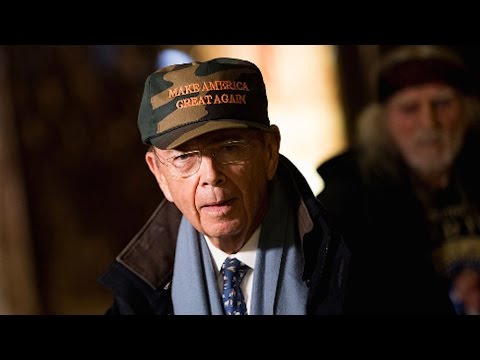 JAISAL NOOR: Welcome to The Real News Network. I’m Jaisal Noor in Baltimore. Thanks for joining us again. We’re continuing our conversation. This is Part 2 of our chat with Bill Black. Bill is an Associate Professor of Economics and Law at the University of Missouri-Kansas City, white-color criminologist, former financial regulator, author of The Best Way to Rob a Bank is to Own One. Of course, a regular contributor to The Real News. Thanks so much for joining us again, Bill.

Bill, in Part 1 we discussed Steve Mnuchin. Let’s go to Wilbur Ross, Trump’s pick for Commerce Secretary. Trump called him “the champion of American manufacturing”. He’s tasking him with cutting regulations and also unleashing America’s energy resources. What can you tell us about him?

BILL BLACK: This is the primary swamp denizen that Trump promised to drain the swamp; instead, he’s going to take all the creatures from the lagoon and put them in charge. Ross is the king of bankruptcy. He’s also the king of running mines — coal mines that killed people. So, you know, he’s actively anti-labor. He has no interest in protecting consumers. As you said, he is going to be charged with deregulating and we saw what that has done every time they’ve done it — in the savings and loan debacle, in the Enron and then in the most recent crisis. So, these are people — it’s wrong to say that they haven’t learned nothing. They’ve learned exactly that they made a fortune out of the deregulation. They make it on the upside during the Bubble, and as we discussed in the last episode, they make it on the downside, after the Crash, through their foreclosures, and in the case of the commerce nominee, they make it through the failures of bankruptcy. And then, of course, Trump has said that he is one of the kings of bankruptcy and of screwing creditors in the process. Well, he’s actually small fry compared to Ross.

JAISAL NOOR: Ross considers himself a savior of industry, like steel, and The Wall Street Journal reports that even some of his former adversaries have credited him with saving factories and even pensions for workers that might have been cut during his acquisitions and his reselling of those factories, one of those was right here in Baltimore, Bethlehem Steel; in the early 2000s, he bought it, and sold it in 2005. And his argument is that these would’ve been liquidated, “I helped negotiate with unions and other stakeholders, and I got people their jobs back.”

That’s sort of how Trump’s selling him. He’s going to help bring back industry. How do you respond to that?

BILL BLACK: Right. So, that negotiation with labor and with creditors, well, again, that’s the same thing Trump does in bankruptcy. He first takes the cash out, then he says to his creditors, “Look! You could demand your pensions and you could demand to be paid and such, but if you do, it will all collapse. And so, I want a special deal in which I don’t have to pay back most of my debts. I get to keep all those profits I got in the past, but I don’t want to pay back my debts.” And the bank gets the old joke that if a bank loans you $20,000, the bank owns you, but if the bank loans you $200 million, well, then you own the bank. You have the leverage as the debtor because they don’t want to recognize this bad debt loss, and there are special accounting rules — it’s called a troubled debt restructuring — that don’t require you to recognize the losses immediately when you do one of these bailout deals. So, that’s what he’s actually king at.

To say that that means that the place survives, well, it would’ve survived anyway out of bankruptcy. The assets still exist. The workers still exist. So, the difference is this makes the hedge fund guy incredibly rich, and hedge fund guys are — and they are richly all guys — are, by far, the richest people. And, you know, people complain about Goldman Sachs. I complain about Goldman Sachs, and the salaries. But the hedge fund guys often make 10 times more than the CEOs of major banks. And, by the way, hedge funds have been out-performed by the general market, I think, this is the seventh year in a row, or so. So, they get them that massed amount of money not because of competence, but because, basically, they skim money off of these funds. They charge really disproportionately high funds [sic], and nobody complains as much because they’re mostly taking it from other incredibly wealthy people. The typical person investing in these hedge funds has net worths measured in the hundreds of millions of dollars.

JAISAL NOOR: And part of what Wilbur Ross does, as well, is he often shifts jobs overseas, something that Trump has railed against from day one in his campaign. What could that mean for his role as the Commerce Secretary?

BILL BLACK: Well, that means yet another one of those campaign promises that was simply for the suckers. They’ve put the people in charge who have rigged the system over the last 30 years and that’s hardly a surprise since Trump is exactly one of those people that survives solely because of inherited money and then a rigged system when he screws up the investments, which he does on a routine basis.

JAISAL NOOR: Just for our viewers, he was also involved in resurrecting Trump’s casino business when that was failing, and Forbes ranks him as the 232nd richest person in the world. He’s worth about $2.9 billion. Bill Black, thanks so much for joining us.