The Baltimore school board rejected the proposal amid heated debate. Meanwhile, we get a response to an ACLU and NAACP-LDF letter demanding Maryland adequately fund Baltimore schools

The Baltimore school board rejected the proposal amid heated debate. Meanwhile, we get a response to an ACLU and NAACP-LDF letter demanding Maryland adequately fund Baltimore schools 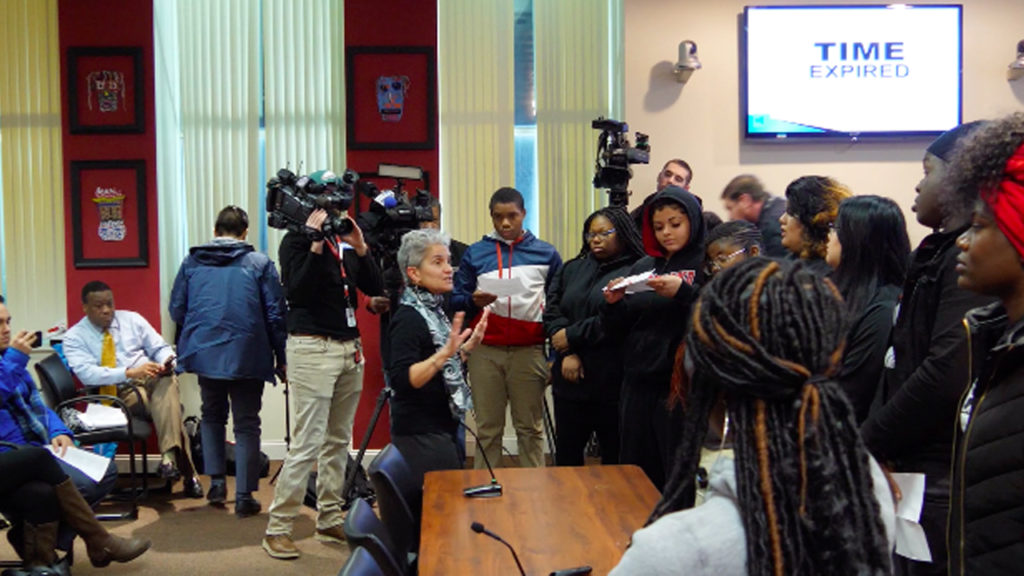 KATIE AREVALO, BALTIMORE ALGEBRA PROJECT: Think about who these schools serve. These schools serve students. And students say, no, you need to rethink why it is that you think putting guns in schools is OK when a collective body of students, who the schools are created for, is saying no.

JAISAL NOOR, REPORTER AND PRODUCER: A heated debate raged at Tuesday night’s Baltimore school board meeting, mirroring a national controversy: whether to arm police in schools.

CLYDE BOATWRIGHT, PRESIDENT OF BALTIMORE SCHOOL POLICE FOP: It’s like we’re a bunch of animals that just can’t wait to get a hold of kids, and that couldn’t be further from the truth. You know, our men and women are proud, professional people. It’s a proud organization. You know, we can go anywhere in the state of Maryland and be police officers, but we choose to stay here.

KIMBERLY HUMPHREY, LEGISLATIVE COUNSEL, ACLU-MD EDUCATION: There is no meaningful data that supports the claim that having SROs increases school safety, or lowers violent crime. But there is substantial data that even one instance of police contact increases the likelihood that a young person will be further involved in the juvenile system, or fall behind, or drop out.

JAISAL NOOR: The board was set to vote on a measure authorizing cops to carry guns during school time when a dozen youth with the Baltimore Algebra Project took over the meeting to demand youth voices be heard.

PROTESTER: We are not going to stop until we are allowed to talk to all of our demands. We have five demands. And then once we’re done, you all can go.

KATIE AREVALO: We don’t talk about like not having any kind of accountability or any kind of safety for students, we just talk about a different form of safety that doesn’t include police officers with guns. We think that restorative practice is a great way for us to do this.

JAISAL NOOR: A proposal by Maryland State Delegate Cheryl Glenn would allow officers to carry guns during school hours. When the board reconvened, it voted ten to zero to oppose the measure. Delegate Glenn confirmed with The Real News she’d be withdrawing the measure. Consensus was needed between the mayor and the school board, she said.

NEWSCASTER: Well, here you go. A teacher getting punched in the face by one of her students.

JAISAL NOOR: Citing recent incidents of violence inside of schools, several community members and police officers spoke in favor of the measure.

BALTIMORE SCHOOL POLICE OFFICER: I want to ask for your support in favor for arming the school police officers on a full-time basis. The men and women of this department needs to have the ability and able to do their jobs if or when the time presents itself.

SECURITY SPECIALIST: None of you have ever held a dead child, and I hope you never have to. If that’s the case, all this banter about what does and what could be and what likely could be, doesn’t even make a difference. You did nothing to stop what could have happened.

COMMUNITY MEMBER: We didn’t tolerate the foolishness that’s happening now in our city with regard to our students beating up teachers, et cetera. I don’t want to get off track, but what I’m suggesting is that we’re not tough enough.

SEEMA SHAH-NELSON, PUBLIC SCHOOL PARENT, ADVOCATE: According to a Washington Post investigation from March, in almost every single one of the school shootings since 1999 where there was an armed school police officer, the officer was not able to intervene before the shooting was over, either because there were too many students nearby or because they couldn’t get there in time.

JAISAL NOOR: …and argued arming officers would do more harm than good.

JAISAL NOOR: Both the Baltimore City Police Department and school police are currently under federal consent decree, after the Department of Justice uncovered a widespread pattern of racist policing in the city. Some also argued the school district has more pressing needs.

MELISSA SCHOBER, PUBLIC SCHOOL PARENT, ADVOCATE: It is simply the case that there is a limited amount of political capital, and expending it with a city delegation to arm officers over funds that support heat and light for our students is immoral.

JAISAL NOOR: Earlier in the day, the ACLU of Maryland and the NAACP Legal Defense Fund sent a letter to Governor Hogan to demand Baltimore schools receive adequate funding.

DANA VICKERS SHELLEY, EXECUTIVE DIRECTOR, ACLU, MD: Well, of course we’re talking about is what is constitutionally adequate. It’s very important to understand that, because we know that our children need so much to succeed, as all children do. The state’s own figures show that there is an adequacy gap of at least 258 million dollars, and the Kirwan Commission’s study shows approximately upwards of more than 350 million dollars in that, again, that adequacy gap.

JAISAL NOOR: A possible precursor to a new lawsuit over the state’s failure to adequately fund its schools.

DANA VICKERS SHELLEY: Well, that will depend on what we hear with and from the governor, from the state of Maryland. What is most important, and I’m glad you pointed out the Bradford lawsuit, because that was filed in 1996, that was 20 years ago. Our children in Baltimore City can’t wait any longer, can’t wait for adequate funding, constitutionally adequate funding for schools, for heat, for clean water.

JAISAL NOOR: We reached out to the governor’s office for a response and they noted the governor’s budget included an additional 11 million dollars over what current funding formulas mandate due to the city’s declining enrollment.

LARRY HOGAN, MARYLAND GOVERNOR: However, our budget ignores those legislative recommendations and restores all of this important funding.

JAISAL NOOR: Five schools were closed in Baltimore Tuesday due to frigid temperatures or flooding. Last winter, over 60 schools were closed due to freezing classrooms, many pointing to billions in backlog facilities repairs. Still, despite all the school system’s considerable challenges, the focus was on guns, a fact many said would do little to help the city’s education system achieve its primary goal, helping students learn.

JAISAL NOOR: For The Real News, this is Jaisal Noor in Baltimore.