Educators gathered in Leeds to share strategies on how to combat growing racism, xenophobia and and Islamophobia across the UK

Educators gathered in Leeds to share strategies on how to combat growing racism, xenophobia and and Islamophobia across the UK 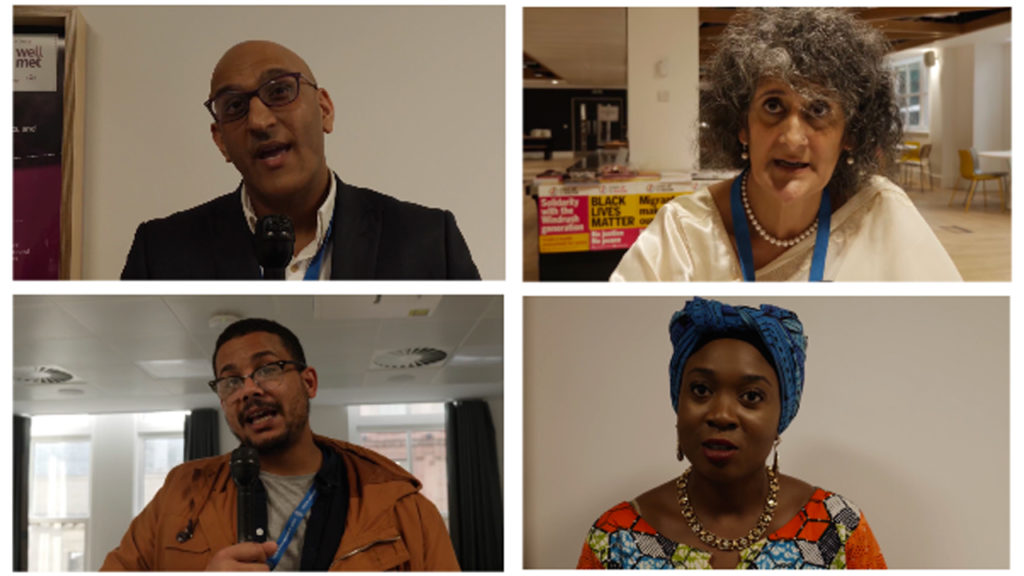 JAISAL NOOR: The far-right Football Lads Alliance clashed with antiracist and antifascist counterdemonstrators in London on October 13; another sign of the growing xenophobia and the response to it across Europe. Four hours to the north, a different kind of gathering was underway in the city of Leeds. Dozens of educators gathered to learn how to challenge racism in schools, organized by the local chapter of the National Education Union, even as its members were marching in London against the far right.

DANIEL KEBEDE: So at the moment I know that there are union banners in London opposing the DFLA, which is, it’s called the Football Lads Alliance. It’s like an alt-right group that you’d get in America. That’s its manifestation here. Supported by Bannon, so it’s the same sort of thing. And our union is campaigning against that, as well.

JAISAL NOOR: Why is it important to do that?

DANIEL KEBEDE: Well, I mean, there’s moral reasons for why racism is bad, isn’t it? It’s not very nice. But I think from a union point of view, racism divides black and white workers, doesn’t it? And we want to fight for the rights of everybody.

So what you find is actually, from a union point of view, racism harms white workers as well as black workers, because it divides them. So it harms both, because if you are divided you can’t fight for pay as effectively. You can’t fight for better housing, or better terms and conditions.

JAISAL NOOR: The event was organized to give educators practical tools to combat racism, xenophobia, and Islamophobia.

KAUSER JAN: Whether they’re from a personal perspective of a woman who came and spoke about her father that was murdered by the far right; we talked about Islamophobia. We’ve talked about making sure that the curriculum isn’t Eurocentric. We’ve thought of a range of speakers, and we’ve put together different workshops about challenging racism and diverse curriculum; about challenging Islamophobia; ensuring that we are challenging colonization and colonial attitudes within the curriculum, as well as ensuring that we are teaching for an inclusive environment and welcoming refugees.

JAISAL NOOR: Presenting at the conference was Marvina Newton, founder and CEO of Angels of Youth, a charity that aims to lift up young people from disadvantaged backgrounds to help challenge inequality.

MARVINA NEWTON: Well, when the curriculum doesn’t look like me, sound like me, feel like me, then I am told already by a system that I do not exist in the higher picture.

JAISAL NOOR: The conference also offered a workshop on countering Islamophobia in the classroom. There has been a nearly 30 percent rise in hate crimes in Britain in recent years, especially around the 2016 Brexit vote. Far-right supporters of leaving the EU openly campaign to exclude or expel immigrants.

SHAHAB ADRIS: We’ve noticed a spike periodically with Islamophobia and racism. So we had Brexit, the campaign of Brexit. The Donald Trump campaign, for example, contributed to a spike of hate crimes against those perceived to be immigrants, or Muslims. The other- whether the Sikh community, or the Hindu community, the Jewish community, of course, to have been victims of anti-Semitism at the same time, as well.

JAISAL NOOR: Speakers emphasized the need to give students the tools they need to combat racism and Islamophobia.

SHAHAB ADRIS: We also, very importantly, provide media literacy training. I think this is neglected from a young age. Why did I have to wait to go to college or university to learn about politics, and to learn about the media? It should be taught at school how the media represents certain communities, how the media works, who owns it, what the political, sociological, economic orientations are, you know, within the media system. And politics, what systems we’re living in, and what alternative systems that are, that have been. What democracy looks like, what our rights are as active citizens. This should be taught from a very, very young age, and we aim to do that.

JAISAL NOOR: Black teachers in England, like the United States, are underrepresented in the classroom. Only 3 percent of English and 6.8 percent of American teachers are black, compared to student populations at least double those numbers.

JAISAL NOOR: And so I understand that in recent years there’s been austerity measures on government programs, including schools. What impact does that have, and do you support what Jeremy Corbyn has proposed as an alternative for Labour?

DANIEL KEBEDE: Yeah. Definitely, so … Austerity has been in place for eight years now, and it’s not worked. It’s not done what the government wanted. So debt’s still rising, the government books don’t balance. And what we find is it’s causing some real hardship for people. So you got millions of people using food banks. Children- the amount of children. There’s now millions more children living in poverty than there was before.

So this is not an environment that is going to create a prosperous nation. You know, if your children are hungry, and they’re poor, they’re our future. You know, they’re not going to grow into the well-rounded individuals that we all need them to be. So austerity’s failed. It needs to end. And do I support Jeremy Corbyn’s program? Well, yeah, absolutely, support that. I think, you know, the wealthy of this world have been able to get away with too much, and it’s been at a cost to the vast majority of people.

JAISAL NOOR: England’s major teachers union, with over half a million members, is preparing for a possible strike next year against cuts in austerity measures.

DANIEL KEBEDE: You know, again, most teachers are going to have a real time pay cut. So I feel that there needs to be industrial action around that. It’s time to fight now this government, on three things. I think we need a fair workload for teachers, because they’re working too long. We need fair funding for our schools. And we need to be fairly paid.

JAISAL NOOR: For more reporting from the United Kingdom, stay tuned to TheReallNews.com. From Leeds, this is Jaisal Noor.