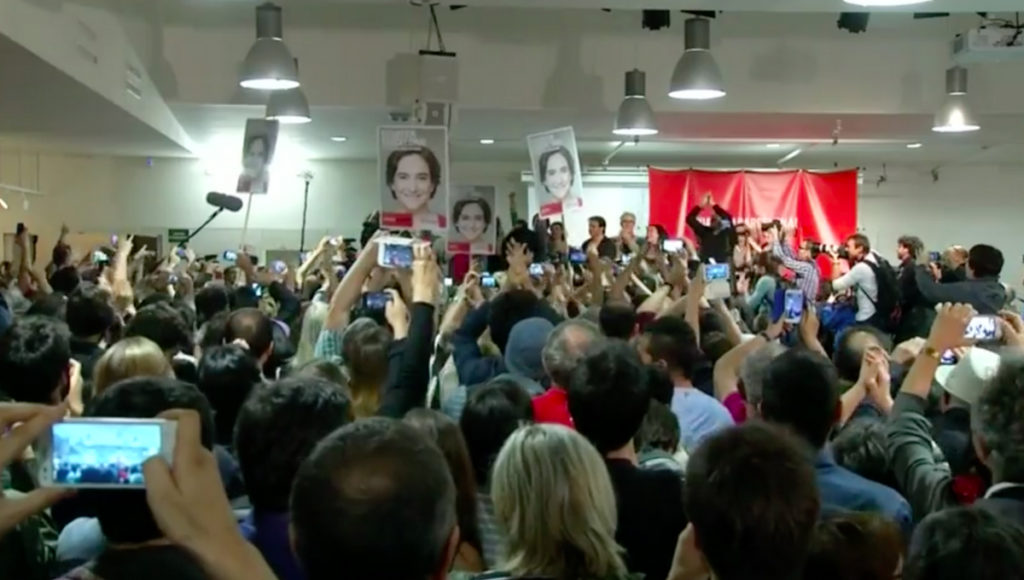 JAISAL NOOR: Far-right governments have taken power across Europe, spurring electoral wins and advancing an anti-immigrant, pro-austerity agenda. But that’s not the case in several cities and Spain like Barcelona, where three years ago the left scored a number of local victories centered on advancing economic and human rights on a municipal level. At the Fearless Cities North America Conference, we sat down with housing activist Gala Pin, councilperson and member of citizen platform Barcelona en Comu.

GALA PIN: We are mostly people coming from social movements, so that we were not before in the institution. We’re not in institutional politics. And I think most people after joining social movements for a long time and always finding there was a blockade with the political institutions, we decided to make a call and to run for elections, making a call saying, OK, we have different goals; making politics in another way, guaranteeing social rights, fighting against corruption. And everyone that wants to join us and share this goal is welcome. So we are kind of a confluence of different political parties, traditional left political parties that exist before; also Podemos, and independent people, that we were never before in institutional politics.

And we run in election so in order to win. And this happened without expecting it, because we didn’t have political, economic, or media power. And sinse then we are the government of the city of Barcelona. And something like that happened also in these other cities that I mentioned; also Cadiz and [inaudible], other cities of Spain.

JAISAL NOOR: And so you came into power promising to address the social issues; things around housing, and employment, and poverty. What has the result been since the last three years?

GALA PIN: Well one of the most difficult things for us to confront was how to deal with the expectations created with our victory. But I think three years later we can say maybe we haven’t finished with justice and capitalism from a municipal level; but there are some changes that can be touched, such like unemployment has decreased. We’re not working with companies that do not pay a least thousand euros per month, or do not contract people for more than six months. We are not also working with companies to tax our sources and paradises.

GALA PIN: Yeah. And about inequality, like the rate of inequality was increasing, and now is stabilized and decreasing. There’s still a lot of work to do in the main issue,which is housing. We have, we have multiplied four times the budget oriented to housing, and we are creating more than 4000 public houses right now. And we have like nine different public policies in order to reach affordable housing. But the main laws concerning grants and concerning speculation, they’re national laws. So we are making a lobby with the other cities of change in order to make the government change these laws that are, that propose al lot of evictions from our neighbourhood; visible and invisible evictions.

JAISAL NOOR: And the anti-eviction movement was a big part of the indignados movement; and the idea was to keep people in their homes, because if you lose your home, you have nowhere to go. What is the status? How many evictions are happening now in Barcelona, and if you’ve been able to help bring, slow that down.

GALA PIN: Before we were in the city council, the government of the city, the last government, they didn’t know how many evictions had taken there, in the city. So now we have a department that works against eviction. We try to negotiate with the owners in order to- or give public help for paying the rent, or finding an alternative, or negotiate with the neighbours so the increase of rent is not so high. So the global number in the city, in my district we have intervened in more than 800 evictions, with more or less, more than 70 percent were solved. And although we still have this big housing crisis. But that’s something that didn’t happen before. Before the city council was not involved in evictions, they said it’s something between [private], so they have nothing to do. And if you consider housing as a good and as a need you have to involve yourself in public administration.

So we are working on these housing and on these eviction issues. And I would say that here, for example, this collaboration is very important. All the social movements that have been working against eviction and for housing rights for years, it’s very important, the work that they do. Also, working with the families, and practicing [inaudible] when the eviction comes, and we were not able to stop it. So I would say that in this case we have, like, a good collaboration, where movements criticize us sometimes, but it’s like coming together for a common goal.

JAISAL NOOR: Barcelona has tried to put some regulations on tourism. Things like regulating AirBnB and other temporary rentals, because that’s forcing, it’s making the housing crisis worse, critics say. Can you talk about that?

GALA PIN: Well, concerning tourism, we have we tried to have public leadership on the tourism model that has not been there, this public leadership, since the ’90s. So the first thing that we made was a plan in order to regulate the new construction and the building of hotels and tourist- places where tourists can can stay, which meant that the city center, there’s no new hotel thatcan be built, because it’s like a place where you have some neighborhoods were there’s more people passing through than people living in.

And at the same time, we started with this strategy in order to confront AirBnB using the laws. No one had asked this big platform to apply the law. So at least we find every, maybe 600,000 euros, that’s a fine that’s still going on. For the first time we have achieved that AirBnB gives us the data from the people that are renting their flat without a license. You can have a license in order to rent your flat. But the most part that offers AirBnB is without a license. So they are willing now to collaborate after this fine of 600,000 euros. And actually there are other cities that are copying the model that we applied with AirBnB, because it’s a platform that didn’t want to negotiate, saying OK, we’re big, so you’re going to have to tell us what to do.

And I would say, with the private sector, the fact of limiting, putting a limit to hotel growth, make that, the local sector was angry and they were very aggressive, saying it will crash down the economy of the city. Which actually didn’t happen. And with AirBnB, which is very unpopular, it was- well, people were more happy about this, being very hard with AirBnb.

JAISAL NOOR: What was the position of Barcelona around the Catalan independence movement? Explain how you navigated that.

GALA PIN: Actually, we are a municipalist proposal.

JAISAL NOOR: So what does that mean? Talk about what that means, municipalists.

GALA PIN: So it means that we act just from the local level. And it’s true that Barcelona is the capital of Catalonia, but at the same time it’s not so important if Barcelona is independent on their government for financial independence. Not because it’s a national issue, but at the same time our position was based on basic human rights. So we have always defended the right to the [side], and saying, OK, we have to be able to make a referendum. But if you want to remain in Spain, if you want to be independent, or if you want a [fellow] state, what kind of territorial model do we have right now? Also about resources. But for example, we have to ask also how much, how many, how much money from the general state budget comes to the cities, which is just 15 percent. And we are leaving with the needs of daily life problems.

So we always have, we all have defend this right to decide in order to say, OK, whatever it is that we want to go, we have to let people decide their own future. And that was our main position on this Catalan issue.

JAISAL NOOR: And so that angered both sides.

GALA PIN: Yeah. That meant that they wanted us to say just black or white. I think the reality is much more complex than that. It’s good to have different positions. But we were also very critical with all the repression that the state was applying after the first of October. And repression, the police repression, also the intervention of the government, which meant losing sovereignty much more. Or at least at a level like in the ’70s.

JAISAL NOOR: And finally, why do you say that cities are the future?

GALA PIN: Well, we have most of the population of the world living in cities. This is the ones that are confronting these daily life problems, which are the ones that concern about life, actually. And if we want to make politics in that way, and we want to put the people in the center of the public policies- that what’s happened in cities is the thing that matters, and also is the place where conflict is, it’s evidence, so like the conflict of privilege and interest from companies and from common people. And at the same time, it’s the place where you can build up communities in order to confront this right-wing dynamic that I hear in the States, but also in Europe, and to confront racism through these local proximity policies that are practiced from city council, but also by the communities and people living in a city.

JAISAL NOOR: Thank you so much.