As President Alberto Fernandez and VP Cristina Fernandez take over in Argentina, expectations are high that the new government will reverse the neoliberal policies of the previous government and emphasize progressive social policies.

As President Alberto Fernandez and VP Cristina Fernandez take over in Argentina, expectations are high that the new government will reverse the neoliberal policies of the previous government and emphasize progressive social policies. 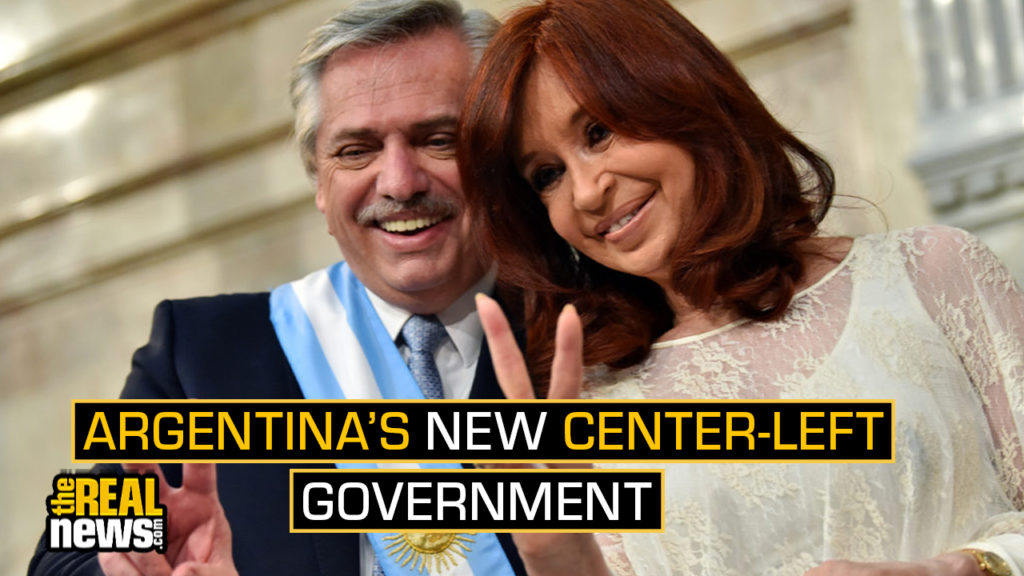 NICK MACWILLIAM: On Tuesday, 10th December, Argentina’s new government of President Alberto Fernández took office. His election brings the curtain down on four years of right-wing governance under Mauricio Macri, whose four years in office were notable for a resolutely pro-market neoliberal agenda, rising living costs and close relations with the United States.

SPEAKER: We’re happy democracy has returned to Argentina, as well as work and solidarity.

SPEAKER 3: Happy that Peronism has returned to Argentina.

NICK MACWILLIAM: Hundreds of thousands of people are taking to the streets of Buenos Aires to celebrate the new government’s inauguration, which sees former president Cristina Fernández de Kirchner return as vice-president.

SPEAKER 4: Domestic workers who clean people’s houses didn’t used to have any rights. Today, we have rights to vacations, to bonuses, to social support.

SPEAKER 5: We have lots of land and can produce lots of food. There can’t be so much poverty in our country.

SPEAKER 6: We resisted four years and we’re back. We’re back better and stronger.

NICK MACWILLIAM: At the left-wing Patria Institute, whose honorary president is Cristina Fernández, supporters of the new government have gathered to watch the inauguration.

MARIANA VAZQUEZ: The arrival in office of Alberto Fernández and Cristina Fernández de Kirchner is very relevant to the Latin American integration project based in autonomy, sovereignty and inclusion. Argentina has a very large responsibility to recover this regional integration project which respects democracy and autonomy and which doesn’t accept interventions, especially by the United States, and which looks to peacefully resolve regional conflicts.

NICK MACWILLIAM: Despite Argentina’s large debt, Alberto Fernández has pledged to continue the social investment of the Cristina Fernández governments and that of her predecessor and husband, the late Néstor Kirchner.

SPEAKER 7: It’s difficult because they’ve left a complicated legacy of debt, but we have faith in the Peronist government.

SPEAKER 8: After four really bad years of struggle, all of us hope to regain the rights they took away.

NICK MACWILLIAM: Under Macri, Argentina took out unprecedented IMF loans, the largest in IMF history, at 56 billion dollars. Amid crushing austerity, living conditions deteriorated significantly. Alberto Fernández has said he will renegotiate the IMF conditions and put an end to austerity as Cristina Fernández remains immensely popular, which is evident when her car passes through the crowds. There is also hope for human and social rights in the country.

NICK MACWILLIAM: After recent right-wing advances in Latin America, the Argentinian election demonstrates that public desire for socially-focused governments remains strong. Although there will no doubt be challenges ahead, today there is celebration on the country’s streets over what the future may hold for ordinary people.

This is Nick MacWilliam for the Real News in Buenos Aires.