In an unprecedented act, the Justice Department is seeking the personal internet information of 1.3 million visitors to www.disruptj20.org, an anti-Trump website that organized Inauguration Day protests

In an unprecedented act, the Justice Department is seeking the personal internet information of 1.3 million visitors to www.disruptj20.org, an anti-Trump website that organized Inauguration Day protests 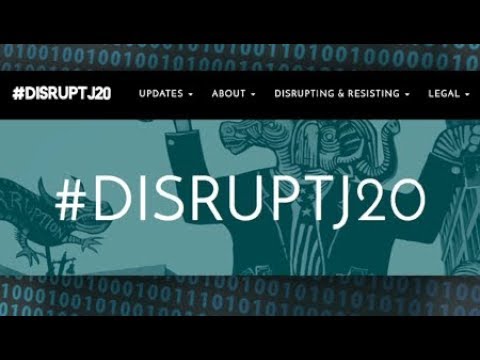 If you protested Donald Trump on Inauguration Day, or were even curious about doing so, the odds are high that the government now wants your personal internet information. Trump’s Justice Department has asked for the browsing data of all 1.3 million people who visited an anti-Trump website before his inauguration. The site, disruptj20.org, was used to coordinate civil disobedience actions the day Trump was sworn in. More than 200 protesters face charges for taking part.

Joining me is Alfredo Lopez, co-director of May First/People Link, a web service for the progressive community. Alfredo, welcome.

ALFREDO LOPEZ: Thank you. Thanks for having me.

AARON MATE: If you could tell us about this case. DreamHost, the server company, hosted the Disrupt J20 website, and now the government has asked DreamHost for the records of 1.3 million people who visited that site leading up to the Inauguration Day protests.

ALFREDO LOPEZ: Right. It starts in January, shortly after the inauguration. The Department of Justice sought and received and served a search warrant on DreamHost, for some basic information about this website. This website is a site that was used, one of the primary sites being used to organize the inauguration protests. And so, as we’ve since learned, at least some of us, those of us who were in New York knew a long time ago, but as the country has since learned, Donald Trump tends to take this stuff very personally, and people who protested his inauguration became the targets of this kind intense investigation.

It’s important to remember that DreamHost, as a provider, cooperates with the government routinely on the rendering of information on its servers. It is not in any way, shape, or form strange that it immediately gave up the owners of this website, the managers, the registration, addresses connecting with the website, et cetera, all of which stem from the original search warrant. However, when the government got this information, it then expanded the search warrant shortly after. It’s what’s called requests.

In other words, the way search warrants work on the internet is, they get a warrant for you through an affidavit that they present to the court about what the case is about. The affidavit isn’t public. The warrant is. And the warrant is expandable through a series of what they call requests. It’s a laughable term, but that’s what it is. The requests specify what you’ve got to do to comply with the warrant.

In this case, they made a series of additional requests. They asked for information from the databases on the website, which is, you know when you fill out those little forms and say, “Yeah, I want you to contact me in the future,” that goes onto a database. They would get that information, say, your address, or your email, et cetera. And then, they made a final request. They wanted the IP addresses of everyone who ever visited the site. That request is unprecedented in the history of the United States and the internet. It is an incredibly blanket request, and what it basically says is, anybody who visits the site, they will now have your information as part of a case and a criminal investigation.

That’s with the IP. Just so, people might not know what an IP address is. Just to contextualize, when you sign on to the internet to begin a browsing or email session, your provider, your people who put you online, assign you a series of numbers, a series of multi-digit numbers, which are called an IP address. That’s kind of a little badge that you carry around during your entire session. That’s the number by which you’re known on the internet during this session, and in tracing that number, they can determine every place you visited, what you did, and by getting in touch with your initial provider, they can get all kinds of information about you, including who you are.

So, there are 1.3 million IP addresses logged. That is an incredible amount of information, an unprecedented intrusion by the Department of Justice, and that’s where DreamHost has stopped. That’s where it held the line. They said, “We’ll give you everything else, but you cannot take those IP addresses.” And that’s what the legal issue is about, which is going to court tomorrow.

AARON MATE: Right, so there’s a hearing on Friday. Now, forgive me, Alfredo, if this question is naïve, but have IP addresses been used before by law enforcement in a court of law to build cases?

ALFREDO LOPEZ: Absolutely, and it’s a very effective piece of information. A lot of people think you can be anonymous, and you actually can. Using certain methods, you can have an anonymous internet session, but most people don’t. I, for example, do not, and I’m an internet professional. I go on the internet, I know that my IP address can be traced all over the place, and in the case of criminal activities, real genuine criminal activities, or some political cases, demonstration organizers, et cetera, they use the IP address to trace where people go.

But what we’ve never seen … You see, there’s a difference. It’s bad enough if they’re investigating me for organizing something, say, May 1st People Link, and they’re using my IP address for that. But when they take the IP address of everyone who visits our website as part of a criminal investigation, that’s the difference between an overreaching government and a police state, and that’s where we have to draw the line. That’s where DreamHost is drawing the line.

AARON MATE: Right. Certainly, there have been other cases of government requests for online information, but none, I imagine, have been this expansive, covering this many people.

ALFREDO LOPEZ: That’s right, or as blanket. I screamed and yelled in columns, comments, and speeches, about Barack Obama’s White House, and its intrusive … He was the master of intrusion, as far as the internet is concerned. They have all kinds of ways in which they violated the First and Fourth Amendment, and there have been many legal cases and struggles around that. Things have gotten worse from that point of view, but we’ve never seen them open up a funnel like this, and say everyone …

AARON MATE: Alfredo, so, finally, you have, as you mentioned, this court hearing tomorrow. Where do you see this case going?

ALFREDO LOPEZ: I’m not a lawyer, so it’s tough for me. I’ve never been able to guess legal stuff. My hunch is that there’s going to be argument on both sides. There’s going to be clarification of positions, there’s going to be presentations of motions, and probably, I doubt profoundly that we’re going to get a decision from the courts on this particular search warrant.

Keep in mind that the portion of the search warrant that’s being challenged is the blanket collection IP addresses. That particular part of the search warrant is a legally complicated issue. It hasn’t been dealt with legally before, so I imagine that the courts are not going to immediately make a decision on it. I doubt very much that we’ll get a decision, but we will get clarification of positions on both sides, and we’ll be able to get a handle on whether the Department of Justice really is serious about pursuing this, because if it is, then our movement has to pay a lot of attention to this particular issue.

AARON MATE: Right, and very quickly, given this case, if you are someone who’s visiting a anti-Trump, or anti-government, or dissident website, should you be concerned about the government one day seeking your private internet record?

ALFREDO LOPEZ: Oh, yeah, sure. You should always be concerned about the government. That should be something you carry around with you all the time. However, it’s really important that people not curtail their movement activities, or their web browsing, because they are afraid.

You see, here’s one of the things about this. If you get 1.3 million IP addresses, even though a lot of those are repeated, et cetera, you’re not going to analyze and identify all 1.3 million. So what the government is doing is not really an investigative measure. What it’s doing is intimidating people. It’s trying to provoke interviews like this, where people then will come out and say, “Oh my god, based on what this fella said, I shouldn’t be visiting those websites.”

It’s really important that not only do we visit them, but we increase visits to them, and just take on … The way to protect the right is to exercise it, and you have to exercise your right to visit these things, otherwise we close down the movement, and these … We all know what’s in White House and the government right now. You don’t want to leave a country in their hands, so there has to be a constant pressure on our part, and constant organization on our part.

AARON MATE: Alfredo Lopez, co-director of May First/People Link. Thanks very much.

Alfredo Lopez is co-director of May First/People Link.