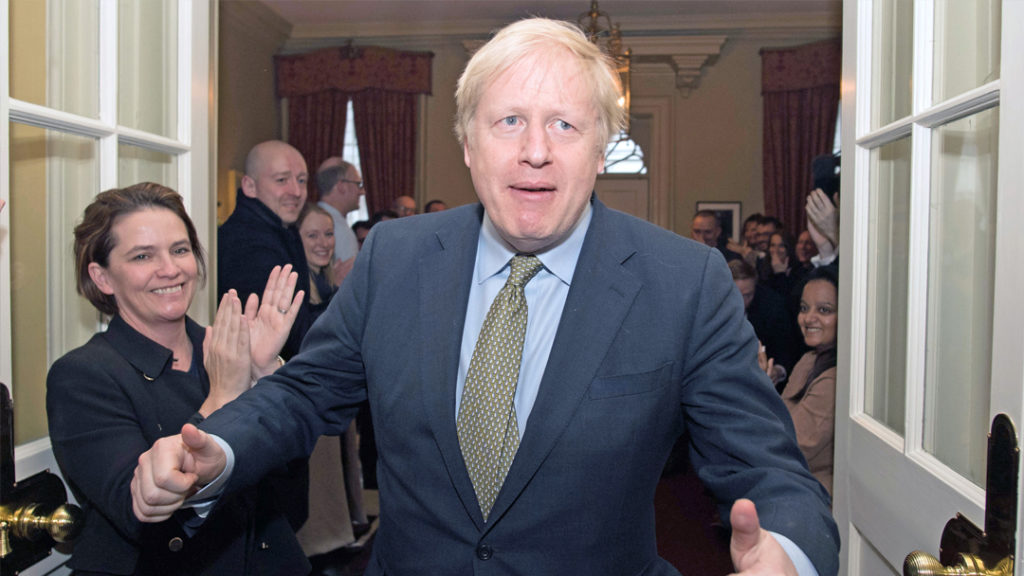 MARC STEINER: Welcome to The Real News Network. I’m Marc Steiner. Great to have you with us, as usual.

What just happened in Britain? Why did Labour tank? Was this, as some are saying, the Brexit election? Jeremy Corbyn thinks so. He said as much after he lost. And this is what Jeremy Corbyn had to say.

JEREMY CORBYN: I have pride in our manifesto that we’ve put forward; and all the policies we’ve put forward, which actually had huge public support on issues of universal credit, the green industrial revolution, and investment for the future. But this election was taken over ultimately by Brexit, and we as a party represent people who both voted remain and leave. My whole strategy was to reach out beyond the Brexit divide to try and bring people together.

MARC STEINER: Was Jeremy Corbyn right? Some say the blame falls partly on his shoulders, and a lack of clarity from Labour about Brexit. The Tory-won seats that have always been Labour seats, in part because disgruntled Labour voters not only voted for Conservatives, but for smaller parties as well, giving them–the Conservatives–their victory. It reminds a little bit of the French elections, where those who voted Communist after years of economic dislocation voted for the right-wing. But maybe it’s much more complex than that.

However you explain what happened, this was a decisive victory for the Conservatives. They now have an absolute majority in parliament. Not only will Brexit follow, but their vaunted national health care service will be under attack. Privatization could run rampant, making Thatcher look like a piker, and deals may be cut with Trump. How will all this fit into the political right-wing surge we see going across the globe? Is it part of it? The Scottish vote went left, but for the Scottish National Party, the SNP, and they push now, for a new referendum to declare their independence from Britain. How will that turn out? A lot at stake for the future.

So to begin our conversation, we have a conversation today with Tariq Ali; writer, filmmaker, editor at Review. He’s written numerous books on history and politics, seven novels, produced at least three films that I know about; wrote screenplays. His latest book is the Dilemmas of Lenin–which I have not read, but I will. Tariq, welcome. Good to have you with us.

TARIQ ALI: Very nice to be with you, Marc.

MARC STEINER: Was Jeremy Corbyn right? Was this the Brexit election? Is that why they lost? What happened here?

TARIQ ALI: Well, it was the Brexit election. Labour’s strategy of playing both sides failed. But more importantly, Marc, I think the point has to be made that once the referendum had taken place in 2015, it was obvious a majority of the country wanted to quit the European union for a variety of reasons. Some right-wing reasons, some did it to give the establishment taken the posterior because of the neoliberal agendas they were following. Then people expected that Brexit would be implemented. All the political parties, including Labour, said that they would implement the will of the people as expressed in this referendum. As the Conservatives managed to stitch a coalition together after the 2017 election, in which Corbyn did very well, adding a million more votes to Labour, and denying the Tories a majority in the interim, that gap between 2017 and 2019, Labour started behaving differently.

In my opinion, they should have let Theresa May or Boris Johnson get on with it and deliver Brexit. Then, six months later when there was an election, Labour could have fought on this program and won. Instead Labour united with the Lib Dems and the Remainer groups inside parliament and actually made a big play of having stopped the Conservatives from implementing some things that had been voted for. So the impression created in the minds of large numbers of people–not exclusively Leavers, Brexiters–was that an attempt was being made to sabotage the referendum by establishment politicians. Labour could never cut loose from that. Jeremy Corbyn, to his credit, was not in favor of this initially. But John McDonnell, other people within the Labour left, and of course large numbers of supporters of Blair and Brown in the parliamentary Labour party pushed this through; then followed it up by promising his second referendum.

That, I think, was the last straw for many, many working-class Labour voters in the North, who voted in some cases for Conservatives, but in many cases by voting for the Brexit Party led by Nigel Farage. These flit off votes to Nigel Farage denied Labour a majority in their traditional seats. You can see it in a number of seats. It’s quite shocking to see seats which are being Labour seats, in some cases since there was that universal franchise almost, now going to Conservatives. If you look at the map, it’s pretty horrific. I think it was definitely Brexit, and I think it was a monumental strategic blunder by Labour to promise the second referendum and not to stand aside once the Tories implemented what they wanted to implement. Then we could invite a clean fight.

Boris has won. And he’s won because this is what he promised to people: He said, “My own party has been dilly-dallying. The other parties have been attempting to sabotage the referendum results. I will deliver.” He attempted to deliver, and was blocked, and so he played that for all it was worth, kept the election exclusively on Brexit; and not all Labour’s forces, all men and women, could change that agenda. Jeremy’s absolutely right. A majority of people like many of the key elements in the Labour program, but that is not what the election turned out to be about.

MARC STEINER: A couple of things here. Let’s first take a look at the… You mentioned Boris Johnson. This is a very brief clip of… It may be the gloating clip. We’ll see.

BORIS JOHNSON: Today we’ll have an overwhelming mandate from this election to get Brexit done, and we will honor that mandate by January 31. In the next few weeks and months, we will be bringing forward proposals to transform this country with better infrastructure, better education, better technology. If you ask yourselves, “What is this government going to do? What is he going to do with his extraordinary majority?” I will tell you that is what we are going to do; we are going to unite and level up.

MARC STEINER: In the little bit of time we have left here, there’s couple of things that I want to raise. One of them is who we just watched and how this could actually really transform Britain and affect Europe; and its relationship with the United States, with Trump at the helm, because he could be at their home for quite some time. We’re talking about Boris Johnson. So this could really change Britain in ways that Thatcher only dreamed about. Am I wrong about this?

TARIQ ALI: I don’t think it would change it more than Thatcher did. That was a pretty decisive two terms of office in which they embarked on a new liberal program. I think Boris would probably prioritize, not by stealth, but more or less openly, the National Health Service and promise it will still be free at the point of production for anyone who belongs to it. But it would be more efficient if it was privatized. That’s where people who voted Labour unthinkingly to punish Corbyn, are going to feel the pain over the next few years.

I wouldn’t exclude, necessarily, a wave of strikes like we’re seeing in France today, if Boris attempts to move too rapidly, too fast, on privatizing the health service and carrying on. I mean, they’ve privatized most things Marc, so there’s not too much left to privatized. Which is why labor was going to take the railways back, bring the utilities back under public ownership because these privatizations, have in most cases, been a complete disaster. That has been stopped by Boris’s victory.

MARC STEINER: What then is the future for Labour, from your perspective?

MARC STEINER: Are you trying to say, Tariq, once we’re out of the way the revolution will begin?

TARIQ ALI: The future is going to be a Labour future in five, six years’ time as these young people grow up and others come, and they have to live under a yet another Tory government. The reaction will be probably be quite swift, but Britain might be different. Not so much in the horror stories which people have been thinking will come about, but Scotland I think–

MARC STEINER: That was my next question.

TARIQ ALI: …Is now in command; could go independent. Ireland could move towards unity. The Conservative party itself is split. The Liberals, who were the big white hope of liberal columnists and journalists, collapsed. Their leader lost her seat. I think one shouldn’t imagine that things will quieten down. They will possibly, till Brexit is done, which could take another year; and then all the politics will resume and we shall see.

MARC STEINER: You mentioned that the Scottish vote. It would be hard put to see another referendum, but this is still going to be a huge place of discord over the next several years.

TARIQ ALI: I think over the next few years, the center of opposition to the Conservative government will be Edinburgh, will be Glasgow, will be the Scottish parliament. They are the ones who will fight back. They’re the ones whose leaders will speak up. Of course, we hope that when Jeremy goes–and he shouldn’t do that quickly, but when he goes–his replacement will be someone who believes in quite a few of the things that were pledged in the Labour manifesto.

It would be a disaster for Labour were someone to suggest that they should go back to the Blair, Gordon, Brown days. Were they to do that, they would lose half their membership; which is at the moment just over half a million. Lots of people, young people, would leave the party. It’s all up for grabs again, and we will see what happens over the next six months.

MARC STEINER: Yeah. As you’re pointing out, it will be inside the Labour party, the neoliberals versus the left, and also generational battles. Tariq Ali, I really do appreciate you taking the time with us here in your evening in London at home. We look forward to talking to you again soon and seeing how this unfolds, and how it fits into what’s facing the world at the moment.

So thank you so much for your work and for being with us today. Check out his new book, The Dilemmas of Lenin. I’m going to do that. I’m Marc Steiner here for The Real News Network. Thanks for joining us. Let us know what you think. Take care.