Algerian youth are fed up with Algeria's post-independence old guard and after succeeding with Bouteflika's resignation, they continue to push for a purging of the government's old guard before new elections are held.

Algerian youth are fed up with Algeria's post-independence old guard and after succeeding with Bouteflika's resignation, they continue to push for a purging of the government's old guard before new elections are held. 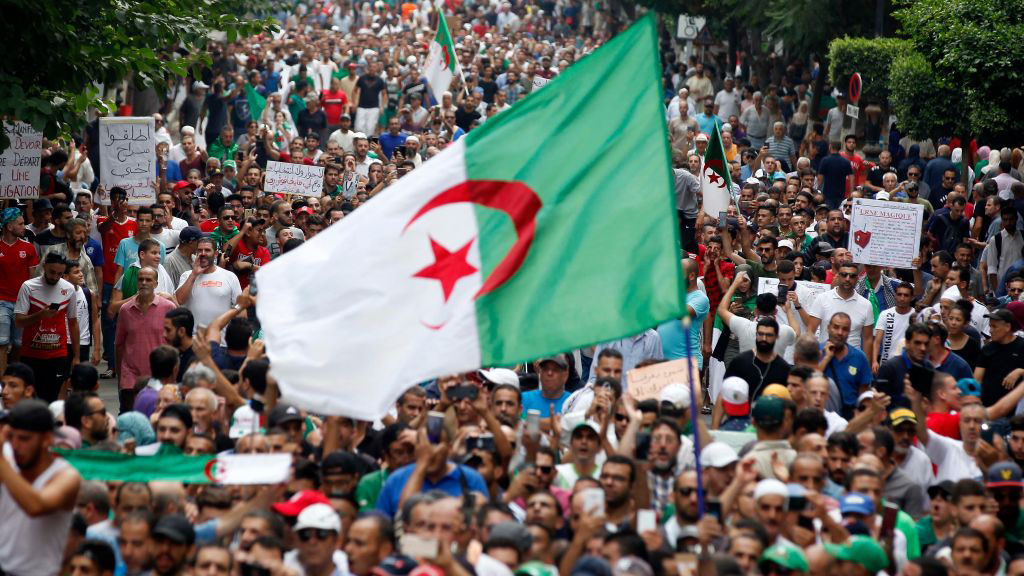 After 25 consecutive weeks of protests in the streets of Algiers and elsewhere in Algeria, a hundred political prisoners who call themselves prisoners of conscience and who belong to the protest movement have declared a hunger strike. Here are some of the voices of the demonstrators that took place last week in the capital of Algiers.

SPEAKER: I won’t vote. No elections with this gang. Bedoui, Bensalah, and Gaid Salah have to leave. And after that, we will do the elections. The elections must be from the people and to the people.

SPEAKER 3: There won’t be elections with the gang, my dear brother. People are the ones who choose their destiny, not the army. Government is a murderer.

GREG WILPERT: Interim President Abdelkader Bensalah was supposed to step down in July. He then proceeded to schedule elections, though, for December. The protestors are saying that the elections in December will be rigged, and the military and former President Bouteflika’s old supporters must be removed from government before–not after–the December elections. Meanwhile, an important cleric, Sheikh Lakhdar Zaoui, issued a fatwa calling on people to participate in the December election to prevent the country from descending into anarchy.

Joining me now to discuss the latest developments in Algeria is Angela Joya. She teaches at the Department of International Studies at the University of Oregon. Her most recent book is The Roots of Revolt: A Political Economy of Egypt from Nasser to Mubarak, forthcoming from Cambridge University Press. Thanks for joining us again, Angela.

GREG WILPERT: So as we saw from the clip, the main issue is that the protestors fear that the December election would not be free and fair. What do you think? Is this a valid concern? And if so, how would they propose to organize an election if the whole old guard would actually step down?

ANGELA JOYA: So while the election is definitely a huge issue, if we backtrack a bit to February 2019 when the protest movement initially began–asking Abdelaziz Bouteflika to step down from power because they suspected he would run again for office as president–the roots of the grievances go much deeper than just asking for the election. So the media has definitely targeted that particular demand, that the protesters do not want the military to have such a deep influence in the elections because it would be rigged. But I think it’s much bigger.

From what I’ve been following on Algeria in some of my current research that’s on Algeria and North Africa in general, the grievances go deeper in the sense that the whole military and the business elite in Algeria is perceived as constituting a power grab, or a powerful group that’s basically dominated the state. And since independence in 1962, they’re seen as a minority group who have usurped the resources of the country. And if you look at Algeria’s economy, they have been predominantly dependent on hydrocarbons, which also brings an element of uncertainty because of the prices of oil in the global markets. And so, Algerians are expressing frustration at broader socioeconomic concerns, but political concerns are the tip of that often bigger concern at the level of society.

GREG WILPERT: Now, after 25 weeks of protest, these protests continue to go up fairly strong it seems. Do you think that the protesters are being inspired by events in Tunisia or Sudan, where they were actually successful in basically overthrowing the government? And tell us a little bit more about what is driving them. That is, do you think that they are a force that this government must reckon with?

ANGELA JOYA: So just a bit of background. Whether they’re inspired by regional movements and protests; definitely. I am currently doing more research on social movements in North Africa, in Tunisia, Morocco, and Algeria, and there’s a lot of learning from each other. And so there is sharing of strategies of how to resist, how to demand radical social change. And there’s a broader awareness in the region, especially in North Africa, that the policies that these governments have pursued–whether under the state control or under the free market model–these policies have not represented the will of the people. So they see them as illegitimate now, at this point. And they are demanding a radical change in that sense across the region, especially in Tunisia and in Algeria.

Now, in terms of grievances of these protesters. When we step back and look at it, Algeria has one of the youngest populations; 70% of its population under the age of 30. And unemployment rate among the youth is the highest. And so, although it’s just over 15% lower than Tunisia, it’s still quite vast. Algerians do not see diversification of the economy in a sustainable fashion. But they’re also seeing this ongoing what they call the “pouvoir,” they refer to. But also, they are referring increasingly to the ruling elite as a new colonial elite. So they see them as not really listening to the people. And that’s the main grievance, which is the heart of democracy, where they’re expecting and demanding that the voices of the people be heard, and those voices be included in the policy and economic planning of the country.

And increasingly, they’re actually asking to move away from resource extraction. And so, if you observe protests across Algeria in smaller towns, it’s become increasingly clear that the concerns are around issues of climate change, issues of resource depletion–especially in the cases of towns, like mining in the South of Algeria. But overall, these grievances all intersect with issues of unemployment, with inflation, and an overall environment of lack of hope and change which they associate with this ongoing power hold by the military and their associated business elites.

GREG WILPERT: Now, what do you make of the fatwa that was issued by Sheikh Lakhdar Zaoui? First, we probably need to explain what is a fatwa, for those who aren’t familiar with it. But Zaoui is not considered to be a pro-government cleric. But if people will follow his ruling, do you think that this could bring the protest to an end by actually participating in the December election?

ANGELA JOYA: So just a bit of context again about these fatwas that the state often uses. It happened in the case of Egypt when Mubarak was in power. They would get basically a prominent clerk to come out and support, give a fatwa basically, declare that this is the obligation of a Muslim population to follow this. And so, he gave the example of Prophet Mohammad and how I guess after he passed away, they didn’t want to bury him until they found a replacement for him. Now, the significance of this for Algeria is that the Algerian military, I think in this current conjuncture and with the ongoing protests happening on a weekly basis, they’re fearing that this is going to lead to a political crisis that will get out of their hands.

And so, this is almost like… For a relatively secular group, the FLN–the group in Algeria that secured independence of the country–to resort to actually bring in an Islamic cleric to support them and their call for elections and getting legitimacy for this presidential election is definitely a sign of increased fear by the military of a looming political crisis that might be getting out of their hand. And I think the fear is that they want to avert such a thing, especially with this recent 1990s decade-long civil war that Algeria experienced. So the choice I guess in front of them is either they have to really give into the demands of the protesters and implement a radical democracy. Bring in the voices of the people, bring in these groups, sit them at the table, and think about a different way out of this crisis–not just the political crisis, but the economic and social crisis–or force a presidential election that will give them the appearance of legitimacy.

GREG WILPERT: Okay. Well, we’re going to leave it there for now. I’m speaking to Angela Joya, Professor of International Studies at the University of Oregon. Thanks again, Angela, for having joined us today.

ANGELA JOYA: Thanks for having me, Greg.