Sudan was suspended from the African Union following a military attack on  peaceful demonstrators that killed over 100. But Saudi Arabia and UAE continue to support Sudan's military regime. We discuss the situation with Prof. Khalid Ahmed

Sudan was suspended from the African Union following a military attack on  peaceful demonstrators that killed over 100. But Saudi Arabia and UAE continue to support Sudan's military regime. We discuss the situation with Prof. Khalid Ahmed 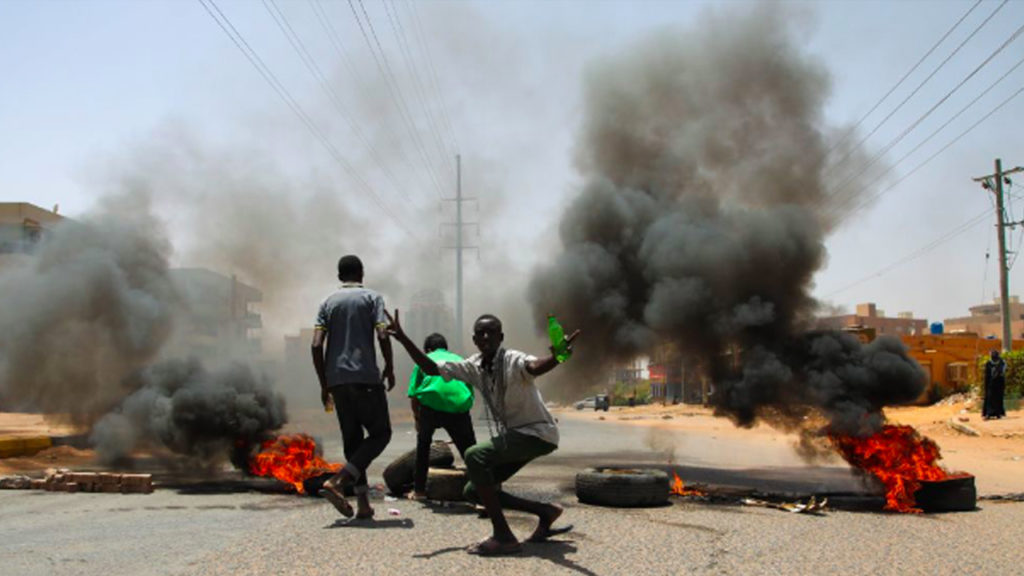 Developments in Sudan took an ugly turn this week. After protesters were able to topple the government of President Omar al-Bashir last April, the military took over and declared a state of emergency. Protesters continue to demand a civilian government and a democratic process, and the military entered into negotiations with the protesters about a gradual transfer of power to civilian rule. On Monday, however, the military broke all agreements. The soldiers charged into a peaceful sit-in, and over 100 people were killed either on the spot or later from their injuries, and over 500 were injured. Then on Wednesday, the military offered to restart negotiations.

In response to the brutal crackdown, the African Union’s Peace and Security Council held an emergency meeting on Thursday, and South Africa’s ambassador to the U.N. Jerry Matthews Matjila announced the AU’s decision to suspend Sudan from the organization until a civilian government is formed. Here’s what he had to say.

JERRY MATTHEWS MATJILA We strongly condemn and lament the tragic and unjustified loss of life. And remind the transitional authority in Sudan of its obligation to protect civilians and respect their rights. We insist on the need for an investigation that was created by the events that took place on the 3rd of June in Sudan, with a view of bringing those responsible for the killings of innocent Sudanese and its people to justice, as requested by the Peace and Security Council of the African Union.

GREG WILPERT Joining me now to analyze the developing situation in Sudan is Professor Khalid Ahmed. He teaches political science at the African Studies Department in the University of Toronto, and also worked with the United Nations in Sudan in 2007. Thanks for joining us again, Professor Ahmed.

KALID AHMED Thank you for having me.

GREG WILPERT The military first announced that it canceled all the agreements with the protesters, and now they’re offering to restart negotiations again. What’s going on with these negotiations, and how likely are they to succeed at this point now after this massacre that took place earlier this week?

KALID AHMED The negotiations are not taking place at the moment. What is taking place, what is happening at the moment, actually, the most recent news, is that this morning the Prime Minister of Ethiopia, Abiy Ahmed, arrived in Khartoum, and he is beginning to try to bring the different opinions closer to each other. But the Declaration of Freedom and Change forces, that’s the major coalition of opposition that is negotiating on behalf of the Sudanese people with the, with the military council, has said clearly that after the massacre of June 3 they will not negotiate with the military council. What they would do is that they will get into an engagement with them onto how to transfer power. And that’s the only thing that they’re going to talk about. Because what they’re asking for now is that the situation, the government, has to be transferred into civilian hands, and those who are responsible for the massacres have to be held accountable for their actions.

So it’s stalled, the negotiations, at the moment. But hopefully Abiy Ahmed can bring some sort of compromise here and there, and save the bloodshed that is taking place.

GREG WILPERT Now, Sudan’s military council is receiving support from Saudi Arabia and the UAE. Saudi Arabia has allegedly given the green light, or gave the green light, to attack the protesters with deadly violence. At least that was reported by Al Jazeera, for example. Do you think that this is true? And if so, what is the Saudi and UAE involvement in Sudan? What are they trying to achieve there?

KALID AHMED That’s a very good question. And most people in general, when they think about issues in the African continent, they tend to think about it as an internal issue only. But it’s not really–not all the problems in Africa are internal. There is an external element to almost all the problems that are taking place in Africa, and in Sudan in particular, like such as what is happening right now by Saudia Arabia and UAE. What is the reason, the rationale that anyone can–the only rationale that anyone can think of at the moment is the fact that Sudan has around 7,000 to 8,000 to 9,000 soldiers fighting in the Saudi war in Yemen against the Houthis. So it’s in the interests of Saudi Arabia and Yemen to make sure that the government that is coming in to take charge of the Sudan maintains the soldiers in Yemen.

And they know that the Declaration of Freedom and Change forces, those opposition members who are speaking on behalf of the people, have declared before that once they take power, the first thing that they’re going to do is they’re going to bring our soldiers back from Yemen to Sudan, because this is not our war. Now, knowing this, [inaudible] and the United Arab Emirates decided to support this military council. What many people don’t know is that the president of the Military Council, Burhan, and his vice president, nicknamed Hemeti, Mr. Dagalo, they are the ones who are responsible for the, for sending the troops to Yemen.

So Hemeti has his rapid support forces, and the Sudanese forces in Yemen are composed mainly of his militia, and they are paid $450 per soldier. And many of them are child soldiers, actually. And the leader, the head of the Military Council, General Burhan, is the the army’s appointed communication officer between the Sudanese army and the Saudi and the UAE coalition.

So they both know each other very well, the president under Vice President of the Sudanese council. They work together in Yemen and sending troops into Yemen. And they have met high level officials in Saudi Arabia and United Emirate in their support of the war there and the continuous support of the war there. So it’s clear that Saudi Arabia and UAE wants to maintain this relationship that they have with these two army officers, and make sure that their own soldiers don’t get killed. What is also well known is that Sudanese soldiers are the ones on the front lines. They are the ones who are taking the bullets. They are the ones who are the ground troops, so to speak. So that is a very legitimate reason–or not legitimate, actually. That’s a very clear reason as to why Saudi Arabia and the United Emirates are involved in the Sudanese conflict at the moment.

GREG WILPERT Now, I want to turn to the African Union. Sudan has been a member of the African Union since 1963, but it was not suspended during the genocide in Darfur when up to half a million people were killed and millions displaced, nor during Omar al-Bashir’s dictatorship. Why did the AU decide to suspend its membership now?

KALID AHMED That’s a very good question. I think they have learned from their mistakes during the Darfur massacre and genocide. They have learned, the African Union have decided to take action this time instead of doing nothing, as they did before. So this time they’ve decided that no, since we have a civilian group that is speaking on behalf of the people, we need to give them the power to decide the future of the Sudan, not on other military officers who can and will exacerbate the many conflicts that take place in Sudan. So I think this is a preemptive strike by the African Union to prevent further escalation of violence and civil war in Sudan.

GREG WILPERT Now, last time we had you on, shortly after President Omar al-Bashir’s overthrow last April, we discussed the possibility that Bashir was actually the one who had orchestrated the coup against himself in order to avoid extradition to the International Criminal Court in The Hague. Now, almost two months later, do you think this still looks like what originally happened?

KALID AHMED Yes, it’s definitely still–the hands and the doing of the NCP, National Congress Party, that Bashir was part of, is the one who was orchestrating all of this. And I’ll explain to you why. For example, Burhan, the president of the Military Council, the current traditional military council, and Hemeti, they are close, they are known to be close allies to al-Bashir. And they themselves could be prosecuted by the Hague for their atrocities committed in Darfur, because both of them worked together prior to going–prior to them working together in Yemen, they’ve worked together during the war in Darfur. So they were solely responsible for the atrocities that took place there. And everyone knows the Janjaweed–these are the forces that Sudanese, of Arab tribes, the Sudanese government have put together an arm to wreck havoc on all the Darfurians at the time. But between 2003 and 2014, these people, President Burhan and Vice President Hameti, where the leaders of these Janjaweed. So they themselves would not want to give power to the civilians to protect themselves, and to protect Bashir also.

So it’s a gang of political corrupt leaders who contributed to atrocities over atrocities in Sudan in the past 30 years. And they know that once everything is going to be transferred to the civilian hands, civilian government, they’re definitely going to be prosecuted for it. So therefore the NCP is making sure that nothing of that, of that sort happens, and is trying to really make sure that this government, with the support of the Saudi Arabians and the United Arab Emirates, continues to govern Sudan, its military forces. They claim that they’re not going to. They claim that they’re going to have free elections in nine months. But it’s not going to be free. It’s going to be designed and staged to bring them to power again.

GREG WILPERT Well, it certainly sounds like a very intractable situation, but we’re going to have to leave it there for now. I was speaking to Professor Khalid Ahmed, professor of political science at the African Studies Department in the University of Toronto. Thanks again, Professor Ahmed, for having joined us today.