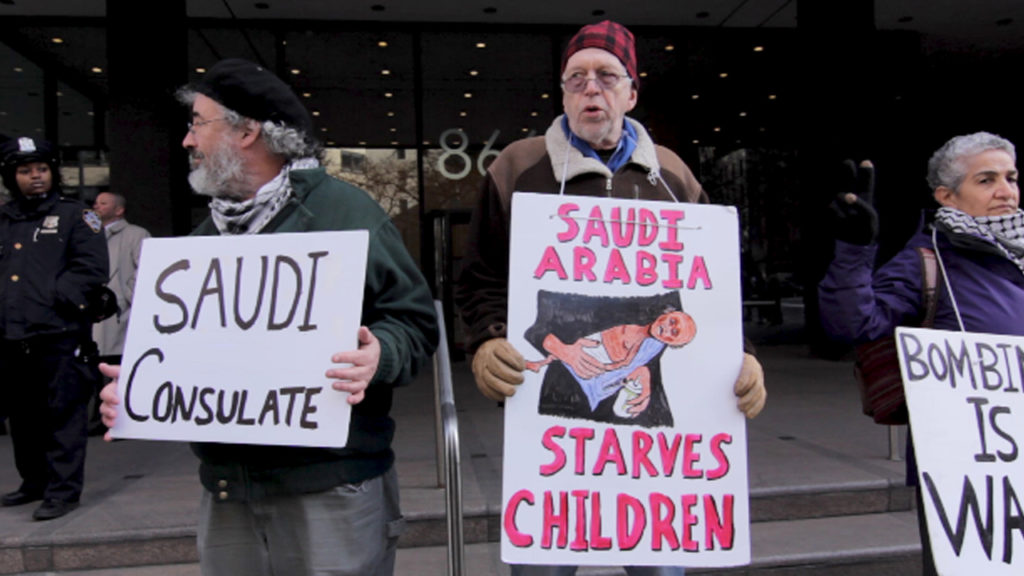 BRIAN TERRELL: Well, this is the sixth day of a fast, a two week fast about the situation in Yemen, and it is a small gesture of solidarity. We’re very privileged to have the choice to fast here, while many, many millions of people now are in shortage of food and clean water. But we’re not just fasting, we are acting and putting our bodies on the line.

Yesterday, I was one of 11 people who were arrested for blocking the gates at the U.S. Mission to the United Nations on First Avenue. And there was somebody from the office who was trying to push his way through to get out, and he said, “I’m missing my lunch.” And I apologized, but I said, “Look, our blockade here is very small, it’s very benevolent, nobody’s getting killed. The police will have us out of here in a few minutes and you will get your lunch, but there are millions of people in Yemen who are not going to eat today.” And I hope our small blockade in response to a huge one, our responses are not commensurate with the horrors that are going on, but we have to do something, and this is what we thought of doing.

KATHY KELLY: Voices for Creative Nonviolence, a group that I’m a part of, has worked a lot with people here in New York trying to raise awareness and concern about the situation in Yemen, a situation which is gruesome and hideous. And we felt that there’s a big responsibility on the part of people in the United States to help people in the United States better understand our complicity, and certainly also that warring parties whose Missions to the UN represent their countries. And so, during this time when there’s a lot of feasting over the holidays – and that’s good, people need that – that we see the tension between feasting and famine. And as we try to ourselves find ways to bear responsibility, we thought well what if we declare a fast. And so, it’s a very modest offering, but we declared a two week fast.

There are some countries that are complicit, but they get to be in the shadows in a sense. And so, we want to recognize that there are so many opportunities for every country represented in the United Nations to speak up and say, “We denounce this war and we recognize the 87,500 children already having been killed by war through starvation, through disease, but exacerbated and caused and furthered by war,” that the proper response to that is to insist that every negotiation, every dialogue must be focused and centered on how to reverse that horrible, horrible loss of life and how to express care for children.

JOAN PLEUNE: I’m involved in a protest against what’s happening, what the Saudi and U.S. governments are doing in the country of Yemen, the extermination, the genocide of the people of Yemen. I belong to a group called the Granny Peace Brigade. They’ve been active in New York City since 2005 when they were arrested for blocking the recruiting station in Times Square. People are beginning to know where Yemen is and it’s in the news a little bit, and maybe even our government, our congressmen seem to know now that the attack on Yemen is not a good thing. I actually don’t trust out legislators much, but if they do that, you know, vote on end this war, end all war.

CAROLINE: I’m standing now in front of the Saudi mission to the UN. Earlier today, we were in front of the French and British Mission to the UN and before that, UAE Mission to the UN, visiting these different places, as well as the U.S. mission, because all these countries, including the U.S., is complicit in the war crimes and starvation of the Yemeni. Just a week ago I came back from a trip to Afghanistan, and I always find when I’m there with the people and see their suffering that my heart is wide open.

And so, when I learned about this fast and the actions this week in solidarity with the people of Yemen, and I learned that there was going to be a direct action yesterday and that some people would be risking arrest in front of the U.S. Mission to the UN, I decided that for me to be arrested and to have five hours in a jail cell here was small compared to the suffering of the Yemeni people.

SPEAKER: Well, because of my experience as a veteran, because of keeping track of things, that we’re doing things for the wrong reasons. We’re not protecting the world, we’re trying to make our empire stronger. Our main export is military equipment, guns and arms. So it became easy to be against the war and for peace and for cutting the military budget, having some money left for the people at home. Veterans have that natural … We were there, so we can speak. I remember when I was on the vigil line when the war started and so forth, and people would say get a job, and we were veterans.

KATHY KELLY: On Wednesday, January 2, which was day five of our fast, we went to the U.S. Mission to the UN. And really before we got there, there were many more police people than we would have expected, and the paddy wagons and the plastic cuffs. And so, we were sure that we would be arrested. It’s not considered orderly to hold up signs that denounce war in Yemen. And so, we were arrested on charges of disorderly conduct for standing silently and holding up signs. But we did make it impossible for people to enter or exit from the building. And our sense is that inside that building, there is planning and cooperation, a way of condoning, in a sense, the bombings that have shredded children apart, the destruction of fisheries, of food production, of transportation, of hospitals, of schools, of mosques.

I mean, there have been so many actions that we think could well be investigated as war crimes committed. So we do belong there, to say look, inside that building, very dangerous things are happening. Suppose there was trafficking of narcotics or human trafficking going on in there. You’d want it investigated. Well, this is actually one of the most gruesome and hideous tragedies of our time being perpetrated through the support, and often the participation, of the United States government.