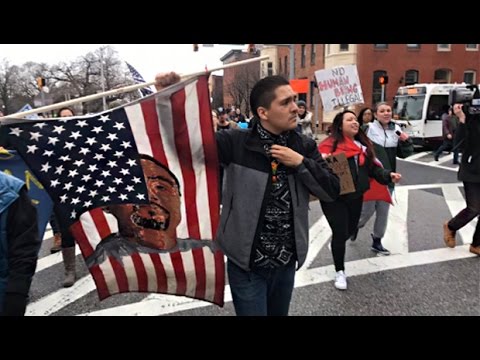 First Trump’s Muslim ban, now his directive targeting sanctuary cities. A federal judge has blocked another key Trump immigration initiative. This time he’s promised to withhold billions of dollars of funding from jurisdictions that refuse to comply with federal immigration authorities. Trump tweeted, quote, “First the night circuit court rules against the ban, and now it hits again on sanctuary cities — both ridiculous rulings. See you in the Supreme Court!”

The media falsely describes so-called sanctuary cities as shielding undocumented immigrants from the law. Instead, they deprioritise enforcing federal immigration authorities. Well, now joining us to take a closer look at this and the Trump administration’s enforcement policies is Aviva Chomsky.

Aviva recently wrote an article for TomDispatch in which she argues that while Trump has ratcheted up anti-immigrant rhetoric, past administrations, including Democrats, laid the groundwork for his current policies. Chomsky is a professor of history and coordinator of the Latin American Studies program at Salem State University.

Thanks so much for joining us.

AVIVA CHOMSKY: Thanks for having me on.

JAISAL NOOR: Let’s get your response to this judge’s ruling, because Trump and Jeff Sessions and his administration have argued that these sanctuary cities, and you hear it in the right wing media and all over the media, really, that sanctuary cities, they protect… they call them illegal immigrants that violate the law, that commit rape and murder, and this is wrong, that they’re shielding immigrants.

How do you respond to that?

JAISAL NOOR: And around the issue of ICE detainers, judges have actually ruled that holding… that for local authorities to hold people without a warrant is essentially unconstitutional and they’ve ruled against that. So some of these policies were adopted in response to federal rulings. Can you talk about that, as well?

Because what an ICE detainer is is that somebody who under criminal statutes is ready to be released either because they have served a sentence or because there’s no grounds for holding them, because they’re released on bail, whatever, ICE can ask local jurisdictions to hold onto those people after there’s no reason under law to hold them, and without a warrant they can’t be held just because ICE says so. So asking local jurisdictions to do this most likely is in the end going to be deemed illegal.

JAISAL NOOR: Now, in your article in TomDispatch, you write about how while Trump has certainly not held anything back on his rhetoric, you know, anti-immigrant rhetoric, in his campaign and during the first hundred days of his presidency and the media certainly bought into that, and there’s certainly a sense of fear in immigrant communities.

That being said, the level of deportations and raids thus far under Trump do not really compare to what we witnessed under the Obama administration. Can you talk about that? Because a lot of people –- and we say it all the time on The Real News –- but a lot of people still have trouble wrapping their head around that.

AVIVA CHOMSKY: Yeah. I mean, the whole legal apparatus that the Trump administration is using is a legal apparatus that really began to be greatly strengthened and enforced under President Clinton. That is, the idea of a border wall, the idea of criminalizing immigration — these are things that began under President Clinton and were increased under President Obama. That is, the criminalization of immigrants is what earned President Obama his moniker of Deporter in Chief, to raising the level of deportations above what any previous administration had done.

President Trump’s rhetoric, yes, is much, much more overtly anti-immigrant. But even in his anti-immigrant rhetoric he’s really building off ideas that have their roots in the Clinton and Obama administration and especially these ideas about immigrants are criminals.

And that’s one of the most disturbing things about Obama’s legacy, that even in his humanitarian efforts, for example DACA – Deferred Action for Childhood Arrivals – he very clearly distinguishes and his priorities stating that some immigrants, undocumented immigrants, should not be priorities for deportation, he uses this language of felons… families, not felons, suggesting that there are large numbers of immigrants who are felons, and that felons are criminals who should be prosecuted and punished.

And many of the deportations that have hit the front pages under President Trump are very similar to deportations of people with long roots in the United States, of people with families in the United States, of young people with DACA, that happened… detentions and deportations that were happening in very similar ways under President Obama. It’s just that the liberal media, liberal politicians, the Democratic Party, just looked in the other direction when it was Obama doing it, and now that it’s Trump doing it, they’re all over it.

Now, I think it’s a good thing that we be all over these kinds of unfair treatment of people and punitive deportations and detentions. However, we shouldn’t fool ourselves that this is just something that Trump is doing.

JAISAL NOOR: Now, May Day is around the corner and it’s a day that is being marked by immigrant rights advocates to protest the bans and the raids and the deportations under Trump. But if you talk to immigrant rights advocates, they’re happy that there’s been this increased awareness, and in Baltimore, there’s been huge marches across the city. But if you ask them, how are the communities responding? They say, “Well, we’ve been organized. We’ve already been dealing with this under the Obama administration.”

Can you talk about whether this should be a time when concerned citizens and advocates demand just change of Trump policies, or demand those same changes from the Democrats, as well, and call on them to change the whole structure of ICE enforcement? I know you’ve been raising the alarm about actual Obama administration policies like DACA actually being used as a list… a database that Trump can now use to round up immigrants. Can you talk about that?

AVIVA CHOMSKY: It doesn’t look like Trump is going to be using DACA as a database. Although he did initially say that he was going to end DACA, he hasn’t taken any steps in that direction, and he’s also made some statements indicating that he is going to continue to honor the commitments of DACA for recipients.

Now, Trump says a lot of things and we don’t really know what Trump is going to do, so I hesitate to predict. But right now, that doesn’t seem to be a major concern.

You know, the fact that many people outside of the immigrant community are now waking up and paying attention is a good thing. And I think that immigrant rights organizations, even though you’re absolutely right –- like, they’re saying, well, we’ve been talking about this all along, it’s just that nobody’s wanted to pay attention — but that they are heartened that people are now paying attention.

But I also think it’s really important that both immigrant rights organizations and outsiders who are being mobilized for the first time look at the roots and not just the surface of… like, not just Trump’s rhetoric, like, yes, they want to protest Trump’s rhetoric, but we also want to protest some very deeply embedded policies that clearly predate Trump. And, you know, if liberal Democrats are saying, “oh, we oppose Trump’s policies”, that’s good, but we need to hold them to it — even when there are Democrats in power, they have to oppose those policies.

JAISAL NOOR: Okay. Aviva Chomsky thanks so much for joining us.

JAISAL NOOR: And we’ll certainly keep following this story. And for all of our coverage on immigrant policies in the United States, go to therealnews.com. Thank you so much for watching.

Aviva Chomsky is a Professor of History and coordinator of Latin American Studies at the Salem State University and author of many books the latest ‘Undocumented: How Immigration Became Illegal’.