SAN DIEGO — San Diego has become one of the largest cities nationwide to adopt a Community Choice Energy program, breaking the monopoly of San Diego Gas & Electric, a subsidiary of Sempra Energy.

The program, sometimes called Community Choice Aggregation, received a 7-2 vote by the City Council at its September 17 meeting, with two conservative members voting in opposition. Proponents of the program say it will help the city achieve a goal of having 100 percent renewable energy on the grid by 2035. But it leaves nuclear energy on the table as an option, which proved a sticking point during negotiations over the legislation, and some say it doesn’t necessarily sputter the use of fossil fuels either.

The programs are seen by proponents as a way for local governments and the people they represent to have energy choices beyond what is offered by monopoly electricity companies. That often means purchasing more renewable energy, with the goal of cutting climate change-causing greenhouse gas emissions.

Policymakers have discussed San Diego’s version in a similar light. One of them is Republican Mayor Kevin Faulconer, who called this the first step toward a “green revolution” in remarks given on the City Council floor before the bill passed.

“It helps us make good on our collective pledge for 100 percent renewable energy use citywide,” said Faulconer, who some have hailed as epitomizing the type of Republican who could make the party viable again in California. “I know that all of us agree that we must leave behind a cleaner and greener world than the one we inherited. All of us agree that we should leave behind the kind of world that we want for our children and our grandchildren.”

Barbara Bry, a Democrat running for Mayor for the 2020 cycle in a race which has yet to attract a Republican candidate with Faulconer termed out, voted in favor of the community choice energy. Her opponent in the race and the frontrunner, Assemblyman Todd Gloria, has also endorsed the plan. City Council President Georgette Gomez, who is running for the soon-to-be-open 53rd Congressional District seat as a progressive Democrat, also voted in the affirmative.

“Today’s action really is a serious thing that we’re doing here as a Council and as a governmental body,” said Gomez before the vote. “Specifically, we’re addressing the climate emergency that is impacting the very thing that provides us life. So, I think by doing today’s action it’s very significant in ensuring that we’re meeting our Climate Action Plan, that we’re minimizing as much as we can the impact to our climate. I know we have a long way to go and there is a lot of things we could and should be doing, but today by doing this it’s pretty significant.”

Residents of member cities will now be enrolled in the Community Choice Energy plan by default, though they can opt out and keep their SDG&E plans if they would like. Not everyone walked away pleased with this arrangement. Republican City Council member Scott Sherman raised concerns,calling it a switch from a city-run electric utility system to a shareholder-owned monopoly.

“I have a real problem with saying at the flip of a switch, we’re going from a government-regulated monopoly to a government-run monopoly because that’s what’s going to happen with this,” said Sherman, a sentiment others who study community choice agreements agree with. “We already have an example of a utility run by the government as it is right now. Anybody seen your water bill lately or seen all the problems we’ve had in our Water Department with how we run it?”

In response, City of San Diego Chief Sustainability Officer Cody Hooven said she believes that the city’s plan will cost ratepayers less or equal to their current plans with SDG&E, adding this is something which has also borne out in other jurisdictions statewide.

SDG&E also, perhaps oddly at face value, spoke out in support of the bill during the public comments portion of the City Council meeting.

“We support our customers’ right to choose their energy service provider and whichever pathway the city chooses, we’ll continue to operate a clean, safe and reliable grid,” said Vanessa Mapula Garcia, Public Affairs Manager for SDG&E, who added that the company’s energy will still be used on the grid for things such as electric vehicles.

SDG&E’s response can be partially explained by Sempra Energy’s business model shifting in the age of hydraulic fracturing (“fracking”) for natural gas. Mostly known as a major electricity company covering southern California while headquartered in San Diego, Sempra has gone all in on exporting its gas as LNG, or liquefied natural gas.

The company owns the now-operational facility in Hackberry, Louisiana called Cameron LNG, as well as two other proposals: the Energía Costa Azul export facility located in Enseñada, Mexico, which is located on the Pacific Ocean in Baja California; and the Port Arthur LNG facility located in Texas.

Sempra has also begun a pipeline boom in Mexico in the aftermath of the country opening up its energy grid to international energy companies in 2013 via its subsidiary, IEnova. Its proposals have inspired protests led by the country’s indigenous peoples.

The goal of linking U.S. fracked gas to the Mexican export market took a major step forward just a few weeks ago.

Carlo Bonfante, the Mexican State of Baja California’s Secretary of Economic Development, signed onto a memorandum of understanding on August 29 with leaders of several gas-producing U.S. western states as part of the Western States and Tribal Nations. Formerly known as the Western States Rural Natural Gas Initiative, the group is run by the industry-funded front group Consumer Energy Alliance.

“Baja California has an extraordinary opportunity for natural gas exports to Asia and South and Central America,” said Bonfante in the press release disseminated by Consumer Energy Alliance about the MOU. “We are improving our ports and rail so we have many ways to connect to the states around us.”

The San Diego energy plan has also faced criticism from both the Sierra Club and the local branch of the International Brotherhood of Electrical Workers union for having squishy language around banning buying nuclear power and for lack of binding language about hiring unionized workers for local energy projects. The passed version of the plan only says that the Joint Power Authority should move toward signing a deal which “excludes coal and avoids nuclear contracts.”

“Unfortunately, there are significant gaps and concerns with this flawed proposal that need addressing,” the two groups stated in a press release. “It leaves the door open to fossil fuels through renewable energy credits and nuclear energy, the labor and workforce language is weak and confusing, and the community engagement and transparency provisions are vague and lack accountability.”

California Assembly Appropriations Committee Chairwoman Lorena Gonzalez (D-San Diego), who worked as a lawyer for labor unions before entering the political sphere, hinted that a state legislative fix may be in the works on this set of issues which has vexed the San Diego community choice energy agreement.

Hmmm. Sounds like a bill is needed.
CCAs need to be banned from using coal, nuclear… they need to be transparent and they need a jobs component that includes local hire and a skilled & trained workforce. Stay tuned.

Community choice programs in California have also come under fire for not always creating new local renewable energy generation, but simply buying that energy off of the grid from other states and then selling its own fossil fuel energy to other states. It’s a concept called “shuffling,” because it doesn’t “increase the amount of green energy available” nor “reduce the amount of greenhouse gases going into the atmosphere,” the outlet Voice of San Diego reported.

“Ultimately, California needs to support the deployment and integration of new clean energy resources, not merely the reallocation of existing generation,” Danny Cullenward, a researcher at Stanford University, further explained to Voice of San Diego. 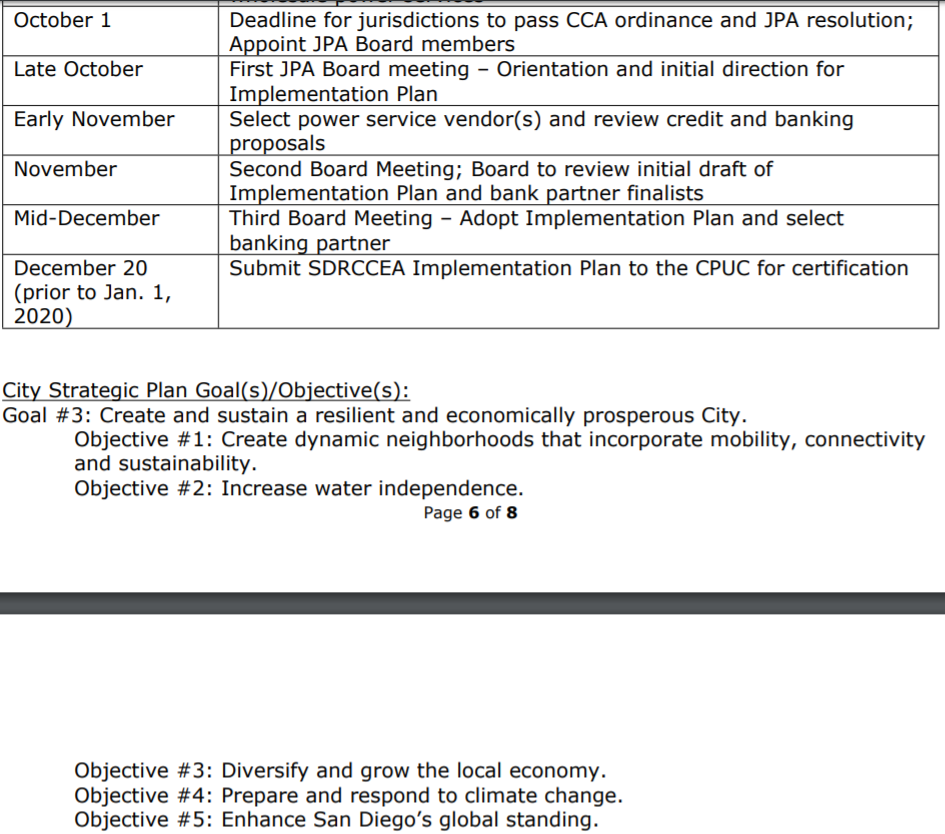 The Joint Powers Authority will now act its own government agency, with a Board of Directors to be appointed by member cities’ mayors by October 1. It will meet several times between now and the end of the year and must submit its electricity plan to the California Public Utilities Commission by January 1, 2020 for consideration. The City Council aims for the new electricity plan to begin in 2021.

Steve Horn is a San Diego-based climate reporter and producer. He was also a reporter on a part-time basis for The Coast News—covering Escondido, San Marcos, and the San Diego North County region—from mid-2018 until early 2020. Also a freelance investigative reporter, his work has appeared in The Guardian, Al Jazeera America, The Intercept, Vice…