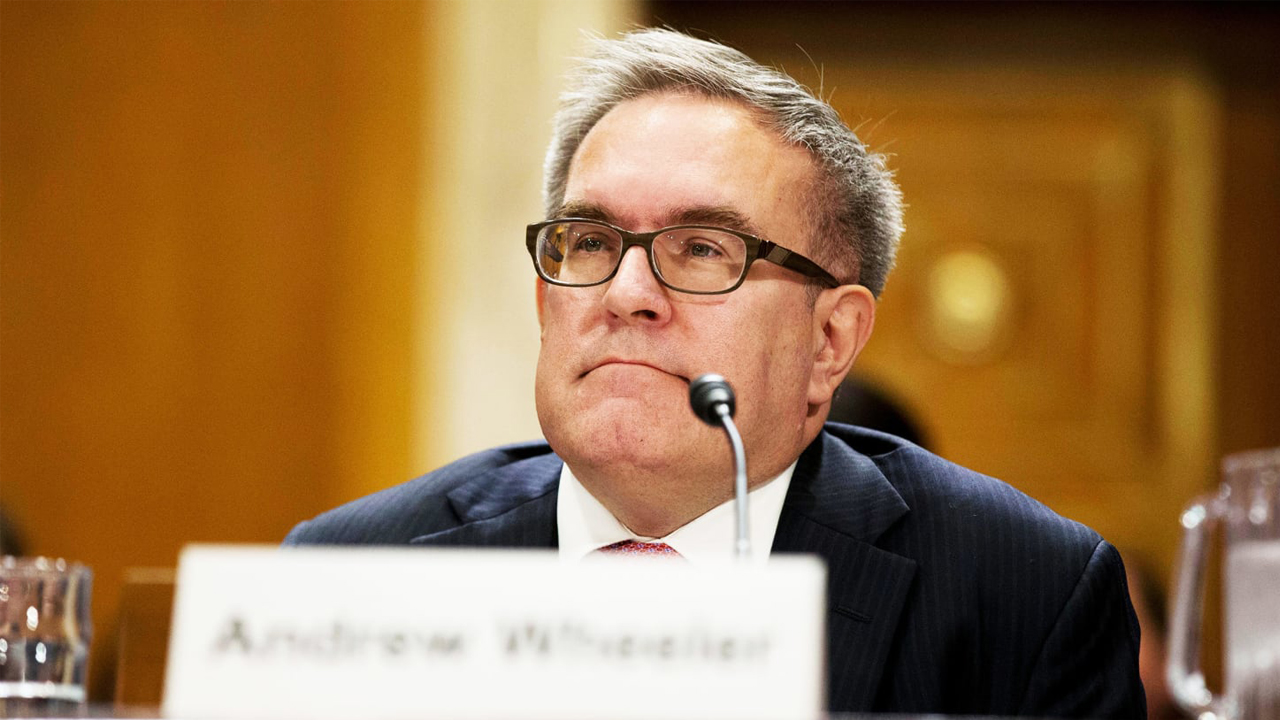 “This is an outrage! Shut down Wheeler, not the EPA,” shouted one protester.

Wheeler has served as acting Environmental Protection Agency (EPA) administrator since Scott Pruitt resigned in July. At his confirmation hearing to become the EPA’s permanent chief on Wednesday, the former coal lobbyist faced staunch criticism—even after Capitol Police removed the protesters from the room.

“I do not believe that giving the acting administrator a speedy promotion is more urgent and more important than protecting the public from contamination to our air and water and lands,” said Delaware Senator Tom Carper in his opening remarks. He also questioned Wheeler about the EPA’s moves to deregulate car mileage standards and toxic mercury emissions.

Vermont Senator Bernie Sanders said that Wheeler failed to mention climate change in his opening remarks, and asked him about his belief in the climate crisis. “The scientific community says that climate change is one of the great crises facing our planet and if there is not unprecedented action to transform our energy system away from fossil fuels to sustain energy and energy efficiency, there will be irreparable damage in the United States and in virtually every country on Earth,” said Sanders. “Do you agree with the scientific community?”

“I would not call it the greatest crisis, no sir,” said Wheeler. “I consider it a huge issue that has to be addressed globally.”

He went on to say that his administration is taking steps to reduce carbon emissions. But as Guardian environment reporter Oliver Milman noted, a Harvard study forecasts that the EPA’s current proposals will increase carbon emissions by 8.7% in 18 states and Washington, DC by 2030.

Massachusetts Senator Ed Markey asked Wheeler about a federal report released on Black Friday which showed that climate inaction could cost the U.S. hundreds of billions of dollars per year and kill thousands of people.

Wheeler responded that he’d not been fully briefed on the report because of the government shutdown. “They gave me a number of background info to read and we scheduled additional briefings on it for early January, but those have been postponed,” he said. 95% of the EPA is currently furloughed.

Days before the hearing, four Democratic Senators said that Wheeler might have been breaking the law by using EPA staff to prepare.

“It is difficult to understand how preparing you for next week’s confirmation hearing credibly falls within any of the categories listed in EPA’s Contingency Plan, particularly the category of employee that is ‘necessary to protect life and property,’” wrote Senators Tom Carper, Ben Cardin of Maryland, Sheldon Whitehouse of Rhode Island, and Chris Van Hollen of Maryland in a letter to the EPA.

Mother Who Confronted Scott Pruitt Responds To His Resignation

The EPA defended Wheeler. “Participation in and preparation for a confirmation hearing that has been scheduled by Congress is clearly excepted under Department of Justice, Office of Legal Counsel, opinions,” EPA General Counsel Matt Leopold said in a statement last week.

But critics say the hearing should have been postponed. Two days before the hearing, leaders of nine major environmental groups sent a letter to Senate Majority Leader Mitch McConnell and Environment and Public Works Committee Chairman John Barrasso.

“It is profoundly unfair for Mr. Wheeler to audition for a promotion to lead an agency while the entire agency workforce is locked out and denied their paychecks,” they wrote.

They say as EPA administrator, Wheeler has consistently prioritized the desires of the fossil fuel industry, not the needs of Americans and the planet. “Andrew Wheeler, just before closing the EPA’s doors to its workers, used the agency’s last available resources to begin to undermine long-standing protections against mercury pollution, at the request of the coal industry, at the expense of the American children and unborn babies,” they wrote.

“We deserve an EPA administrator who will prioritize the agency’s mission of protecting public health and enforcing laws like the Clean Air Act and Clean Water Act rather than rushing to a job interview so he can keep doing favors for the industry for which he served as a high-paid lobbyist.”

At the hearing, Rhode Island Senator Sheldon Whitehouse questioned Wheeler about his ties to coal executive Robert E. Murray. He noted that Wheeler had attended a meeting with Energy Secretary Rick Perry and Murray in 2017, and showed Wheeler a photograph of Murray and Perry embracing.

Wheeler protested. “That’s not me,” he said.

“No,” Whitehouse said. “That’s your client.”

In his testimony, Wheeler touted dozens of EPA rollbacks enacted under his leadership, including relaxed carbon emission limits on power plants and freezing fuel efficiency standards for cars.

“Through our deregulatory actions, the Trump administration has proven that burdensome federal regulations are not necessary to drive environmental progress,” he said.