Australia is on fire.

The new decade has opened with a sobering and scary climate change reality. The state of New South Wales is in a designated state of emergency because of fires. At least 25 people have died as a result of those fires. Thousands of people have been displaced. Wildfires have destroyed more than 12 million acres of land across the Australian continent—an area almost seven times the size of the 2018 California wildfires (the worst in state history). And in the time it took to write this article, the estimated number of animals killed has jumped from a conservative 480 million to a full 1 billion. 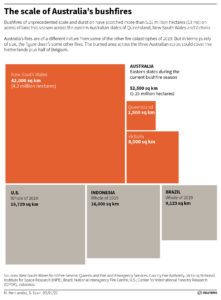 “Australians need only wake up in the morning, turn on the television, read the newspaper or look out the window to see what is increasingly obvious to many – for Australia, dangerous climate change is already here,” wrote Michael Mann, a climate scientist who teaches at Penn State University, in an article published by The Guardian. “It’s simply a matter of how much worse we’re willing to allow it to get. Australia is experiencing a climate emergency. It is literally burning.”

In New South Wales alone, home of the country’s largest city of Sydney, 136 fires are still burning and 69 are still uncontained. The year 2019 was also the hottest and driest on record in Australian history.

“When the vegetation is just dry, it will burn,” Crystal Kolden, a wildfire researcher at the University of Idaho, told The New York Times. “But when you add this extreme heat, it magnifies the effect allowing it to burn that much more intensely.”

The situation is so dire that Prime Minister Scott Morrison, a climate change denier, has ordered 3,000 military reservists to help battle fires and evacuate stranded individuals along the New South Wales coast.

Yet Morrison, who brought a lump of coal to Parliament in 2017 while defending that industry’s greenhouse gas footprint, has denied that the country’s greenhouse gas emissions have (metaphorically) provided a spark for the fires. Australia is the world’s top exporter of coal, the most intensive carbon emitting fossil fuel on the planet, and the third largest exporter of fossil fuels behind Russia and Saudi Arabia.

“The suggestion that in any way shape or form that Australia—accounting for 1.3 percent of the world’s emissions—are impacting directly on specific fire events, whether it is here or anywhere else in the world, that doesn’t bear up to credible scientific evidence,” Morrison recently told Australian Broadcasting Corporation radio.

In the past year, Australian diplomats deployed an emissions accounting loophole regarding the United National global climate agreement. Instead of abiding by the Paris agreement from 2015, the country has chosen to use a carbon accounting loophole from the 1997 Kyoto protocol. The loophole, according to an article published by The Guardian, offers carbon credits to Australia that are eight times the current greenhouse emissions numbers for smaller Pacific island countries. It is the only country in the world to still use that accounting trick.

This is big! Australian Gov admitting it is going it alone in the world in trying to use 367 million tonnes of controversial Kyoto credits to cut its climate efforts. #auspol #climatestike
Will have to defend this loophole solo at #COP25
@p_hannam @adamlmorton @OBenPotter https://t.co/bOmH7Tv0gJ

“…[Prime Minister] Scott Morrison appears remarkably indifferent to the climate emergency Australia is suffering through, having chosen to vacation in Hawaii as Australians are left to contend with unprecedented heat and bushfires,” he wrote. “Morrison has shown himself to be beholden to coal interests and his administration is considered to have conspired with a small number of petrostates to sabotage the recent UN climate conference in Madrid.”

Scientists say Australia’s fires could still burn for months to come, and peak fire season has yet to begin.

“The fires over the last three months are unprecedented in their timing and severity, started earlier in spring and covered a wider area across many parts of Australia,” David Karoly, an Australian government climate scientist, told The Washington Post. “The normal peak fire season is later in summer and we are yet to have that.”