Saudi Arabia has been accused by the Congressional 9/11 investigation of facilitating the 9/11 attacks and by Clinton emails of funding ISIL, so why does the monarchy get so much leeway from the US? Souciant.com's associate editor Zenab Ahmed takes up this question.

Saudi Arabia has been accused by the Congressional 9/11 investigation of facilitating the 9/11 attacks and by Clinton emails of funding ISIL, so why does the monarchy get so much leeway from the US? Souciant.com's associate editor Zenab Ahmed takes up this question. 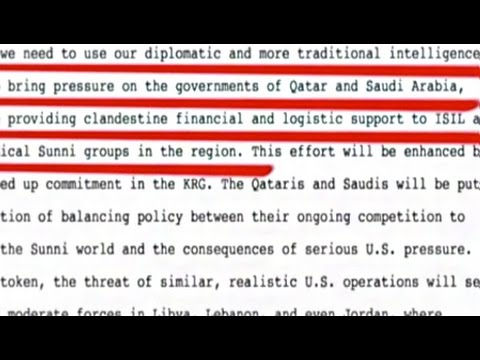 SHARMINI PERIES, TRNN: Welcome back to The Real News Network, I’m Sharmini Peries coming to you from Baltimore.

In the recently released WikiLeaks of Clinton emails, Hillary Clinton wrote to John Podesta who was then Counselor to President Obama and now Clinton’s campaign manager. She wrote: “We need to use our diplomatic and more traditional intelligence assets to bring pressure on Qatar and Saudi Arabia, which are providing clandestine financial and logistical support to ISIL and other radical Sunni groups in the region.

Joining us now to discuss the significance of Clinton’s statements for US Foreign Policy is Zenab Ahmed. He’s joining us from London to take a closer look at all of this. Zenab is an associate editor of Souciant.com and also a Ph.D. student at SOAS at the University of London. Thanks for joining us, Zenab.

PERIES: Zenad, more than 2 years ago, during a speech at Harvard, Vice President Joe Biden also said that US allies, funding extremists fighters in Syria and in the region. Let’s have a look at this:

VPOTUS JOE BIDEN: What my constant cry was, that our biggest problem was our allies. Our allies in the region were our largest problem in Syria. The Turks were great friends and I have a great relationship with Erdoğan, which I get to spend a lot of time with. The Saudis, the Emirates, et cetera. What were they doing? They were so determined to take down Assad and essentially have a proxy Sunni-Shia War. What did they do? They poured hundreds of millions of dollars, tens of thousands of tons of weapons into anyone who would fight against Assad, except the people who were being supplied were Al-Nusra and Al-Qaeda and the extremist elements of Jihadis coming from other parts of the world. Now, you think I’m exaggerating, take a look. Where did all of this go?

PERIES: So, Zenab, as you can see, this is not the first time that a US official of this stature has made this connection between funding of ISIS or ISIL, and Saudi Arabia, and Qatar. Biden and Clinton has now come to this conclusion, what does this mean? What is the significance of it?

ZENAB AHMED: Well, it indicates that the Clinton campaign as well as Hillary Clinotn herself are willfully admitting that there’s a problem here in the relationship between the United States and its allies in the Persian Gulf, including Saudi Arabia, including the other smaller monarchies that are there. It also indicates that a Clinton government would attempt to explore more stable options, going forward. It’s not likely to abandon its relationship with Saudi Arabia, however, it is willingly acknowledging that there are issues to be resolved within that relationship. And Hillary Clinton is probably not particularly thrilled that these emails leaked. However, they do seem to indicate that she will be taking a heavier hand when it comes to shaping that relationship, going forward. When it comes to repairing the ties that she sees have been broken by President Obama’s rapprochement with Iran.

PERIES: Now, we know for a fact that this is not the first time that the Saudi Arabian monarchy has been given this kind of leeway by the US government. The Bush Administration actually had a very intimate relationship which also led to 9/11 attacks when we discovered that Saudis had a role to play in the 9/11 attacks and recently redacted pages that was released to the public all clarify the role that the Saudis did play in 9/11. How come the Saudis get so much leeway?

AHMED: I think part of that is pretty obvious. You have a superpower that really needs local allies in the region that are willing to project its interests, and requires allies that are willing to secure the flow of oil, and are willing to go along with American interests when it comes to geo-political stability in and around oil-producing countries. Saudi Arabia has been able to take advantage of that in order to pour its money to pursue its own interest and in order for conservative factions of its society to pursue their interest.

PERIES: Now Bilal, Qatar and Saudi Arabia are not only involved in this conflict but they’re also involved in Iraq and Syria. What role do these countries and Saudi Arabia in particular, play in driving counter-revolutionary forces throughout the Middle east, particularly after the Arab revolts in Arab Spring?

AHMED: Well, this is really what the email is about. The Gulf [inaud.], including Saudi Arabia have a stake in empowering extremely far-right Islamist forces from gaining power. And the reason why is because it subverts established liberal-democrat forces as well as more raidically-democratic forces from gaining power in these countries and potentially forming a systemic alternative to the monarchies and their forms of government. That includes their mild toleration of Islamism that never quite goes too far and as well as their embrace of the neo-liberal capitalism. The real danger of the Arab Spring is that numerous countries in the region could stumble into alternative forms of government, whether in Egypt, or in Yemen, or in Syria. As a result, there have been aggressive moves to shape events on the ground in order to thwart that from happening, with a variety of dangers that present themselves to monarchies like that of Saudi Arabia.

Its worth concluding with a note that this has actually happened before. During the initial period of the colonization on the 50s and 60s, especially, you had a collection of military coups and nationalist uprisings throughout the Arab world that brought leaders like Al Nasser or Gaddafi in Libya to power. These were extremely threatening to monarchies in Saudi Arabia. And then as of now, they attempted to consolidate their interest and push back against the wave in order to back, either conservative elements in the countries or back conservative moves against those governments. And as a result, the monarchies survived. The monarchies are behaving in quite a similar manner in reaction to the Arab Spring. Although, the Arab Spring was such an all-encompassing social event that it remains to be seen whether or not it will be successful. Also, it has involved several civil wars that have been quite costly. And have committed monarchies especially Saudi Arabia to incredible amounts of international reputation loss as well as, in the case of Yemen, military loss and loss on human terms as well.

PERIES: And where does this leave Qatar and Saudi Arabia, in terms of the GCC, the Gulf countries’ alliance?

AHMED: the GCC is more or less still stable. However, the GCC has been wracked by a bit of instability just as a result of the fact that many of these conflicts were promised to end in relatively little time – especially the conflict in Yemen – Syria as well. And Gulf involvement in the East countries shouldn’t have been as extensive as it ended up becoming, it also shouldn’t have been as direct. So, Saudi Arabia needs to: one, end its GCC involvement in these conflicts at some point in the near future, and two, repair ties between it and some of its junior partners because there is tension there as a result of how long these wars have been going on and how many spill-over effects there have been especially when it comes to the direct losses to GCC military forces as in the case of Yemen but also the loss of GCC funds and damage to the GCC’s international reputation as it has happened in Syria.

PERIES: Zenab, I think you so much for joining us and hope to have you back very soon.