Aid Dependency, Unemployment Remain High in Gaza But Some Get Rich

For the majority of Gazans, life is unbearable under the Israeli blockade. But there's an emerging wealthy class, a group of new millionaires benefiting from the tunnel smuggling business between the Gaza-Egypt border.

For the majority of Gazans, life is unbearable under the Israeli blockade. But there's an emerging wealthy class, a group of new millionaires benefiting from the tunnel smuggling business between the Gaza-Egypt border. 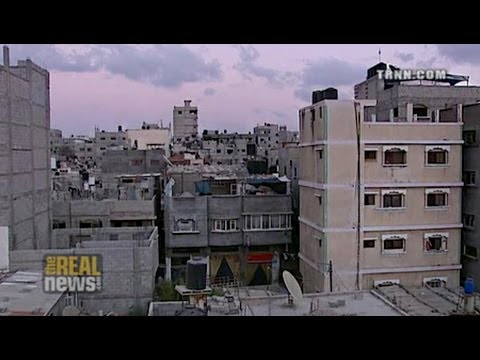 NARRATION: The ongoing 6-year Israeli siege, which has generally hurt the economy in Gaza, is producing a small wealthy economic elite while the vast majority of Gazans suffer.

The grinding poverty of most people in Hamas-ruled Gaza is a result of years of suffocating Israeli blockade, as well as the corruption and mismanagement of the local government. Some blame authorities for failing to address the problems that plague daily life, while others hold the West Bank centered Palestinian Authority lead by President Mahmoud Abbas responsible. They say that the Abbas’ government has abandoned Gaza.

The wealthy elite is comprised of those who have stable monthly income. For example Hamas and the Palestinian Authority government employees or those that work in the private sector. This minority can afford to dine at expensive restaurants like the light house restaurant, Al-Deera, or the MÃ¶venpick Hotel.

Sound bite: "Gaza’s population under the siege remains largely impoverished , there are families here that have inherited wealth from previous generations and there are even a few people who manage to become wealthy under the siege. But for the most part, the overwhelming majority of the population relies on international aid funded by UNRWA and private agencies"

The territory also has an established middle class of old merchant families, senior aid officials and loyalists of Fatah, a Palestinian group that rivals Hamas, but thereâ€™s less resentment toward them â€” perhaps because they are not in power.

The new signs of prosperity are due to a mini-construction boom that can be traced back to Israelâ€™s easing of the blockade it imposed on Gaza in 2007.

The newly opened shopping malls and supermarkets as well as cafÃ©s and hotels are allowing a tiny middle class to flaunt its wealth in the impoverished Gaza Strip. These luxurious establishments cater exclusively to a small group of wealthy Gazans.

Piece to Camera: Established capital owners make about 10% of Gaza’s populations but the new wealthy class, many associated with Hamas benefited from the huge smuggling trade from 2007 until 2011.

During the past 5 years, some people, especially tunnel owners, have become rich benefiting from people’s suffering under the blockade and division.

In contrast to the wealthy, the poor, can only afford to go to open spaces like a park or take their families out to enjoy a day out and walk along a 2km stretch of the sandy, pot-holed Al Rasheed coast road which has been proudly transformed into a popular recreational space Where people can enjoy the beach.