One Year After Paris Attacks, France Moving Towards Permanent State of Emergency 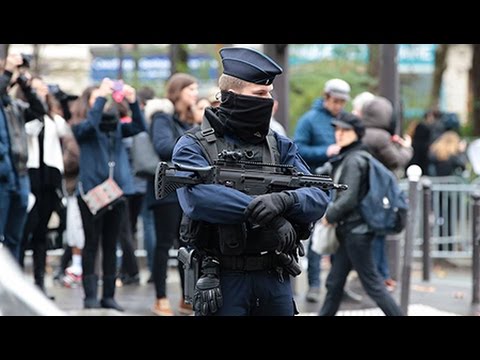 November 13th was the 1 year anniversary of the terrorist attacks last year in Paris which left 130 people dead and 367 injured. Following the attacks, French MPs declared a state of emergency which granted Sweden powers to French security services.

The state of emergency has now been extended 3 times. Exactly two weeks before the anniversary, journalist Mark Reese revealed that the French government now seeks to quietly create a national diametric database. This will collect and store the personal information of the French population of 60 million people.

YASSER LOUATI: Thank you for having me.

NOOR: So could you perhaps start by just explaining to us what it means in practice for there to be a state of emergency. What are the implications of this inference?

LOUATI: It’s a state of emergency which means it’s supposed to be an emergency, a temporary measure to get broad the progress to the executive branch and of course to supposedly get more time in order to lead investigations and apprehend the culprits of the attack. The problem is that the state of emergency has been passed very rapidly. It has been extended on multiple occasions and now it has been over a year. The prime minister is speaking about extending it until the presidential election in May.

Practically speaking that means you can raid homes without warrants. You can agitate people without warrants. You can search their homes. You can raid their businesses. As it has been happening for the past year or so. The reserves are quite striking and worrisome. 4 thousand raids have bene carried so far, leading only to 6 inquiries of terror charges. At the same time, the government has passed all the extreme measures on the state of emergency to the regular role for example. Now you no longer need to seek the probation or the agreement of a judge in order to put someone under surveillance. You can tap into people’s phone records, emails, browsing history. The books they read. Their amount of data, etc. without having to be worried about being prosecuted.

The worst part is that even if you catch someone bugging your own home, you can’t even sue them or even turn against the French government. Now the TES5s which is a massive by a major database on the whole French population should the government on top of getting more powers in order to sue people and to arrest them, now it’s about literally putting the whole population under surveillance. The TES5 would include for example, your name, your address, phone numbers, email address, your eye colors, your height, everything you have in exchange in the government in one single file. That file will also be shared with every single intelligence agency in France, on top of the central administration of the police and since the police would be directly using it without going before a judge, that means the information system of the shaken space which is an open boards space in Europe, we also have access to it as well as Interpol.

There are reasons to worry in France and if people say we are living under a police state, they are not lying anymore.

NOOR: Now how successful have the new powers been that have bene granted to the security services in preventing further attacks and apprehending those implicated in past attacks because the French government has sort of defended the creating of this TES and other security services by saying they need these policies in place to protect the French people form potential terrorist attacks.

LOUATI: Every single government tries to justify extreme measures, needs to justify them by saying that these are exceptional times requiring exceptional measures. But if you’re looking for results, the state of emergency and all of the extreme power obtained by the government, the mass surveillance and also this TES5 have proven so far not to be effective in any shape or form. For example, right after the November attacks we also had a series of attacks targeting France and even the domestic intelligence is asking the government to stop applying measures and to focus on applying a proactive strategy and to work directly with communities.

As early as January 2016, the current Minister of Justice Jean-Jacques Urvoas himself said that the state of emergency is becoming useless. So the question is why is the government continuously seeking extra powers when on the ground it is not showing any results. When you look at the social unrest going on in France and the open defiance towards the government where you might be able to think that. While the government wants to make sure they have all the necessary powers to crack down against this sort of rebellion.

NOOR: Talk about the response from Human rights organizations and other members of the public to the actions of the security services since the state of emergency was first implemented.

LOUATI: All of these organizations have said that the state of emergency has targeted Muslims first and is now creating a precedent because there is no going back from it. We can see it when you have the prime minister himself, the President of France François Hollande, trying to implement a permanent state of emergency by amending the constitution. You can literally say that we are drifting to a more and more authoritarian state despite all the opposition from within the government and also for human rights and civil liberties activists.

LOUATI: When first the emergency has been targeting Muslims in fact when you could for example, the chief of staff for a local prefect who said we have been deliberately targeting practicing Muslims, especially when it becomes visible. That’s not a myth that’s a reality and official policies being fought by the government. But also these policies have been targeting Muslims were also extended to the economic summit of [inaud.] in Paris last year. It was also extended to be applied I guess the marchers going against the labor reform. It is now being implemented to crack down on journalists who are dissidents. It is also used, for example, against any organization that goes against the government’s official policy. There are reasons to worry because the government even tried – I do not know how far they went with the project but they sought to withdraw from the European provision on human rights.

NOOR: Thank you so much for joining us and we’ll be sure to continue to follow the all out from the TES’s implementation.

LOUATI: Thank you for having me.

NOOR: And thank you for having us on the Real News Network.

Yasser Louati is French human rights and civil liberties activist and researcher. He has been until now the spokesperson for the Collective Against Islamophobia in France (CCIF) and head of its international relations desk. He is currently leading a coalition effort against the current state of emergency in France, PREVENT in the UK and skyrocketing…