Canadian Armed Forces an Adjunct to US – The Ugly Canadian

Yves Engler: The Canadian government played a major role in the bombing of Libya. It was a Canadian general that oversaw the whole NATO mission and approved the bombing targets.

Yves Engler: The Canadian government played a major role in the bombing of Libya. It was a Canadian general that oversaw the whole NATO mission and approved the bombing targets. 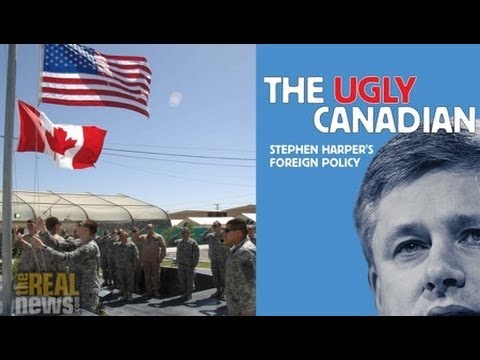 We’re continuing our series of interviews about the book The Ugly Canadian: Stephen Harper’s Foreign Policy. And joining us again from Vancouver is Yves Engler, the author of that book. Thanks for joining us, Yves.

YVES ENGLER, AUTHOR: Thanks for having me.

JAY: So Canada historically has tried to have the image, and on some occasions actually done so, of being real supporters of international law. And I suppose the most important case of that was the U.S. invasion of Iraq, where Prime Minister Chretien stayed out of the Iraq War, and primarily as the reason gave that there had not been a clear Security Council resolution endorsing it, and because of that, under tremendous pressure by the United States, would not join the Iraq War. Of course, Canada did send troops and continues to participate in Afghanistan. But if you look at Stephen Harper on Libya, the resolution of the United Nations was rather clear, whether you agree with it or not. It was about support for Benghazi; it was not about regime change in Libya. And I remember very clearly Prime Minister Cameron of Great Britain being interviewed where he emphatically said many times, this is not about overthrow of Gaddafi, it’s not regime change, it’s a defensive position only. And of course we know what actually happened. So what was Canada’s role in all of this?

ENGLER: Well, the Canadian government was a major proponent, played a major role in the bombing of Libya and the whole campaign. It was a Canadian general that oversaw the whole NATO mission that signed off on all the different bombing targets. And as a result, Canadian fighter jets were involved in some of the most violent of the bombing campaigns, in that Canadiansâ€”some other countries had controls on where their fighter jets could drop bombs, whereas because it was a Canadian general directing everything, Canadian fighter jets never said no to any of the bombing campaigns. Something like 10 percent of all the sorties were by Canadian jets.

And the Harper government was active in all the different levels. In June, the foreign minister, John Baird, just after becoming the foreign minister in the Conservative government, he immediately went to Benghazi to meet with the rebels. We know, according to Access to Information, that he encouraged them to keep up the fight. So he wasâ€”you know, continued the war.

We know now that Ontario companies sold a drone to the rebels, explicitly in contravention to the UN resolution 1970, and then, later, 1973, about weapons to the rebels. We know thatâ€”or at least there was many media reports about Joint Task Force to the Canadian special commandos that they were actually on the ground in Libya. There’s reports out about how the Canadian fighter jet was in the air at the time when Gaddafi was killed by a NATO strike. It’s not clear if the Canadian jet launched the missileâ€”or I’ve heard claims it was a French fighter jet. It’s not exactly clear. And, of course, that whole incident, there was incredible war crimes that took place on the ground when Gaddafi was killed, and something like 75 of the people around him or that were caught by the rebels were executed.

JAY: Yeah, Human Rights Watch did an investigation and report which verified that information.

ENGLER: And that’s all stuffâ€”you know, there hasn’t been, basically, any comment from Canadian military political officials since then, after the war. Not long after the bombing of Libya, there was a big celebration. The Conservative government spent $850,000 celebrating the Canadian military effort there, and, you know, they talk it up regularly. But all the human rights violations that transpired in that process and the ongoing conflict is basically not discussed by the Canadian government, or for that matter the dominant media here.

JAY: Now, I mentioned the Iraq situation, where I think there was a break with, certainly, traditional Anglo-American-Canadian foreign policy, where Canada stayed out ofâ€”mostly out of the Iraq War. But if you take that away, do you see that much difference between Harper and the Liberals when it comes to the issue of the United Nations and international law?

ENGLER: In the case of Iraq, the ChrÃ©tien government didn’t go into Iraq, and that’s mostly because there was 150,000 people in the streets of Montreal opposing that. So they didn’t give the official endorsement. But they did actually provide a whole bunch of different forms of support to Washington in that war, and they may have been the fourth or fifth biggest contributorâ€”quietlyâ€”to the war effort in Iraq. And the just-stepped-down head of the Canadian military, Walter Natynczyk, was actually in charge of 35,000 troops in Iraq at one point. He was tied in with the U.S., leading efforts down in the U.S., and then he actually went to Iraq and participated.

So there was a bunch of different forms of Canadian support for Iraq, but not the most important form, which was the official endorsement of the coalition of the willing. And the reality is, the history is is that Canada has generally gone along with American military endeavors, be it going back to the Korean War, 1950-1953, and continuing on into Libya. And I think that the Canadianâ€”there’s something like 250 different agreements between the Canadian military and the American military. There’s very close ties. Most of, you know, the purchasing of the F-35 fighter jets that the Conservative government is pursuing is as a way to be interoperable with the American military or to be, you know, well tied intoâ€”.

JAY: And that’s a bigâ€”this interoperability is a big phrase, because most, I think, of the Canadian military is interoperable with the American, is it not?

JAY: So should the title of your book been The Uglier Canadian?

JAY: Okay. We’re going to continue our interview with Yves and go through other chapters of the book, which deal with other elements of Harper foreign policy. So look forward for that, or look towards that.

And don’t forget we’re in the midst of our fundraising campaign for 2012. We have a $100,000 matching grant, and if you click on that Donate button, every dollar you donate gets doubled, which means in 2013 we can keep doing The Real News. So please click on it, ’cause if you don’t, we can’t do this.