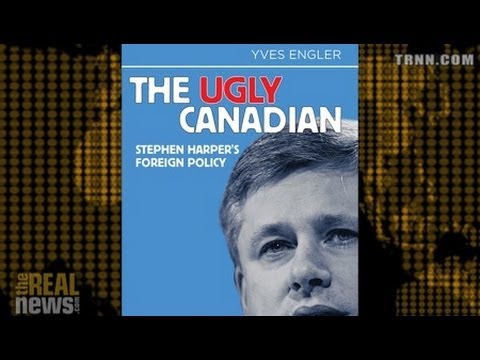 Canada has always had the global reputation as being a sort of peaceful country supporting the United Nations and the blue helmets actions. But many have also suggested that Canada in fact has been a quite willing complementary partner to the Anglo-American alliance and various military adventures by the United States, with the notable exception of Iraq. But from Vietnam right through to actions in Haiti, Canada in fact has followed its own interest in perhaps not such a loving, peaceful way as it likes to think of itself. And now Stephen Harper’s new government is perhaps going even further in that direction.

And joining us to talk about all of that is Yves Engler. He’s a Canadian commentator and author. His most recent book is The Ugly Canadian: Stephen Harper’s Foreign Policy. Thanks for joining us. And Yves joins us from Vancouver.

YVES ENGLER, AUTHOR: Thanks for having me.

JAY: So, Yves, we’ve decided we’re going to go through your book. We’re going to do a segment per chapter, ’cause each chapter kind of deals with a different piece of the Harper foreign policy. And in the course of that, we’ll talk a little bit about whether this really is that quantitative or qualitative change from Canada’s past. But we’re going to start with environmental policy and the issue of the tar sands and such. So what is Harper’s policy when it comes to climate change, global warming, and what may be one ofâ€”the Earth’s number-one source of carbon dioxide, and that’s the tar sands located in Stephen Harper’s political base in Alberta?

ENGLER: Stephen Harper’s government has made it very clear that they oppose, basically, all international efforts to reduce carbon emissions from the atmosphere. They’ve pulled out of the Kyoto Protocol back in December. They’ve underminedâ€”sabotaged, reallyâ€”repeated international climate negotiation meetings. Five years running they’ve received the Colossal Fossil given out by hundreds of environmental groups for being the country that’s done the most at these different international meetings to undermine the negotiations. So they’ve been very clearly opposed to these efforts, and in the context of the Climate Vulnerability Monitor reporting that 400,000 people are already dying ’cause of climate disturbances. That’s, of course, mostly not Canadians; that’s mostly people inâ€”vulnerable people in places like Bangladesh and Ethiopia.

But the Harper government really doesn’t care about the consequences of runaway global warming, and that is because, as you mentioned, their base of power is really the tar sands. Obviously, Harper himself is a member of Parliament from Calgary, which is the home to most of these different Canadian energy companies, and the Conservative Party’s base of political power is, of course, Alberta, which is the home to most of the tar sands industry. So the Harper government has been very hostile to attempts to reduce carbon emissions [crosstalk]

JAY: And doesâ€”certainly the preponderance of Canadian scientists support the idea that there’s human-caused climate change and carbon dioxide needs to be controlled, and many scientists that are working even for the government, I think, have certainly supported this. But does the Harper government actually oppose this on a theoretical level, disputing climate-change science? Or they simply don’t act on it?

ENGLER: At this point, they don’t publicly dispute it. There’s a somewhat infamous letter that Harper sent in 2002 when he was in the opposition. It was a fundraising letter where he does disputeâ€”quite clearly dispute the science of the matter and calls the Kyoto Protocol the “socialist” plot to get money out of the wealthy countries.

Now, as prime minister, he doesn’t dispute the science of it, but he does go about cutting hundreds of millions of dollars to the scientists that are investigating the matter. He goes about muzzling the different scientists working from Environment Canada that previously, at least, were discussing the issues with the dominant media. So at this point, he doesn’t publicly deny climate change, but all his actions suggest that he just doesn’t care.

JAY: Now, one of the quotes from your book is you say Harper’s on the front lines of fighting for dirty oil. Well, two parts to my question. Is this really that different than the previous Liberal government? Like, did they really take any effective measures? Or was their rhetoric a little more, you know, friendly towards fighting climate change? But did they actually do anything about it?

ENGLER: Certainly the previous Liberal government wasn’tâ€”their rhetoric was a lot better, and they obviously signed the Kyoto Protocol, and then more or less did little to adhere to it.

So in the case of the fuel quality directive the European Union has been discussing for a while, between mid-2009 and mid-2011 there was 110 official Canadian lobbying visits with British and European officials on the issue to exclude the tar sands from the fuel quality directive. And this prompted a Finnish member of the European Union parliament to say that she’s never witnessed a more aggressive lobbying campaign from any state. There’s been more aggressive lobbying campaigns from different industries, but no state has ever lobbied so aggressively about an issue in the European Union.

There is a very aggressive campaign. It includes the Canadian embassies in London working with Shell, in France working with Total, in Norway working with Statoil, companies that have investments in the tar sands. And the Canadian embassies in those countries are working to build opposition from the oil companies, the domestic oil companies in each European country, to oppose the fuel quality directive. And similarly, in the U.S. there’s been very close coordination between the Canadian embassy in Washington and the different domestic American oil companies to build opposition, internal opposition to different attempts to reduce carbon emissions from fuel sources in the U.S. So there hasn been a prettyâ€”this is unique in the history of Canadian foreign policy, to have a Canadian government being so aggressive against all attempts within the U.S. to pass some modestly progressive policy.

JAY: And what’s this done in terms of Canada’s reputation in the rest of the world?

ENGLER: There’s certainlyâ€”one of the reasons the Harper government lost the UN Security Council seat in 2010 was because there is a lot of hostility to Canada’s position around the world. And one of the elements of that hostility is the repeated Canadian sabotaging, undermining of international climate negotiation meetings of just basic statements at different Commonwealth meetings to, you know, make statements about global warming, and the Conservatives have opposed those efforts on a number of occasions.

JAY: Alright. Thanks for joining us, Yves. We’re going to continue going through the different chapters of Yves’ book, which deal with different elements of Harper foreign policy. So stay tuned and look for the next segment of our interview with Yves Engler on The Real News Network.

And don’t forget we’re in the midst of our end-of-year fundraising campaign, and we have a $100,000 matching grant, which we need to match if we’re going to keep doing Real News in 2013. So there’s a Donate button over here. Please click it, ’cause if you don’t, we can’t do this.