Yves Engler: Tragedy in Canadian town turns into an opportunity for some to argue that pipeline transport is safer, when the real argument should be against an oil-driven economy

Yves Engler: Tragedy in Canadian town turns into an opportunity for some to argue that pipeline transport is safer, when the real argument should be against an oil-driven economy 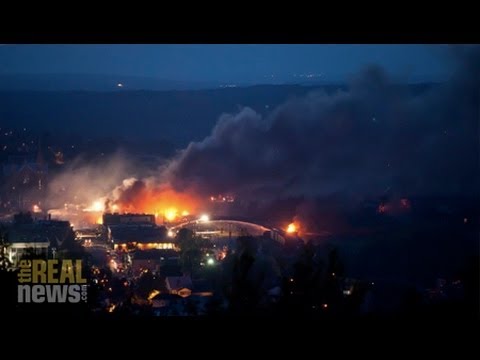 Last month, an explosive train crash carrying 72 wagons of oil leveled a Canadian town east of Montreal, killing 47 people. The company responsible for the crash has refused to pay for the cleanup because, they say, they don’t have the money. According to Montreal, Maine and Atlantic, their insurer is also refusing to pay for the recovery. In response, Quebec Environment Minister Yves-François Blanchette has ordered the company behind the rail disaster to pay for the cleanup, which includes an estimated 5.7 million liters of oil.

Joining us to discuss all of this is Yves Engler. Yves Engler is a Canadian commentator and author. His most recent book is The Ugly Canadian – Stephen Harper’s Foreign Policy. The book explores Canada’s extensive military campaign in Libya, opposition to social transformation in Latin America, and support for a right-wing Israeli government.

Thank you for joining us, Yves.

YVES ENGLER, AUTHOR, POLITICAL COMMENTATOR: Thanks for having me.

DESVARIEUX: So, Yves, my first question to you is about this company. They say they can’t pay. What is your response?

ENGLER: Well, I think it probably–ultimately, when all the cleanup costs are added up together, they won’t be able to pay. They’re talking about $500 million to $1 billion in total cleanup costs.

Obviously, the $8 million that’s been asked of them from the city for the initial phase of the cleanup, they have that money. They’re trying to pass the buck to their insurer. And obviously they want to, you know, spend as little as possible on in the cleanup process.

And it’s just sort of reflective of the company’s general practices, which have been one of cutting costs everywhere. The company specializes in privatizing formerly public-owned railways. And they say that openly. And they’ve also been aggressive in lobbying to reduce the number of engineers on the train. So the train that exploded only had one engineer in charge of it, whereas previously the policy was two, and the MM&A has been aggressive in lobbying for this reduction to one. So it’s a business model that’s oriented around cutting costs, you know, doing as little as possible in terms of safety regulations. And the company’s safety record shows that.

So it’s, I think, just an example of, you know, corporate behavior that is, you know, designed to spend as little and make as much in terms of profit, and this is just an extension of that kind of philosophy.

DESVARIEUX: Let’s talk a little bit more about this business model. You have a Miami-based company as well that received a request to pay for the cleanup. The insurer received a request, as well as, obviously, the company. Each of these companies have said that no, they will not be paying for the cleanup. What do you make of this? Do you think that the practice of subcontracting has fueled this sort of attitude of no culpability, no sense of responsibility?

ENGLER: Yeah. I mean, I think that the–obviously, when you’re talking about up to $1 billion in costs, that’s a lot for any company and a company that’s not that big a company to cover it, and they prefer to go under than to cover it. And the way that the corporate model works is that basically, you know, it allows wealthy people to set aside their legal responsibility by having these subcontractors. So, yeah, it’s a way of avoiding responsibility.

You know, it’s not just the insurer and MM&A, but also the Irving refinery where the oil was going to. There’s been a legal pursuit against them for their responsibility in this, and they’re completely ignoring it. They’re just trying to stay below the radar and not making any comment.

Basically what you have developing here is a situation where where there are profits, the companies take them; where there are costs, they’re going to wait for the government, in this case probably the Quebec government, to some extent the federal government, to pick up the socialization of the costs, which, you know, from the standpoint of the public and the environment is a incredibly damaging process.

DESVARIEUX: Some also have seized this disaster as evidence that petroleum products should be transported through pipelines. What is your response to this argument, especially in light of TransCanada’s announcement?

ENGLER: I mean, that’s the–immediately the Globe and Mail editorial, the leading daily newspaper in Canada, came out saying that this disaster is a sign that, you know, pipelines are the option and are a safer option. And it’s probably correct that pipelines are slightly safer then transporting oil by rail.

But does that mean that pipelines are safe? Of course they’re not. We have many examples of pipeline spills. This train derailment was 5.7 million liters of oil that were spilled into Lac-Mégantic, which is, I guess, about 2 million or a million and a half U.S. gallons. And that’s considered the biggest land spill in North American history, second to, I think, Kalamazoo, the Enbridge spill in 2010, where there was about 3.7 million liters spilled. And, you know, right now we have a company up in Fort McMurray in the tar sands area that is spilling hundreds of liters every day. It doesn’t know how to stop the spill.

So I think the question is is that oil extraction and oil shipping is an inherently dangerous process. So maybe a pipeline is slightly better than rail. But are pipes safe? And are there other alternatives? So, for instance, the other alternative, rather than using this as an argument for, you know, the Keystone XL, which is sort of what the establishment commentators are using the disaster in Lac-Mégantic as a way to push, you know, that kind of pipeline, maybe this is something, maybe this is–there should be something about questioning our reliance on oil, and not just reliance, but the continued expansion of the oil economy and pipeline infrastructure.

And just today, TransCanada has announced that it’s going to a seek approval for a over 1 million barrel a day pipeline called the Canada East that’s going to ship oil from the tar sands. Well, this is, you know, eventually going to get oil from the tar sands to the East Coast, to the Maritimes, where the train was taking the oil that derailed in Lac-Mégantic. And this is just more of the same. It probably will be slightly safer to ship that oil in the pipeline than on rail.

But is it safe, one? And questions of climate disturbances and climate change and the whole orientation of the economy towards oil I think is something that we should look at. And that’s in fact what this terrible disaster in Lac-Mégantic should–that’s the political fallout should be let’s move away from this model, dangerous model of oil shipment, oil extraction, and let’s move towards reining in fossil fuels.

DESVARIEUX: Okay. Thanks so much for joining us, Yves.