Yves Engler: Canada has been openly hostile to Venezuela and leftward swing in Latin America - except in Cuba where Canada has large commercial interests

Yves Engler: Canada has been openly hostile to Venezuela and leftward swing in Latin America - except in Cuba where Canada has large commercial interests 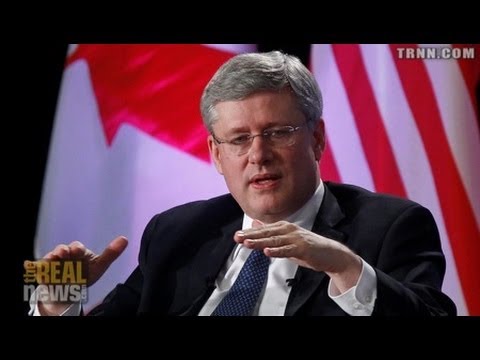 So Yves, as I said, is a Canadian commentator and author, and his recent book The Ugly Canadian is all about Stephen Harper’s foreign policy. Thanks for joining us again, Yves.

YVES ENGLER, AUTHOR AND POLITICAL COMMENTATOR: Thanks for having me.

They’ve responded to the coup against Fernando Lugo back in June this year. They wereâ€”Canada was the only country to recognize the new government in Paraguay that had overthrown Lugo, who had ended 61 years of one-party rule.

The Canadian government wasâ€”tacitly supported the coup in Honduras against Manuel Zelaya in June 2009. Canada was the only country to notâ€”only major donor to Honduras to not cut off some of its aid after the coup. The European Union, the World Bank, even Washington suspended some of its aid. Ottawa refused to suspend its aid to Honduras after the coup, maintained the military training assistance program whereby a handful of Honduran troops are trained by the Canadian military of Canada, so many different public comments in support of the new post-coup government in Honduras. So they’ve taken a very right-wing position on Latin America, close to, obviously, the Canadian mining companies that are huge players throughout the hemisphere.

JAY: I was kind of taken by an experience I had in Venezuela. I was visiting and doing some reports and interviews and some other things. I went to visit the Canadian Embassy, just to sort of pay my respects and see what they had to say about the situation. And without even telling me they were doing this, they set up a meeting for me with seven or eight opposition members. And it was a briefing session on the situation in Venezuela. And it was essentially one horror story after another about the ChÃ¡vez government and what was going on in Venezuela. And it seemed extraordinarily activist for me that the embassy would do that. It’s kind of interesting they did it without even hiding the fact they were doing it. They were quite unabashedly promoting the opposition. I mean, is this a reflection of Canadian embassies and foreign policy throughout Latin America?

ENGLER: Yeah, I think it would be a reflection. When there’s a government in power that is not seen as serving the interests of foreign investors or, you know, Washington-led geopolitics, which is the case with ChÃ¡vez, the Canadian government’s hostile. In the case of ChÃ¡vez, there’s been a number of reportsâ€”it’s hard to get, you know, confirmation of all the details, but a few different investigative reports have shown that Canada, the Canadian aid agency and the Canadian embassy in Venezuela have been fairly significantly involved in funding opposition groups. Hundreds or thousands of dollars a year are going to different Venezuelan opposition groups. And Canada is, after the U.S.â€”obviously, U.S. is spending (different reports) into the millions, tens of millions of dollars a year in terms of funding opposition groups in Venezuela.

JAY: It’s kind of ironic, actually, ’cause I’ve never heard reportsâ€”I may be wrong, but I’ve never heard of reports of Canada funding opposition groups in Cuba, where there’s such significant commercial interest of Canada, they don’t want to piss off the Cuban government. But in Venezuela, which they accuse Venezuela of being a sort of dictatorship the way Cuba is, they’re unabashedly supporting the opposition.

ENGLER: There’s a longstandingâ€”you know, it’s sort of the policy of the Canadian government towards Cuba. There isâ€”there have been some reports, much less so than in the case of Venezuela, of some Canadian funding to, you know, pro-democracy movements in Cuba, but, no, much less than the case of Venezuela. And the Harper government and the Canadian government, you know, before that the Paul Martin government and ChrÃ©tien, but the Harper government particularly, is very clearly hostile to ChÃ¡vez and is clearly hostile to the leftward shift in Latin America and has enhanced aid to the more right-wing governments.

You know, the free trade agreement they signed with Colombia, with the Uribe government in Colombia, that was explicitlyâ€”you know, the minister said explicitly, was designed to support Colombia in competition with Venezuela in the region. So they’re, you know, spendingâ€”bringing [incompr.] aid in Peru and in Colombia, making those countries big recipients of Canadian aid was explicitly designed to support the more right-wing sectors in those countries that were, you know, sort of feeling under threat from the leftward socialistic shift in the hemisphere. So the Harper government is right there. It’s not as big a player in this process as Washington, but it’s right there with Washington in terms of supporting those sort of oppositionalâ€”the opposition forces to the leftward shift in Latin America.

JAY: And of course Canada has an enormous amount at stake in Latin America because of its dominant role in global mining and Latin America being one of the major places for extractive industries. So how much does this impact what Canada wants in terms of its foreign policy? And do we see any differences in Harper in that respect?

ENGLER: I think it has a big role. I mean, one of the first things that governments and social movements that challenge neoliberal capitalism tend to do is call for higher royalty rates on natural resources, call for nationalizing of natural resources. So the Harper government, I think, is [incompr.] Canadian business, because it’s by far the biggest player in Latin American natural resources in terms of mining and stuff. They are particularly weary of movements and governments that challenge neoliberal capitalism, because their assets, their profits tend to be some of the first that get impinged upon. And so I think that’s a central role. And Canadian mining companies dominate, I think inâ€”are the biggest player, I think, in every single country in the hemisphere. So there is significant, significant corporate interests that drive this policy.

JAY: Now, has Harper changed anything about Canada’s policy towards Cuba? You would think if there wasâ€”if he was going to be, quote, ideologically consistent in some way, that they would be all over supporting the Cuban opposition. As I saidâ€”you say there’s been some; I take your point, but not much. In fact, Harper seems to not have changed the traditional, relatively friendly attitude towards Cuba.

ENGLER: Yes. That’s one that’sâ€”you know, from an ideological perspective, you would definitely assume a more critical position of the Cuban government, and they haven’t. They’ve actually been quiteâ€”he seems very careful to basically continue status quo policy, which is: say very little about what’s going on in Cuba, while at the same time, obviously, Canadian companies are pretty significant players in Cuba.

And the Conservative government really hasn’t gone out of its way to, you know, criticize human rights violations or a lack of democracy or anything like that in Cuba, which is surprising. I think it’s partly reflective of the business interests in Cuba. It’s also partly reflective of the fact that, you know, 1 millionâ€”I think it’s almost 1 million Canadians that travel to Cuba every year. So there’s lots of sort of warm feeling among Canadians towards Cuba, and there’s a sense that Washington really has been a bully down there, and that Canada taking a different position is something that lots of Canadians are sort of proud of.

So they’ve been very careful on the Cuba file, which I think is an interesting kind of development in there, ’cause they’ve generally been pretty hostile onâ€”or taken pretty sort of pro-empire policies kind of almost everywhere else in the world.