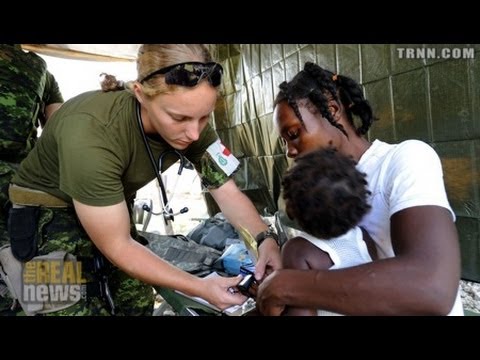 PAUL JAY, SENIOR EDITOR, TRNN: Welcome to The Real News Network. I’m Paul Jay in Baltimore. And we’re continuing our series of interviews with Yves Engler about his book The Ugly Canadian, which is all about Stephen Harper’s foreign policy. And this week we’re going to talk about Haiti. Thanks for joining us, Yves.

YVES ENGLER, AUTHOR AND POLITICAL COMMENTATOR: Thanks for having me.

JAY: So there’s a controversy brewing in Canada as we speak. The minister of international cooperation and trade, I guess his name is Julian Fantino, who used to be the Ontario police commissioner. People may have heard his name on The Real News, ’cause he used to beâ€”he was very involved in the G-20 events that led to the arrests of over 1,000 people. But now he’s a minister in the Harper government. And he announced that CIDA, which is the arm of the Canadian government that gives money away that’s supposed to be used to reduce poverty, he’s saying CIDA needs to work more closely with, facilitate, perhaps even co-invest with Canadian mining companies and energy extraction companies. And Haiti is one of the targets for this. So what is this controversy all about?

ENGLER: Basically, about a year ago CIDA announced a number of projects for Canadian NGOs, like Plan Canada, World Vision, to work with mining companies like Barrick Gold, IAMGOLD, in places like Burkina Faso in Peru. And basically the public aid agency (the Canadian International Development Agency) is putting up millions of dollars for projects whereby the NGO works with the mining company in the local community where the mining company’s operating. And basically it’s a credible financial inducement to NGOs to work with the mining company, because so much, you know, millions of dollars of public money is being made available.

But basically the point of the aid projects is to pacify local opposition to the mining company. And what’s happened in recent days is that Fantino, the minister, has come out and made a couple of public declarations saying very explicitly that this is the new direction for CIDA. These previous projects were announced about a year ago, and there was a fair bit ofâ€”there’s been a fair bit of controversy about them, but now there’s sort of a solidification of that process. And Conservative MPs in the standing committee on international development in the House of Commons have put forward a report saying that they would want to solidify their relationship between the aid agency and the extractiveâ€”Canadian extractive industries.

And so there’s a real controversy around it. There’s all kinds of elements of sort of embarrassment to the minister. He seems very ignorant about most of the issues. He’s been sort of shown to be ignorant by opposition members of Parliament.

But I think it’s a disturbing trend within the Conservative government of, one, further politicizing aid money. There’s been a whole bunch of NGOs that have had their budgets cut over the past years because they were challenging Canadian mining companies abroad, because they were standing up for Palestinian rights. And so there’s been a sense of the real politicization, further politicization of Canadian aid. And this is a new element, to where we’re sort of extending this element to it of really working with the extractive industry.

JAY: So the point here is people are concerned that CIDA money nowâ€”and Haiti isâ€”we’re going to focus on Haitiâ€”is the second-largest recipient of Canadian foreign aid money after Afghanistan, but that in Haiti and places like this, decisions of where CIDA money will go will have to do more with what makes a mining or Canadian extractive industry look good rather than what’s going to be most effective in terms of poverty reduction.

ENGLER: Exactly. I mean, what this is is a very extreme example of it. I’ve said this before or argued this before that basically there’s four purposes of Canadian aid money. This goes back historically and continues today.

The first purpose is a tool of geopolitics. It’s a way of supporting certain political forces in countries that are more amenable to our interests, to, you know, propping up theâ€”let’s say, the right-wing Colombian government in the face of a leftward shift in Latin America, which is one of the things that’s taken place in recent years. It’s been, obviously, used alongside Canadian troops. And if you look where Canadian troops are very active, in places like Afghanistan or, recently, until recently, you know, in Haiti, significant Canadian aid goes there. So the first intent of Canadian aid since its starting in 1950, and continuing today, is as a tool of geopolitics.

The second motivation of Canadian aid is basically to advance Canadian corporate interests, everything from tied aid to what we’re seeing today with advancing the interests of Canadian mining companies in the global south.

And the fourth motivation of Canadian aid is what most people think aid is about, which is about helping the world’s poor. And the recent example with bringing the NGOs and the mining companies together is just a particularly flagrant example of this.

But this is not something new, and the case of Haiti is a particularly clear example of that, where Canadian aidâ€”. Haiti has been the second major recipient of Canadian aid after Afghanistan for basically the last eight years, since Canada participated with the U.S. and France in overthrowing Haiti’s elected government, as well as thousands of other elected officials, back in February 2004. And since that time, Haiti has been a major recipient of Canadian aid. A big chunk of that Canadian aid goes to building up a Haitian police force, which was basically designed to protect the 1 percent in Haiti, the Haitian elite.

So there’s a long history of Haiti being very politicized. It’s just the Conservatives are making it, you know, that much more about advancing corporate and imperial interests.

JAY: Are they making it more in practice? Or are they just being more honest about what they’re doing? It seems to me CIDA’s mostly, or to a large extent, played that role for years.

ENGLER: That is certainly largely true, in the sense that partâ€”one of the things the Liberal government did is they were willing to fund, you know, a few dissident NGOs, right? The Conservatives aren’t willing to fund any dissident NGOs, basically. And basically if you don’t say almost exactly what they want to hear, you simply get your funding cut off.

This example, the recent model, is even more direct, it’s even more flagrant, and if you like, you could say even more honest in the case of the Conservatives as just being, hey, there’s no difference between what the aid agency’s about and what the mining company’s about, and they’ve actuallyâ€”the previous minister, Bev Oda, made a speech in February basically saying that to the Prospectors & Developers Association [incompr.]

JAY: So what are Canadian commercial interests in Haiti? Why is Canada so involved in Haiti?

ENGLER: Canadian mining companies are significant players in Haiti. There’s actually one Canadian mining company, St. GeneviÃ¨ve, that has the prospecting rights for 10 percent of Haitian territory. So there are Canadian mining companies operating there. There’s a majorâ€”the second-biggest employer, until the earthquakeâ€”and I presume it still is the second-biggest employer, but at least it wasn’t till the earthquakeâ€”is Gildan activewear, a Montreal-based blank T-shirt maker, one of the biggest blank T-shirt makers in the world. And they operate a whole bunch of sweatshop kind of production, both directly and indirectly. There areâ€”so, you know, Canadian banking interests of longstanding players in Haiti.

I wouldn’t say that the corporate interests in Haiti are, you know, sufficiently important to explain the Canadian policy in Haiti. I think that a big part of it comes down to the fact that Washington has made it very clear that it wants Ottawa to be a big player in Haiti. And that goes back to the time of the coup d’etat in 2004. And there’s, you know, WikiLeaks documents showing how right when Stephen Harper came to office at the start of 2006, the American ambassador in Ottawa immediately asked thatâ€”the question of Haiti was a high priority for him in his first meeting with Stephen Harper.

So there are some serious corporate interests, but I think it’s more broadly part of Canada’s tie to the U.S. empire.

JAY: The division of labor.

ENGLER: Division of labor. And Canada, one element in that division of labor is the fact that a big chunk of Canada is a, you know, French-speaking place. So there are some sort of added relationships between Quebecâ€”.

ENGLER: Exactly. There’s about 100,000 people from the Haitian diaspora in Montreal. And so there’s relationships there, and there’sâ€”it’s often, you know, Canadianâ€”Quebec officials, really, that areâ€”when we talk about Canadian policy [incompr.] Haiti, it’s really generally Quebec politicians, NGOs, businesses, police, etc., that are operating in Haiti. And the language plays a role, and, you know, longstanding ties even, you know, from the Catholic Church ties that go back decades and decades.

JAY: Are there some positive things coming out of current Canadian poverty reduction investment or policy in Haiti?

And so, you know, lots of Canadian money goes to supporting the UN military force in Haiti. Well, that’s a military force that has been there to basically protect the Haitian elite. It’s the force that’s, you know, brought cholera, that’s been involved in, you know, shooting on demonstrators, all kinds of human rights violations that have come with that UN force. And the Conservative government’s a big proponent of the UN force of Haiti, because it’s seen as advancing Western interests in the country.

So, yes, there are definitely many individual projects, aid projects in Haiti that do have very concrete benefits to many people’s lives.

But the thrust of the policy, even the aid policy, let alone the broader policyâ€”the thrust of the aid policy is spending huge amounts of money on building prisons, on building up the Haitian national police. Canada has been a major player with the Haitian national police since the time of the coup. The early part of that was about bringing in former Haitian military, many of which have terrible human rights records, into the Haitian police force, and basically building up a pro-elite Haitian police force. And the Canadian government has continued that training and continued that role in terms of building that police force. You know, even since the earthquake, the biggest sector of Canadian aid money has gone to refurbishing prisons and building police academies and training the police force.

So it’s certainly a very elite-centric policy in Haiti.