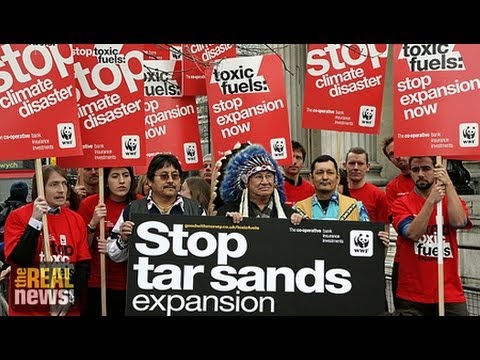 The two Canadian western provinces of Alberta and British Columbia have struck a deal to create a pipeline to get tar sands oil to Canada’s west coast. The issue of tar sands has been hotly contested across the country and has been opposed by Canada’s First Nations communities, as well as environmental groups.

Now joining us to discuss this is Yves Engler. He’s a Canadian commentator and author. His most recent book is The Ugly Canadian: Stephen Harper’s Foreign Policy. And previously he published The Black Book of Canadian Foreign Policy.

NOOR: So, was this a shocker, this deal? Some are saying this is a huge about-face on the part of the British Columbia premier, Christy Clark, that she was saying one thing before she was elected, and now she’s betrayed her campaign promises.

ENGLER: Yeah, I think it’s a betrayal, but it’s not a particularly big surprise, because she received–her party received lots of money from oil interests during the election and she was seen as the more–for those, you know, who paid close attention, seen as the more pro-oil politician.

But the agreement, which, you know, has five different parts of broad parts with regards to ecological issues and First Nations and having the province of B.C. get some compensation, all of it’s left very vague. It probably doesn’t matter, because at the end of the day it’s going to be opposition from First Nations in B.C. that is probably going to scuttle/block this pipeline that the Harper government and the premier of Alberta desperately want.

ENGLER: For sure. This is about building a pipeline that will handle more than 520,000 barrels a day of oil from the tar sands region from around Edmonton to the Pacific coast of B.C. and sort of the northern B.C. or mid range B.C. Kitimat, and to export that oil to–presumably mostly to China. And, you know, it’s a huge amount of money. When the price of oil is as high as it is, it’s a huge amount of money in terms of profits for the tar sands interests right now. Tar sands oil is selling at lower than the international market price because they have so much difficulty getting the product to, you know, open seas and to the international markets. So they’re losing $15, $20 a barrel, there’s a discount of $15 to $20 a barrel on tar sands oil right now. So it’s a huge amount of money that the companies want. And it’s–you know, from a Canadian nationalist perspective, all of the refining jobs and all that stuff is lost to elsewhere.

And, obviously, the biggest question, the question of the expansion of the tar sands and the expansion of the greenhouse gas emissions, the plan–International Energy Agency’s saying that they’re expecting 5.7 million barrels a day of Canadian oil being produced by 2030, most of that coming from the tar sands, most of that being heavy carbon emitting from the in situ production, which is even more carbon-emitting than the traditional production of tar sands. And, you know, this is–from a standpoint for humanity’s ability to live on this planet, this does not bode well for the future. But there is some significant money to be made, so the corporate interests are pushing hard.

NOOR: So it’s probably worth emphasizing that this is one of the dirtiest ways to extract energy on the entire planet, essentially, burning tar sands oil. And so this deal has just been agreed upon. Do you believe it’s possible this can be derailed at some point in the future? Or do you think this is definitely going to go through?

But then there’s the question of unceded land. British Columbia First Nations–this is unceded land, so they have rights. And they have shown very clearly, they’ve shown very strongly and repeatedly–most of the First Nations in B.C. are not supportive of this project. They don’t want this to go through their lands. They’ve said they’ll pursue it–opposition in court, where they’ll try to get the courts to oppose this. And if the courts won’t oppose it and they won’t recognize their treaty rights–or not the treaty rights, but their inherent right to their lands that hasn’t been ceded, then they will oppose it through civil disobedience means and other means. So I would still venture to guess that the Northern Gateway Pipelines will not be successful. The majority of people in British Columbia, polls show very clearly, are opposed to the project.

So this is a battle that’s going to go on for years and years. It’s to be determined which way it goes.