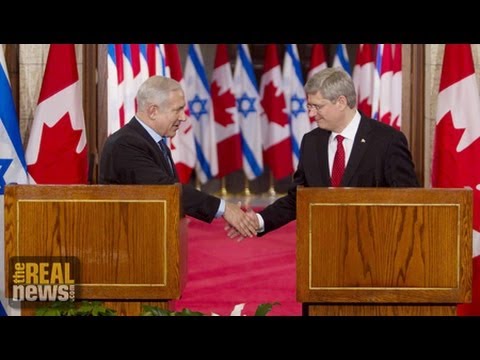 Canadian Prime Minister Stephen Harper has made no secret of his staunch support of Israel. Canadian Foreign Affairs Minister John Baird recently said that he’s, quote, “deeply skeptical” of the recently brokered nuclear deal with Iran. And despite the fact the U.S. is easing some sanctions against Iran, Canadian sanctions will remain in full force.

Now joining us to discuss this is Yves Engler. He’s a Canadian commentator and author. His most recent book is The Ugly Canadian: Stephen Harper’s Foreign Policy. Previously he published The Black Book of Canadian Foreign Policy and Canada and Haiti: Waging War on the Poor Majority.

Thank you so much for joining us again.

NOOR: What can you tell us about Canada’s position? It’s pretty much following Israel’s line [incompr.] as strongly as possible and not even kind of giving this historic moment a chance to work.

ENGLER: Yeah. I mean, this is unprecedented, I think, in the history of Canadian foreign policy where the Canadian government is offside with not only Washington, but London, Paris, even to some extent–and other powers, global powers, in opposing this attempt to bring some sort of a cooldown period. And they’re basically following the position of the Israeli right and the neocon right in the U.S. and are continuing with the belligerence and really, as far as I understand, actually the only country aside from Israel that has come out and been quite strongly critical of this agreement between the major powers and Iran.

ENGLER: Well, I think the conservatives have shown themselves to be very belligerent across the board, from antagonism to the United Nations, climate negotiations, to being ardent supporter of Israel. In basically every situation, the Harper government has come out in favor of Israel, from, you know, Israel’s bombing of Lebanon in 2006 to the bombing of Gaza a couple of years later. And so I think this is in large part, this, an extension of this pro-Israel policy, which was tied into their sort of vision, as Harper put it a couple of days ago to the Jewish national fund fundraiser in Toronto, he referred to Israel as a bulwark against of lightness in a dark region, i.e. that area of the Arab world, the Middle East. So he sees this issue from this very kind of hardline–well, what one you could have called racist, but also sort of Western geostrategic interests. And he’s been a strong proponent of advancing western interests in the Middle East and often, even through a militaristic means.

Alongside that, ironically, they’ve also deepened Canadian ties to the monarchies, particularly with regards to Saudi Arabia, significantly increased Canadian weapons sales to Saudi Arabia. So, of course, Saudi Arabia, after Israel, is probably the most most opposed major player against this agreement. So I think the conservatives have a number of reasons.

They’re also obviously very [incompr.] They want to, you know, replicate a sort of George Bush Republican kind of model in Canada and that’s sort of their political vision.

So I think they have a series of motivations to oppose this and to be critical. But I think most importantly is their strong and complete endorsement and support for Israeli policy.

NOOR: So it would seem that Canada candidate is sort of taking the position that France took, that while Saudi Arabia came out when this deal was signed and said they may reconsider their relationship with the U.S.–now, it is a pretty major relationship, with billions of dollars–tens of billions of dollars in trade agreements between Saudi Arabia and the U.S. So you think that Canada might also be kind of vying for increased market in these Saudi arms weapons market.

ENGLER: Well, for sure. They’ve been very active at a number of different lobbying missions that the federal government has sent to Saudi Arabia and to some of the other monarchies in the region to boost economic ties, specifically weapons. The main export Canada has to Saudi Arabia is light armored vehicles that the Saudi monarchy use to put down the pro-democracy movement in Bahrain. So I think there’s no doubt that Ottawa is close to the Saudi monarchy and has–you know, certainly hears their opinion on this agreement with Iran.

And as I said, the Saudi monarchy sees Iran as a major threat. Iran’s, you know, influence across the region, particularly in Iraq, is something that the Saudis are, I think, quite hostile to.

So all the rhetoric that the Conservatives put out in the–and the recent days put out a–the foreign affairs minister a couple of days ago put out a statement sort of talking about human rights and we can’t forget about human rights in Iran. And there’s no doubt there’s lots of, you know, human rights issues in Iran. But if you compare human rights situation in Iran, you compare the plight of women in Iran to the situation in Saudi Arabia, Iran looks like a bastion of democracy and looks like a bastion of feminism. So the hypocrisy and the double standards are really clear when you look at their ties to Saudi Arabia.

This is not–the Conservatives’ hostility to Iran is not about any human rights question. It’s about Iran not following the orders of the empire and being seen as a threat to Israel’s and Washington’s control of the region.

NOOR: Now, some commentators have looked at Israel’s approach, its complete rejectionist approach to this deal, and it’s not that far from its previous positions, really. But now Israel seems so at odds with the rest of the international community that Israel might lose some of its influence in the future of the Middle East even. And that may be a bit of a–it remains to be seen if that will be true. But do you think with Canada adopting Israel’s position that Canada too may end up losing some standing in the international community? And what has the response been in Canada itself?

ENGLER: There’s no doubt. I mean, I’ve received some calls from international media outlets on this question of, you know, Canada stands out as alongside Israel. It’s really the only country that’s publicly criticized them. Even Saudi Arabia, after the agreement came out, their comment was–you know, while we know that behind the scenes they’re critical publicly, they’re saying–sort of basically going along with it. So there is definitely international interest in Canada’s position.

And so I think it does–it definitely does harm Canada’s standing globally. Once again, just like a number of climate negotiation meetings and different arms control meetings, the current Conservative government is seen as, you know, offside with international opinion. It’s really defending the most reactionary kind of position.

And so that comes back internally. And there’s been quite a bit of commentary from sort of liberal-minded media people sort of criticizing the Conservative government’s position. But they’re not–most of that criticism doesn’t go very far. I mean, this is just the latest in longstanding campaign the Canadian government has had against Iran, what I call low-level war against Iran that’s included the sanctions, which was designed to, you know, harm Iran’s economy. It’s included Canadian naval vessels patrolling off the course of Iran, Canadian troops being–occupying Afghanistan. And there’s some sense of their involvement in spying and sort of, you know, keeping track of Iran, you know, a whole series of, you know, funding groups, opposition groups in Iran and on and on and on.

So there has been some mild criticism of the recent comments of the Harper government, but there hasn’t been much that’s gone sort of deeper saying why do we have a right to tell Iran not to build a nuclear weapon while we, you know, support our ally’s nuclear weapons program. There’s been very little in terms of a more thorough critique of the Conservatives’ policy vis-à-vis Iran.

NOOR: Thanks so much for joining us.

NOOR: You can follow us on Twitter @therealnews, Tweet me questions and story ideas @jaisalnoor. We’ll also be posting questions for our viewers there as well.