Canada and EU to Ink Largest Trade Agreement since NAFTA 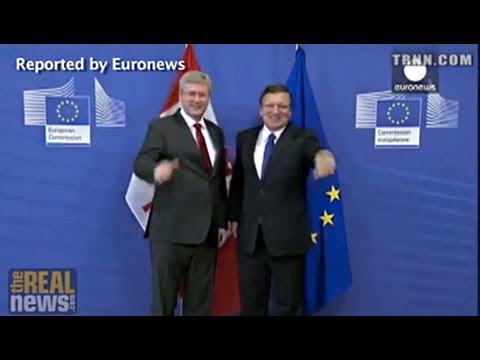 Last Week, the E.U. and Canada came to a tentative agreement over the Comprehensive Economic and Trade Agreement, or CETA. When passed, it’ll be Canada’s largest bilateral trade agreement since NAFTA. It will impact everything from pharmaceuticals to mining operations. Details of CETA have not been released to the public, but it’s received broad support from Canada’s political and media elites.

Now joining us to discuss this is Yves Engler. Yves is a Canadian commentator and author. His most recent book is The Ugly Canadian: Stephen Harper’s Foreign Policy.

NOOR: So, Yves, as you know, the details have not been made public, the details of CETA have not been disclosed to the public. But from what we know, can you give us a quick summary? And what are the most troubling aspects for you?

ENGLER: Yeah. I mean, this is a significant economic and trade accord, what some are calling next-generation trade accord, that will eliminate most tariffs. I think it’s [incompr.] 98 percent of all tariffs going both ways between Canada and the European Union.

The proponents are claiming huge numbers of jobs will be created, a huge boost to the GDP of Canada. And, obviously, the European Union’s a bigger market, so a slightly lesser GDP boost there.

But I think a lot of this is actually–has been overstated. And there’s many elements of the CETA accord that are very troubling, for instance the fact that Canada will be extending its patents by about two years on pharmaceutical drugs, which will increase already high drug costs and make them even higher, to sort of pad the pockets of the big pharmaceutical companies; public procurement, so the contracts by provincial agencies, municipalities, is being opened up to a greater–giving greater rights to multinational corporations based in Europe to bid on contracts from Hydro-Québec or different public municipalities, which will undermine the ability of governments to follow buy-local initiatives, to have ecological policies in terms of, you know, reducing the amount of carbon emissions in the transport of goods that are purchased by public agencies; also the possibility that this could lead to a further privatization of public services in terms of locking in public-private partnerships in municipal water distribution.

And, similar to NAFTA, the CETA accord, according to the leaks, will include a investor-state arbitration process, whereby Canadian companies and European Union companies can sue each other’s governments if they feel that public policy has impeded their profit-making potential. And this is a complete attack against the court system, the current court systems, and it just gives a special power to corporations to protect their rights, which I think is, you know, a total affront to any sense of democracy.

NOOR: Now, you made a couple of points there that I want to follow up with you on. Can you talk more about the impacts CETA may have on Canada’s environmental policy, especially when it comes to energy extraction?

ENGLER: Yeah. Well, CETA will–it locks in a sort of model of development in Canada. Right now, basically there’s a trade imbalance between Canada and the European Union, where there’s about a $15 billion to $20 billion trade advantage for Europe to Canada. And mostly Europe exports higher-tech kind of goods, whereas Canada exports natural resources and different commodities. And so what CETA’s going to do will sort of further exacerbate that dynamic and make Canada even more a–make Canada’s economy even more based upon natural resource extraction. So that’s sort of at the macro level.

More specifically, CETA increases the threshold at which foreign takeovers of Canadian companies are reviewed by the government, up to $1.5 billion, meaning that if a European energy company was to buy a Canadian company operating in the tar sands, the threshold at which the government looks at that takeover has increased. So smaller takeovers won’t be reviewed by the government, which obviously sort of leads towards more investment by European countries in the tar sands.

Also, it enables European workers, exchanges between bringing in workers from Europe into Canada, which has already been stated as something that will be particularly focused on Alberta, whether it’s–is a dearth of skills in some areas in the tar sands. And so there’s already a number of articles that have discussed that this will enable bringing in different European workers into Canada to work in the tar sands.

And also, as I mentioned, the whole investment dispute process will enhance the power of multinational corporations to sue the Canadian government if they pursue policies that impede upon the profit-making, so that, you know, if there was policies that went against different investments–you know, Total, the French energy company, went against their investments in Alberta’s tar sands, potentially Total could pursue the Canadian government in these investor tribunals for impeding on their profit-making.

So all this will sort of further lock in this model of development that’s focused on extraction. And obviously the Harper government is a strong proponent of this extractivist model. And so many different policies they’ve pursued, from eliminating restrictions on, you know, different waterways and rivers and stuff in this country from environmental oversight to, you know, their opposition to the Kyoto climate accord, they’re very much wedded to this model of extraction. And I think CETA will just further exacerbate this direction of development.

NOOR: And finally, Yves, you know, it’s reported that the CETA might be two years away from final approval. Are activists going to seize on this approval process and try to push for some concessions, especially when it comes to the increased power of corporations this accord will give?

ENGLER: Yeah, I mean, I think there is a possibility. So far, the dominant media has been almost entirely supportive. The business community has come out very strongly. The business community in Canada is completely tied to this model of neoliberal capitalism. And the political parties for the most part have supported–across the political spectrum, have come out broadly in support of the agreement.

But there is a groundswell. There’s many different activist groups, groups like the Council of Canadians, unions that have been opposing the accord. And there’s a serious possibility. And there’s a lot of–I think, a lot of public opinion that’s not particularly sympathetic to the agreement.

Also, there’s questions about the European Union. There’s 27 different countries that have to ratify it. The left parties in Europe have already said they oppose agreements that include investor-state provisions where companies can sue in private tribunals. So there is a possibility.

But it’s also just important–even if the CETA itself won’t be scuttled or isn’t scuttled, it’s also important to rebuild this movement that grew in the late 1990s, early 2000s, that scuttled, you know, the Free Trade Area of the Americas and impacted the World Trade Organization and the MAI, the Multilateral Agreement on Investment. And so, you know, it’s important that rekindle this movement that challenges this move towards expanded rights for multinational corporations, which is, you know, to the detriment of working people, to the environment, indigenous communities, etc.

NOOR: Yves Engler, thank you so much for joining us.