Canada’s Increased Military Budget Will Fuel the US War Machine

Boosting Canada's military spending is "a way of enhancing the American empire... done under the guise of lessening Canadian dependence on the U.S.," says author and activist Yves Engler

Boosting Canada's military spending is "a way of enhancing the American empire... done under the guise of lessening Canadian dependence on the U.S.," says author and activist Yves Engler 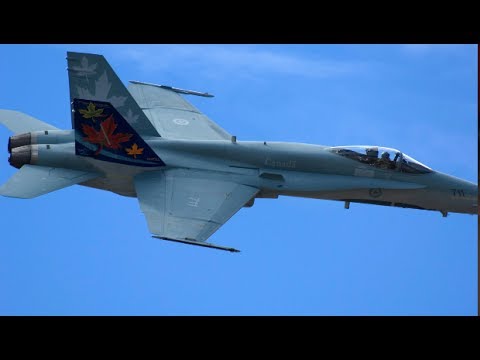 DIMITRI LASCARIS: This is Dimitri Lascaris reporting for The Real News from the People’s Summit in Chicago, Illinois. Several days ago, Canada’s Trudeau government announced a greater than 70% increase in military spending over the next decade, amounting to approximately $30 billion. According to the government, this will increase Canada’s military spending from 1.2% of GDP to 1.4%. These tens of billions of dollars will be used to add 5,000 regular and reserve personnel to the Canadian Armed Forces, buy a bigger than expected fleet of 88 new fighter jets, and pay for the expanding cost of 15 war ships. Notably, the money will also be used to purchase armed drones.

Now here to discuss this with us is Yves Engler, who’s joining us from Montreal, Canada. Yves is an activist and author. He’s published eight books, including Canada in Africa: 300 Years of Aid and Exploitation, The Ugly Canadian: Stephen Harper’s Foreign Policy, and The Black Book of Canadian Foreign Policy. Yves’ most recent book is A Propaganda System: How Canada’s Government, Corporations, Media, and Academia Sell War and Exploitation. Thanks for joining us, Yves.

DIMITRI LASCARIS: Yves, before we begin to delve into the announcement and its rationale, I’d like to just visit briefly the announcement by Defense Minster Harjit Singh [Sajjan] of the increase. This is some of what he had to say.

HARJIT SINGH SAJJAN: Today we set a new course. Reversing a pattern of decline, this new policy will see annual cash funding for defense increased by more than 70% in 10 years. It will grow from $18.9 billion in 2016-17 to $32.7 billion in 2026-27. Drawn, secure, engage is the most rigorously costed and fully and transparently funded defense policy ever produced in Canada. For the first time, national defense and the Canadian Armed Forces will have a 20-year funding commitment. This is laid out black and white today. This transparency will enable long-term planning and effective management of public funds more than ever before. We are also simplifying the structure of the defense budget so that Parliament and the Canadian public will be able to hold governments accountable for defense spending in the years ahead.

DIMITRI LASCARIS: Now, the day before Minister Singh’s announcement, Canada’s Foreign Minister offered a rationale for a dramatic increase in military spending. Let’s listen to a bit of what she had to say.

CHRYSTIA FREELAND: Canada’s geography has meant that we have always been able to count on American self-interest to provide a protective umbrella beneath which we have found indirect shelter. Some think, some even say, we should therefore free ride on U.S. military power. Why invest billions to maintain a capable, professional, well-funded, and well-equipped Canadian military? The answer is obvious. To rely solely on the U.S. security umbrella would make us a client state. And although we have an incredibly good relationship with our American friends and neighbors, such dependence would not be in Canada’s interest.

YVES ENGLER: No. I mean, it’s incredibly ironic, hypocritical, if you like, that the Trudeau government is saying basically, on one hand, “We are uncomfortable with the direction Trump is going because he’s pulling out of Paris Climate Accord, and we want to develop sort of some greater independence,” and then simultaneously massively increase the military spending, which is one of the main things that Trump has been pushing for, which is increasing NATO military spending to the so-called 2% of GDP. So basically, the Foreign Minister’s statement was preparing the way to sort of ideologically to justify this military spending, but in a way that is completely divorced from the facts of Canadian foreign policy, completely divorced from the fact that Canada’s totally tied in with American military machine, completely divorced from the fact that Canadian foreign policy, as you mentioned, is totally tied in with US foreign policy.

YVES ENGLER: Of course not, and the whole term “defense” is ridiculous. This is offensive. I mean, even if you look at some of the things that they announced in the military spending increase, well, one of the things they announced was that Canada will buy armed drones. Those are clearly designed to be involved in foreign wars and to bomb other countries, weaker countries. Also they announced a increase in Canadian special forces, more than 600 new special forces. Well, Canadian special forces have been on the ground in Colombia in the early 2000s, in Haiti at the 2004 coup alongside the US and France, when they overthrew the elected governor of Haiti in 2004. On the ground right now in Iraq, this is not defensive.

These are the highly secretive special forces, so they give very little information. And the idea that the Trudeau government’s all about transparency, one of the military things they do is really increase the special forces. The whole point of the special forces is that they’re secretive. The government can deploy them, and we don’t know where they’re deployed. We hear little tidbits of information that come out, but we’re never confirmed.

The other part of the military spending increase is, they stated explicitly, offensive cyberattack capacity. It’s increasing the Canadian military’s capacity to be engaged in offensive cyberattacks. Also increasing the number of fighter jets. Maintaining the 15 naval vessels that is gonna cost over $60 billion. The spending increases are designed to increase Canada’s capacity to exert military power elsewhere. This is not about defense whatsoever, and you can go through from the Korean War in early 1950s, that Canada was part of, 27,000 Canadian troops, to bombing Iraq in the early ’90s, to the form Yugoslavia, late ’90s, to Afghanistan through the 2000s, through Libya, 2011, Iraq, Syria, more recently. These have always been offensive. The idea, again, that the term “defense” really holds no weight.

DIMITRI LASCARIS: Now, one of Canada’s largest newspapers, the Globe and Mail, just published an editorial in which its editors complained about the purported modesty of this increase, and I wanna read to you a part of that editorial. It stated, “Defense Minister Harjit Singh unveiled his long-awaited review of defense policy. The spin around it is finally spun, but beneath the liberal government’s new military clothing is exceedingly modest.” Now, in your book, A Propaganda System, you explain how Canada’s Ministry of Defense, its politicians, and its corporate media promote war. To your knowledge, is any major media outlet or any major political party in this country arguing that we should be spending less on defense or so-called defense, rather than more?

YVES ENGLER: No. No. I mean, the point of the book is to lay out the number of difference or the institutional basis for Canadian foreign policy and justifying the sorta imperialistic, militaristic Canadian foreign policy. And there are a number of institutes, think tanks, in this country set up by military, set up by arms companies or funded by arms companies. They are major voices in the dominant media. You already have a dominant media that’s owned by major corporations that receives much of its budget from advertisers, which are other major corporations. There is basically an agreement in the intellectual sphere, in the media sphere, even in much of the academic sphere, that we need to be “pulling our weight” in international affairs, is one of the terms they use.

And that goes right into the NDP. The social democratic left party has been at the budget. In March, Thomas Mulcair, the head of the NDP, was criticizing the Trudeau government for not putting more money into military spending and saying that our air force and naval capacities are weakening. They, obviously, again, they would kinda frame that in a sorta defense way, but ignoring the history of what naval capacity and air force capacity have been used to employ. Even Green Party leader Elizabeth May came out in favor of the Naval Procurement Program, which was initially costed at $26 billion, is now being costed at more than $60 billion of investment in top-of-the-line naval vessels.

So the political realm, the think tank realm, and the dominant media realm are all basically in agreement that Canada should be spending more on military affairs. But when you actually look at public opinion polls of most Canadians, you find that defense spending, so-called defense spending, is at the bottom of the list of priorities. Consistently, people want money put into Medicare, put money into Pharmacare, building the Pharmacare program, and daycare programs, education, transitioning away from fossil fuels. Spending on the military is always right at the bottom of the list.

So the whole political realm in this country is behind military spending, even when the population is not. And the environment and social reality and our world, it’s clearly calling for less military spending.

DIMITRI LASCARIS: And remarkably, as you said, even the leader of the Green Party, one of whose six core values is non-violence, is advocating for increases in certain aspects of military spending. I think that really speaks to the depth of the political establishment’s commitment to the military machine. Nonetheless though, thank you very much for joining us, Yves.

DIMITRI LASCARIS: We’ll be exploring Canada’s foreign policy and military endeavors in the future with you, I’m sure.

DIMITRI LASCARIS: And this is Dimitri Lascaris, reporting from the People’s Summit in Chicago for The Real News.