Robert Naiman: US is on a policy collision course in Yemen as it publicly supports democracy but covertly administers drone strikes

Robert Naiman: US is on a policy collision course in Yemen as it publicly supports democracy but covertly administers drone strikes 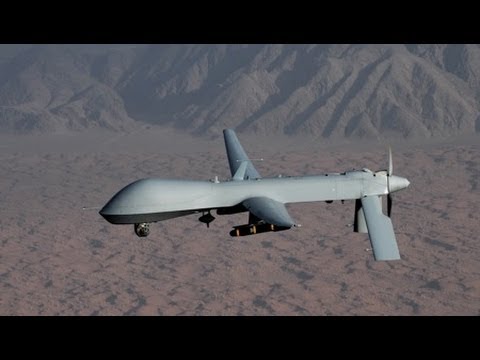 The United States and U.K. have ordered all of their embassy staff to evacuate Yemen. This was following a likely U.S. drone strike which killed four alleged al-Qaeda terrorists. The drone strikes on Tuesday were the fourth strikes in two weeks. According to at least one local journalist, a U.S. drone strike on August 1 killed four civilians, including a child.

Here to discuss all this is Robert Naiman. Robert is the policy director at Just Foreign Policy, and he writes on U.S. foreign policy for Huffington Post, Truthout, Al Jazeera English, and other publications. Thanks for being with us, Robert.

NAIMAN: Well, those are great questions. You know, it’s still the case, even after President Obama made his speech at National Defense University, where he was understood to pledge to bring the war on terror within the rule of law, where he pledged to be more transparent about the drone strike policy, where he pledged that no drone strike would be conducted unless it was virtually certain that there would be no civilian casualties, it’s still the case that U.S. officials refuse to comment publicly for the record acknowledging particular drone strikes, answer questions about particular drone strikes. So we still don’t have the transparency that was promised.

What is the policy in Yemen? Again, that’s a good question which is hard to nail down precise answers to. Remember, this is a covert action, quote-unquote covert action. So that means that–obviously it’s not really a secret, because we know that it’s happening. It means that U.S. officials generally don’t discuss it publicly on the record, saying that it’s a classified CIA operation. That was supposed to change, again, after President Obama’s NDU speech, particularly in Yemen. The drone strikes were supposed to be transferred from the CIA to the military and become more transparent. That hasn’t happened yet.

So, for example, one of the most controversial aspects of the drone strike policy is the use of so-called signature strikes, where, you know, the official story is, we’re just going after top-level terrorist leaders, you know, guys we need, bad guys. We know who they are. They’re plotting against the United States, plotting to hurt Americans. That’s the official public story. Well, in fact, you know, press have reported that there’s this whole other kind of strike, so-called signature strike, where they don’t know who they’re targeting. Signature means they’re inferring who they think the person is from signals intelligence and human intelligence. They have an intelligence signature that indicates that they are engaged in terrorist-like behavior.

We met, when I was on a delegation recently to Yemen, with the U.S. ambassador. We asked him about this implicit promise. And many people understood that signature strikes were going to end. And he said, Ambassador Feierstein, we don’t do signature strikes in Yemen. That’s something that happened in Pakistan. In Yemen, we know every single person that we’re targeting. We know who they are. Well, everybody that I reported this–everybody I told, Yemenis, Western journalists, they laughed. That’s ridiculous. This is something that was reported in Western press. That shows you the disconnect between what Obama administration officials are saying and what independent press is reporting.

DESVARIEUX: What we do know is that the Obama administration ordered for their entire staff in Yemen to evacuate. And already there’s been a firing down of a Yemeni military helicopter that killed eight people on board. And apparently this military helicopter was safeguarding oil installations. Can you talk to us a little bit about whether or not the U.S. policy in Yemen has anything to do with oil? And also, does the U.S. drone policy actually increase the likelihood of more terrorist actions down the road?

NAIMAN: Well, first of all, about oil, you know, ultimately oil is the backdrop of all U.S. policy in the Middle East. So all U.S. policy in the Middle East relates to oil. Even if in a particular case, you know, you can’t explain a particular U.S. action in light of oil, the whole posture of the U.S. in the region for the last 50 years, since the Second World War, revolves around oil, revolves around the fact that Saudi Arabia in particular is a huge oil producer and is regarded by the U.S. as a strategic prize, not about putting gas in our fuel tanks in the United States; about controlling what’s considered to be strategic asset in terms of geopolitics. It’s about our relationship with–U.S. relationship with Europe and Asia, because that’s where most of that oil is being exported. It’s not about our cars; it’s about U.S. geopolitical strategy and control of this strategic prize.

Yemen is not a significant oil producer. It’s a poor country. But it lies athwart, as they say, a strategic waterway through which–the straits of Aden, through which a large part of the international oil traffic flows, and in the adjoined Saudi Arabia, which is the real prize. And the two countries influence each other. There’s a lot of–you know, there’s culture in common. There are tribes in common. Al-Qaeda guys who were expelled from Saudi Arabia took up residence in Yemen. It’s sort of the base of operations for them. So all these things are related.

DESVARIEUX: Okay. And also we have that President Obama came out earlier this year saying that drone strikes are legal. But then there is a U.S.-sponsored initiative called Yemen’s National Dialogue Conference, and they voted to criminalize drone strikes. Do you see these drone strikes undermining the legitimacy of U.S. policy in Yemen?

NAIMAN: Well, first of all, this question of whether drone strikes are legal is something that should be interrogated. You know, the United States, everybody acknowledges that the United States has a war in Afghanistan. Whatever one thinks of it, it is generally recognized to be a legal war, a declared war, officially declared war. It doesn’t mean that it’s a good thing. It doesn’t mean that every single act within it is legal. Illegal actions happen in legal wars. But the war itself is internationally recognized as a legal war.

The United States is not internationally recognized to be conducting a legal war in Yemen, Pakistan, and Somalia. Congress passed an authorization in 2001, the Authorization for Use of Military Force, which preceded the U.S. military entry into Afghanistan. Both the Bush and the Obama administrations claim that this authorization gives them authority to conduct military actions all over the world, including in Yemen and Pakistan and Somalia. But that is highly contested around the world and in the United States.

Is it counterproductive? Many people think so. Many people, including, like, you know–the former U.S. ambassador to Yemen signed a letter along with a bunch of other policy experts in the Obama administration saying this policy has become counterproductive in Yemen, this drone strike policy has become counterproductive in Yemen. It’s undermining long-term goals, turning people in Yemen against the United States. Other experts have said the same thing about U.S. policies in Pakistan. Whatever one thought about this in the past, this policy has become counterproductive to U.S. interests by undermining the relationship between, in this case, the Yemeni government, the Pakistani government undermining the legitimacy of the Yemeni government in the eyes of many Yemenis. This is seen as facilitating these U.S. drone strikes which kill civilians, are perceived by many Yemenis as to violate the Yemeni sovereignty, even though they’re approved, drone strikes are approved by the government of Yemen. This is a very controversial policy in Yemen, widely hated across the political spectrum.

The National Dialogue Conference in Yemen is like a constitutional convention. It includes every political party, includes a broad cross-section of Yemenis society, youth groups that participated in the uprising against Saleh, independent women’s groups. This body passed a proposal criminalizing extrajudicial institutions in Yemen, including drone strikes. And it was supported even by representatives of Yemen’s ruling party, who are participating in the national conference. That tells you how controversial these drone strikes are in Yemen.

Now, this proposal doesn’t go into effect immediately, but the government of Yemen is, under the agreement that established the National Dialogue Conference, obligated ultimately to put this in place. So we see there is a collision course. You know, the National Dialogue Process in Yemen is supported by the United States and funded by the United States. It is supported by a UN Security Council resolution backed by the United States. So two parts of U.S. policy are crashing into each other. We have a U.S. policy which is supposed to be supporting democracy in Yemen and supporting the ability of–the capacity of the Yemeni government to be responsible for security in the whole country, and the same time we have a U.S. policy of the drone strike that runs completely counter to that.

DESVARIEUX: Okay. Thanks so much for joining us, Robert.