Without an Israeli approved ID card, Palestinians cannot cross into Gaza which according to Human Rights Watch has separated families, caused people to lose jobs and educational opportunities, barred people from entering the Palestinian territories, and trapped others inside them.

Without an Israeli approved ID card, Palestinians cannot cross into Gaza which according to Human Rights Watch has separated families, caused people to lose jobs and educational opportunities, barred people from entering the Palestinian territories, and trapped others inside them. 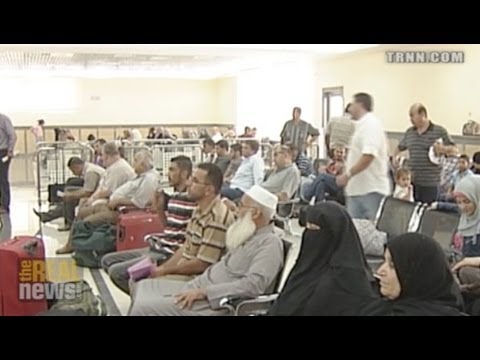 Yousef Al-Helou: Palestinians have been living in a state of limbo since the 1967 war, and even before 1948, the year when Israel was created on the land of historic Palestine, after forcing its indigenous population to leave to neighboring counties and elsewhere throughout the world, which made them become refugees and stateless dreaming of their right of return.

Since 1967, when Israel occupied the Gaza strip and the West Bank, it has been in control of the Palestinian population registry and all important cards required to enter Gaza and the West Bank.

This system was designed to control and monitor the movement of all Palestinians and to curb the Palestinian population by denying their Diaspora the right to come home even if for a short visit.

The Real News talked to Samah Sabawi, a Palestinian writer from Australia who managed to enter Gaza to visit her family for the first time in 17 years and after 7 hours of waiting at the Rafah crossing.

It is virtually impossible for many cases for the majority of Palestinians like Samah who are actually from Gaza Â and who were forced to leave after 1967 to actually come back for a visit because they do not carry the Palestinian ID or what is known among Palestinians Â as “Haweyyah”.

Samah Sabawi, Palestinian Writer: There is great power in controlling the birth registry and the population registry .

When you are a nation defines yourself Â by a specific ethnic character Â which is the Jewish character, you want to know how many non Jews are being born within your area of control, you want be able to control this population. So it is a great measurement of controlling not only the exit and entry and movement of the population but also to implement a kind of segregation, so you have people from the west bank who can not come to Gaza because they are confined by their ID’s, and you got people from Gaza who dream of coming to the West bank for the same reason, but above the fragmentation and the implementation of this fragmentation by the Israeli authority, Â you got also the power to curb the Palestinian population

Al-Helou: The Rafah crossing is Gaza’s only gate that bypasses Israel and controlled by Egypt but only Palestinians with Israeli approved ID cards can use this crossing. Those who do not have ID’s or what is known as Palestinian National Number Card Â issued by Israeli interior ministry and wish to visit Gaza have to coordinate their visit with Egyptian authorities. In case their attempts failed, the alternative is to use underground tunnels between Gaza and Egypt.

Islam Shahwan, Spokesperson of Gaza interior ministry: We have over 200,000 Palestinians registered in our database and who are living outside Gaza and do not have Palestinian ID’s issued by Israeli authorities, they have applied for family unification, registration and residency this issue was stopped by Israeli authorities Â some years ago. These people have either Egyptian or Lebanese or other travel documents and want to visit or live in Gaza, we have overcome this problem by coordinating this matter with Egyptian authorities by granting them identification cards issued from the Palestinian ministry of interior in Gaza.

Al-Helou: With Israel controlling the Palestinian registry, the whole picture and the whole analysis becomes very clear, it is controlling every aspect of the lives of Palestinians from the moments they are born.

This is one of the general civil affairs offices, Gaza residents come to such offices to issue new birth certificates for their new babies, or to issue passports or even to renew the old passports.

Asad Abu Sharekh, Al-Azhar University: This is not violation against our sovereignty , this is violation of international humanitarian law , Israel is in total control of this registry, simply it wants to be in control of everything in Palestine, so that Israel is practicing an ethnic cleansing policy. Whenever Israel knows there is growth in population, it uses new strategy in order to de-Palestiniaze, de-arabize, and depopulate Palestine and to use this ethnic cleansing and it has has been doing that ever since 1967.

Al-Helou: Meanwhile, Human Rights Watch said in its report, that the way Israelâ€™s military has exercised its control over the Palestinian population registry â€“ the list of Palestinians whom it considers to be lawful residents of the West Bank and Gaza territories â€“ has separated families, caused people to lose jobs and educational opportunities, barred people from entering the Palestinian territories, and trapped others inside them.