As a new study finds most Americans want fundamental change in the US healthcare system, Wendall Potter discusses what concrete steps could improve it.

As a new study finds most Americans want fundamental change in the US healthcare system, Wendall Potter discusses what concrete steps could improve it. 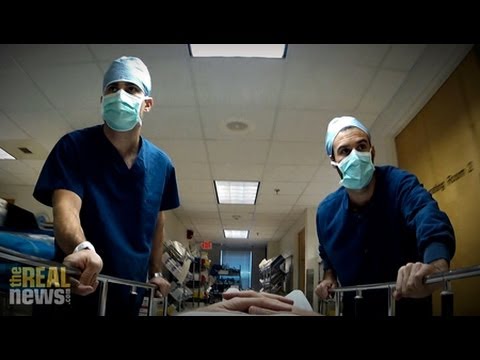 We’re joined by Wendell Potter. He’s a senior analyst for the Center for Public Integrity. In 2010, he authored the book Deadly Spin: An Insurance Company Insider Speaks Out on How Corporate PR Is Killing Health Care and Deceiving Americans.

So, Wendell, there’s a new study out by the Commonwealth Fund that finds while Americans spend the most on health care out of the 11 Western countries surveyed, they get some of the worst coverage, the worst treatment, and a vast majority of U.S. adults want fundamental change in our health care system. If you were America’s health care czar and you could pick and choose how our health care system was built from scratch, you could take part of the American system, parts of the Canadian system, the French, Australian, whatever you wanted to do, talk about how you would build this system and what kind of care it would offer for the American people.

If I were able to build a health care system, if I were czar, I would do what Congress and the White House should have done at the very beginning of our health care reform debate, and that is to look at what other countries have done, why are their results better than ours, and really study that, and then take a look at what we could borrow from those systems, and certainly also what to preserve in our existing system.

I don’t think there’d be any argument that we have some of the best doctors and hospitals in the world. The problem, of course, is that we have limited access. Growing [inaud.] hospitals and doctors because they’re uninsured or underinsured. We have almost 50 million Americans, or we have had in the past, who don’t have insurance, and another 30 million who are underinsured. And that is one of the reasons why quality of care or outcomes are so bad compared to other countries.

We need to have universal coverage, which every other industrialized or developed country has been able to achieve. We’re the last one. We’re working toward that with the Affordable Care Act.

What we need to do is maybe borrow more from the French system and other systems, because the results are usually among the best in the world. It’s often cited as a best system. And it wouldn’t be as challenging as it would be to import or replicate the Canadian system, which is a straight single-payer system. In the French system, there are competing insurance companies, so people do have a choice of insurers, but they all operate on a nonprofit basis and they all compete largely on service. And that would be a significant change. So I think we need to look at what the other countries do best, why are there outcomes better than ours, and then build a system that would really work for the United States.

NOOR: And could you give us some more examples? You know, for–I know one of the categories where the U.S. lags far behind, and I think only Canada is close, is access to a primary care physician. Like, for example, I was just in a pretty serious car crash, and I have to wait 12 days to see my doctor. So I had to go to the ER, which is going to cost, like, hundreds of dollars. Can you give us some specific, concrete examples of what things you would change?

POTTER: Yeah, and that’s a very, very good point. And one of the reasons why outcomes are better in other countries is because people do have access to primary care much more than we do.

Our medical schools are a problem here and the whole way that our medical profession is set up rewards specialists and not primary care. Going to medical school is very, very expensive these days, and more and more students realize where they make the decision that to make money to pay off student loans, they pretty much have to specialize in a specialty care area where their incomes will be higher. So fewer and fewer are opting to be primary care physicians. We have a growing shortage of primary care doctors. And we need to have more of them, so we need to have a means in which more students are enticed into primary care so that they can be assured of paying off their loans. But also we may need to look at having more nurse practitioners, as more countries do. We need to have more people going to primary care rather than to expensive specialists. That’s one of the reasons why we we have such an expensive health care system.

NOOR: And how much is preventative care? How much will that–if that’s something the American system doesn’t really emphasize, how can a focus on preventative care help keep costs down overall?

POTTER: Well, if we have a focus, a true focus on preventive care, it should keep costs down in the long run, because if you are going to a doctor, if you’re going to your primary care doctor or your nurse practictioner on a regular basis, you can usually be treated and not have, maybe, a minor illness develop into something more serious. And so it can help in reducing the overall cost of major surgeries down the road, for example.

And it can just lead to a healthier workforce. That’s one of the things that employers certainly support. We have a lot of absenteeism from school and from work because people are just not taking good care of themselves. They don’t–there has not been emphasis on preventive care. And, in fact, health insurance plans in the past have not really paid for it. They’ve been focused on getting you well, then keeping you from getting sick in the first place.

NOOR: So, Wendell, more than a third of U.S. adults went without recommended care or did not see a doctor when sick or failed to fill prescriptions in the U.S., compared to as few as 4 to 6 percent in the U.K. and Sweden. Again, I’m citing the new study out by the Commonwealth Fund.

POTTER: It’s a big problem and one that’s been with us for some time. And there are several reasons for that. One is because so many of us are uninsured or underinsured in this country and we don’t have the financial means to be able to go to the doctor or even get prescription medications like people in other countries do. When you have one out of every six citizens who are uninsured, that makes a big difference.

The other is a practice that’s been going on in the insurance industry now for several years of moving more and more people, if they have insurance, into high-deductible plans. That’s a problem as well, too, because people who are in high-deductible plans often don’t have the money to pay out of their own pockets even a doctor visit or going to see–or picking up their medications at the drugstore. That’s a big problem. And we’re seeing right now the evidence of that. People who are in these plans, studies are showing, often forgo needed care. Yes, it will cut down on the usage of care, but in many cases people [aren’t] going to the doctor or getting their medications when they really should. And that, unfortunately, will lead to even higher costs down the road.

NOOR: Wendell Potter, thank you so much for joining us. And we’ll certainly continue this discussion.

Wendell Potter is a journalist and former health insurance executive. His books include the New York Times bestseller “Deadly Spin, An Insurance Company Insider Speaks Out on How Corporate PR Is Killing Health Care and Deceiving Americans,” and “Nation on the Take: How Big Money Corrupts Our Democracy and What We Can Do About It.”…

April 1, 2020
Sign Up for Our Newsletter
Help Us Make Real News!