Bernie vs. Hillary on Healthcare: What’s In It for Us?

Former CIGNA executive-turned-whistleblower Wendell Potter says Bernie Sanders plan is aspirational and the dream of Democrats, but neither his nor Clinton's plan would succeed unless there are significant changes in both houses of congress

Former CIGNA executive-turned-whistleblower Wendell Potter says Bernie Sanders plan is aspirational and the dream of Democrats, but neither his nor Clinton's plan would succeed unless there are significant changes in both houses of congress 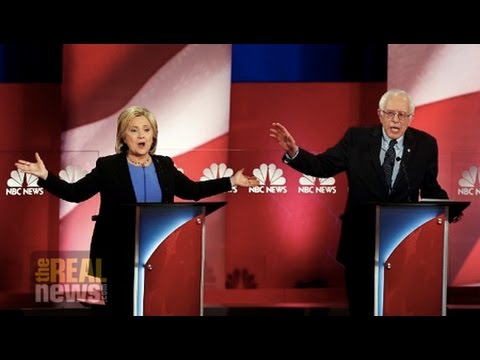 On Sunday, January 17, the Democratic National Committee hosted their fourth debate in South Carolina. Healthcare policy was among the topics discussed. Embracing the legacy of Obamacare, candidate Hillary Clinton accused Bernie Sanders of attempting to undo President Obama’s signature piece of legislation. Hillary Clinton said she was going to build on Obamacare. Bernie Sanders, who released his plan for healthcare on Sunday evening, just prior to the debate, said he considers healthcare a human right, and wanted to pursue a universal healthcare plan similar to Medicare, but for all. Let’s have a look at a bit of the debate.

HILLARY CLINTON: But to tear it up and start over again, pushing our country back into that kind of a contentious debate, I think is the wrong direction.

PERIES: Now to discuss Hillary Clinton’s policy on healthcare is Wendell Potter. Wendell Potter is the author of Obamacare: What Is In It for Me? He’s a senior analyst at the Center for Public Integrity, and in 2010 he authored the book Deadly Spin: An Insurance Insider Speaks Out on How Corporate PR Is Killing Healthcare and Deceiving Americans. Wendell, so good to have you with us.

WENDELL POTTER: Thank you. Good to be here.

PERIES: Wendell, let’s begin with your thoughts on the debate. What did you think of the back and forth between them?

POTTER: Well, it surely was a spirited conversation, or debate, if you will. They’re approaching healthcare from very different perspectives. Hillary Clinton, much more of a pragmatic approach, and probably based on her many years of experience, going back when she was First Lady, of trying to push healthcare reform forward. Bernie Sanders’ approach is much more aspirational. He would try to get us, if his plan were successful, to universal coverage in a way that Democrats for years have dreamed about, but have not been able to figure out how to do it. I say aspirational in that it would require significant changes or, or approval by Congress, and quite frankly, neither approach, neither Clinton’s nor Sanders’ has much of a chance of being successful unless there are significant changes in the makeup of the Congress that would put Democrats in charge of both chambers again.

PERIES: Now, one of the things that Bernie Sanders said was that 29 million people were still left uninsured. And he really pushed back on the notion of Medicare for all. Now, is Hillary Clinton, from your opinion, against that?

POTTER: I think that she’s not against–well, she actually has said that she doesn’t think that the approach that he is taking has plausibility. And she’s been very critical of it. So I think that she probably, at this moment, would say that she is not for Medicare for all. In the past she has expressed admiration of that idea, and has said that she thought that we should move forward towards a single-payer healthcare system. But that’s not been what she has said in recent years.

PERIES: Let’s dig down a bit. What specifically did she mention or is she advocating for in terms of building on Obamacare?

POTTER: Well, one of the things that she suggests is that we need to tackle cost. And she’s right about that. The Affordable Care Act has done some good to bring the cost of healthcare in line, but not nearly enough. And particularly, the cost of pharmaceuticals. The cost of drugs is continuing to skyrocket. And one of her ideas is to allow Medicare to negotiate with drug companies to bring the cost of drugs down for Medicare beneficiaries, and to cap the amount of money that individuals who are covered in private plans have to pay out of their own pockets for pharmaceuticals.

So those were a couple of things that she has suggested, and she also would try to get more people covered in Medicaid. As you know, a lot of the, the states have not yet expanded Medicaid program. So I’m sure she would work to try to get more people enrolled, both through the exchange plans and also through trying to persuade other states to expand their Medicaid programs.

PERIES: Now, one interesting part about all of this is that actually, according to an Intercept article, indicated that Hillary Clinton has taken almost $3 million in speaking fees from healthcare industry groups, almost as much as she has taken from the banking industry itself. As a former insurance executive, which you are, how do you see this affecting her policy positions?

POTTER: It’s concerning to me. I really do think that taking that much money from the industry should concern voters. She says that she would not be influenced by pressure from the industry. We’ll have to take her on, take her word for that. But I know how big money makes a big difference in Washington. My next book, by the way, is how money corrupts our democracy. It’s called Nation on the Take: How Big Money Corrupts Democracy and What We Can Do About It. And I look at the pharmaceutical industry in particular, and how that industry is able to influence public policy in ways that they never lose. They do this through campaign contributions to presidential candidates and congressional candidates, and through lobbying money, that they spend more than any other industry, to get what they want in terms of policy and regulation.

So these industries, the healthcare industry, is inordinately powerful and influential, and they use money to make sure that that power and influence stays intact.

PERIES: Now, one of the things that she claimed during the debate, and that is Hillary Clinton, she claimed that, you know, she had a great deal of experience fighting back the insurance industry. And in fact, if they were to come after anyone between the candidates presented on Sunday night, that it would be her, because of her track record. Does that have any merit with you?

POTTER: I think the industry would come after whoever the Democratic nominee is. Now, that said, a lot of the companies will try to hedge their bets. They will, and are, donating to candidates in both parties. But we will see, if history is repeated, that they will spend far more money to try to get a Republican elected than either of the Democratic candidates. But they will donate certainly–and they are–to Hillary Clinton’s campaign. And probably to a certain extent to Bernie Sanders’ campaign, although he is not accepting money from super PACs, he’s not accepting “big money” contributions. So there is that significant difference.

PERIES: Wendell, President Obama in bringing us Obamacare really had to negotiate with pharma and the insurance industry to come to certain agreements, both on pricing and in terms of the cost of medications. But what is it that he actually gave away in terms of the American public, to be able to get Obamacare from them?

POTTER: He gave up a lot. And he went back on a lot of his campaign contributions–excuse me, campaign statements and promises. He said that, for example, that he would–whatever legislation he would support would have to have a measure that would enable Medicare to negotiate with drug companies to bring the cost of drugs down for Medicare beneficiaries. And he also said that he favored allowing Americans to re-import drugs from Canada, [that is] buy drugs that were made in the U.S., shipped to Canada. And the current policy is now that Americans cannot legally buy medications from Canada. So he would change that. That has had bipartisan support, by the way.

And he also campaigned on allowing Americans to choose a “public option”, which would be a new kind of insurance plan operated by the government that would compete against private insurance companies. All those went by the wayside during negotiations, because the insurance industry definitely did not want the public option. They didn’t want to have any new competition. And the drug companies wanted to maintain their profit margins as well, too. So those all went by the wayside during the negotiations.

To his credit, he knew that because of all the money that’s spent to influence public policy, he had to do that for anything to get passed. The insurers and the pharmaceutical companies in today’s world are just too influential on Capitol Hill.

PERIES: Noted. I am from Canada, and for the last 25 years that I’ve lived in Canada I haven’t seen a single medical bill, so I thank you for making that note. And Wendell, I really hope to have you back very soon, as we are going to be following this issue throughout the campaign.

PERIES: I appreciate that. Thank you so much.

Wendell Potter is a journalist and former health insurance executive. His books include the New York Times bestseller “Deadly Spin, An Insurance Company Insider Speaks Out on How Corporate PR Is Killing Health Care and Deceiving Americans,” and “Nation on the Take: How Big Money Corrupts Our Democracy and What We Can Do About It.”…