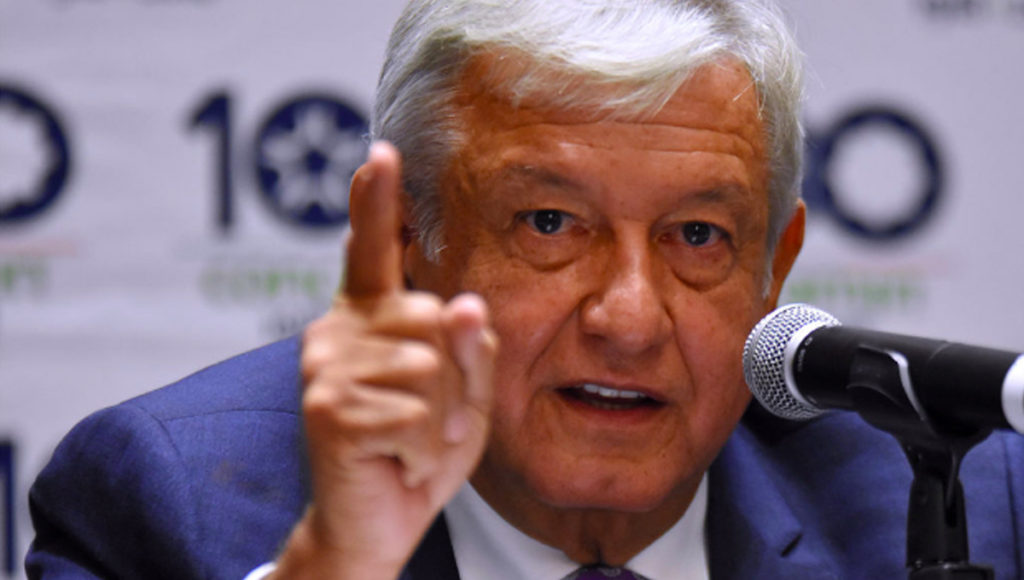 It’s been a week and a half since Mexico held a historic election in which they elected Andres Manuel Lopez Obrador as its new president with 53 percent of the vote. This is the first time in Mexican modern history that a progressive has been elected as president. AMLO’s party, Morena, also won majorities in Congress and in 17 out of the 32 legislatures. AMLO now begins the process of putting together his cabinet and his policies, which he gets to implement when once he is inaugurated on Dec. 1 of this year.

Joining me now to take a closer look at the post-election situation in Mexico is John Ackerman. John is professor at the National Autonomous University of Mexico and editor in chief of the Mexican Law Review, and a columnist for the publications La Jornada and Proceso. Good to have you back with us, John.

JOHN ACKERMAN: Wonderful, Sharmini, as always to talk to you.

SHARMINI PERIES: All right, John, let’s start off with this huge mandate AMLO has gotten. How broad and deep is it?

JOHN ACKERMAN: Well, yeah, this is really a historic achievement. Not only that the left has won, finally, in Mexico after decades of being left out of the pink wave, but just, you know, the fact that, you know, the size of the victory. So Lopez Obrador got 30 million votes. This is much more than any contemporary president. You know, just to get an idea, Pena Nieto six years ago got 19 million. Calderon around the same, 18 million in 2006.

So this is, you know, really almost twice as much as the most recent presidents. Fox got 15 million in 2000. So there’s a really strong mandate, 30 percent ahead of the second place; sweeping Congress, sweeping the state legislatures, winning most of the governorships that were up for grabs. And so you know, he’s really kind of blasted away at this very powerful opposition to him, which is actually- he’s been [inaudible] but the sort of authoritarian regime has been in power for the last 20-30 years. And you know, it was quite surprising to most people that two days after the election last Tuesday, Pena Nieto invited Lopez Obrador directly to the National Palace to, you know, start the negotiations about the transition of power.

Now, the next day he met with the leading oligarchs. You know, the people, the Consejo Coordinador Empresarial, which is the top organization of the most powerful businessmen in Mexico. And he’s, you know, gotten to work immediately, having meetings with his cabinet, his cabinet he had appointed. He invited the cabinet members from back in December, actually. He did one switch in terms of the Secretary of Foreign Relations. But generally he’s keeping with the same team, and starting to, you know, interview and appoint people who are going to be at the second and third levels of government.

So he’s really moving forward very quickly, and sending signals of stability, responsibility, to the international markets. So he’s getting sort of generally international positive coverage and international press. And everybody is kind of waiting to see what’s actually going to happen on the ground with his, with his government.

One of the strange or unique things about the Mexican political transition is that we have this very long period of five months. So the election was on July 1. He doesn’t take power until December 1. So this is a, you know, a limbo period which is delicate to manage as the president-elect.

SHARMINI PERIES: Speaking of foreign policy, John, now, Mexico City mayor Marcelo Ebrard has been appointed, or at least selected by AMLO as the potential candidate as foreign minister, and he apparently is expected to meet with Pompeo from the United States, Secretary of State coming Friday, where they will discuss if Trump will actually attend the inauguration of Lopez Obrador. Give us a sense, first of all, who this new appointee is as foreign minister, and second, how the conversations between the U.S. and Mexico may shift under the leadership of Lopez Obrador.

JOHN ACKERMAN: We’ll start with the second question. So, Trump has been surprisingly, also, very positive about Lopez Obrador, Lopez Obrador being a nationalist; not a Trump-style nationalist, but someone, you know, proud of defending national sovereignty. He had been portrayed in the U.S. press as a, as a danger to the United States. You know, there were crazy conspiracy theories that somehow he might be supported by the Russians, and that kind of stuff. But actually, on Sunday night once Lopez Obrador was, it was obvious that he was going to win by a landslide, Trump immediately put his tweet out there saying, you know, I celebrate the election of Lopez Obrador. Then the next day, on Monday, they spoke on the phone. And it’s even said that, you know, Lopez Obrador has invited Trump to his inauguration. And this Friday, the 13th, Pompeo is coming down on an official visit with Pena Nieto, but apparently the real, the real mission is to meet with Lopez Obrador and with Ebrard.

So you know, it’s kind of surreal. Lopez Obrador has been, you know, very, very much of a critic of Pena Nieto first, and also of Trump. And now all of a sudden everybody’s getting along. Now, we’ll see how this pans out. This might just be a very short honeymoon. We know how Trump is, you guys know how he is. He’s most likely this kind of, you know, faking it out. But also, you know, he’s demonstrating something that’s really objectively correct. You know, Lopez Obrador comes in with this incredible legitimacy, incredible support of his people, so he’s a man who has to be respected, in the end. We’ll see how things turn out on Friday.

Now, Marcelo Ebrard is the new person that looks, Obrador has chosen as his foreign secretary instead of Hector Vasconcelos, who is going to, who is also elected, apparently, to the Senate. He’s going to go to the Senate and hopefully, from his point of view and Lopez Obrador’s point of view, chair of the Foreign Relations Committee in the Senate, which is a very key post for the approval of ambassadorships and consuls, and that kind of stuff. So you know, they’re working together. But Marcelo Ebrard is the new foreign minister. He has a little, doesn’t have a whole lot of experience in foreign affairs. He’s been working with the UN, and living in Paris, and helping-. In Los Angeles he worked with Villaraigosa in Los Angeles for a while over the last two years, since he left the the head of government of Mexico City in 2012 when his term ended.

SHARMINI PERIES: All right. Now, John, finally, let’s talk about the kind of majority that AMLO has to govern with. I mean, he’s very close to a majority in Congress and in the state legislatures. That would allow him to implement all sorts of constitutional reforms. So what type of reforms are at the top of his agenda, here?

JOHN ACKERMAN: Well, yes, he will definitely have control both houses of a, you know, a normal majority, over 50 percent. And it looks like he might have the majority of the state legislatures as well. He would need to get up to two thirds in both the Senate and the House or the Chamber of Deputies in order to do constitutional reforms. But it shouldn’t be, that wouldn’t be difficult either. Because you know, the PAN and the PRI, the other two parties are in such disarray that they could probably be convinced to join Lopez Obrador with structural reform in different areas.

Now, Lopez Obrador has said that he’s not going to give a high priority to legal reforms at this moment. This is sort of the, this is what Pena Nieto did. Six years ago he came in, he did all these legal reforms, [inaudible] reforms, and he kind of spent his political capital, the little political capital Pena Nieto had, on those kinds of reforms. And then the, you know, the job of governing, itself, sort of came as secondary. Lopez Obrador is going to invert this and really focus from day one on the job of governing itself, using executive power not in an authoritarian way, but you know, we have a powerful state in Mexico. It’s not a failed state. It’s just that we haven’t actually been able to implement the laws that are on the books.

So he wants to get in there on day one and, you know, start you know doing infrastructure projects. Healthcare, education, scholarships for youth. You know, he really wants to start working from day one. And he’ll do some legal reforms, but I don’t think he’s going to put that on his agenda as number one of, you know, big constitutional reforms. That would come, I think, during the second half of his, of his period of his presidency. A six-year period, the last three years in which he would, you know, may want to consolidate his achievements through legal and constitutional reforms. But you know, even given this incredible majority, I think that he’s going to, he’s going to go more towards, you know, public policies, and less towards, you know, negotiating legal reforms in Congress at this moment.

SHARMINI PERIES: All right, John. This is an incredible moment in Latin American history and Mexico in particular. And the incredible mandate that’s given to Lopez Obrador, he could do just about anything he wants under the circumstances. And I thank you for joining us, and this will be something we will be watching and following closely, and looking forward to coming and visiting you in that transition.

JOHN ACKERMAN: Please, Sharmini, come on down. You, Paul, the whole team is absolutely welcome. It’d be great to have you guys here, watching and reporting on the complexities and the great hope that we have in political transformation in Mexico. It really is a shot in the arm given the global context, right. You know, you guys in the United States, South America, Europe, you know, the responses to the collapse of the centrist neoneoliberal consensus have been very strange. You have Macron, you have Trump, you have Macri, you have Lula in jail. Rafael Correa, they want to put him in jail, as well. And suddenly we have this sort of hope of a new way of doing politics from the left and in the 21st century. So I think Mexico could really set the agenda in a positive way, but we definitely need, you know, international solidarity and support, because it’s not going to be an easy, an easy struggle.

SHARMINI PERIES: All right, John. Thank you so much for joining us.