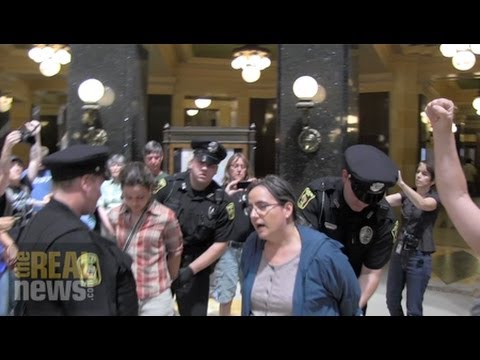 DAVID DOUGHERTY, TRNN PRODUCER: Arrests in the Wisconsin State Capitol building have become a common sight over the past two years. In the past two weeks alone, more than 100 demonstrators have been arrested during the weekly held Solidarity Sing-Along protests, with this most recent wave of arrests taking place on Tuesday, August 6.

The protests have targeted Republican Governor Scott Walker, who gained notoriety in 2011 after essentially banning the rights of collective bargaining for public workers in Wisconsin, sparking a wave of popular mobilizations across the state.

These protesters say the spike in arrests at the Capitol building represent a threat to freedom of speech and that Governor Walker’s response to his political opposition has become increasingly authoritarian.

Katie Reader has been participating in the actions as a legal observer.

KATIE READER, LEGAL OBSERVER: I have been seeing a lot of people’s civil rights being violated, people not only being arrested but arrested roughly. It is specified in our state constitution that this is a public forum, and so people have the right to be here. Walker does not like hearing any sort of dissent, and neither do the other Republicans in the legislature.

DOUGHERTY: It’s not just the protesters who have been targeted for arrest. Police have also threatened observers, including Wisconsin State Representative Sondy Pope.

Videographer Arthur Kohl-Riggs has been documenting the Wisconsin protests since the initial occupation of the Capitol Building in March 2011 and says that journalists have also been threatened with arrest by the Capitol police.

ARTHUR KOHL-RIGGS, VIDEOGRAPHER AND ACTIVIST: Today they walked around the balcony of the rotunda, warning all the tourists and spectators that spectating is considered participation, and if you do not disperse immediately, you will be subject to arrest. This is a public space, so you do not need a permit or preapproval to be in. But today, if you happen to be in the rotunda watching what’s going on, you’re subject to arrest.

Later, they told a handful of people who for all intents and purposes were not participating–they were there with camera either as bloggers or citizen media or real media–and he made a sweeping point and generalization that all of you are participants and you’re all subject to arrest. Later, three people were arrested, it appears, just for filming the police.

DOUGHERTY: In 2012, Governor Walker weathered a referendum campaign seeking to recall him from office [incompr.] spent over $30 million in public relations in campaigning. He has since pushed for a number of controversial public policies impacting public education, voter ID laws, and women’s reproductive rights, among others.

BILL DUNN, PROTESTER: Union membership is down drastically, more in some unions than others. And that was the purpose of Scott Walker’s Act 10. It was to gut unions and get rid of his political opposition.

We’re a thorn in the side of the Republicans and Scott Walker. They want to get us out of here so bad that it’s–. That’s why we are determined to stay here. And they’re arresting people. But the thing they don’t realize is when people are arrested, they don’t get intimidated; they get radicalized and even more determined.

DOUGHERTY: The Solidarity Sing-Along group has developed ties with other movements in a number of states addressing similar issues with Republican-led state governments, with some of them organizing their own sing-along protests in solidarity with Wisconsin. Although the numerous arrests have led to mounting legal costs for the group and its participants, they have vowed to continue their gathering and singing in the capital in opposition to a government that they say does not represent working people’s interest.

This is David Dougherty with The Real News Network.