Indigenous lawyer Pam Palmater explains that the first Trudeau government broke virtually all of its promises to indigenous peoples.

Indigenous lawyer Pam Palmater explains that the first Trudeau government broke virtually all of its promises to indigenous peoples. 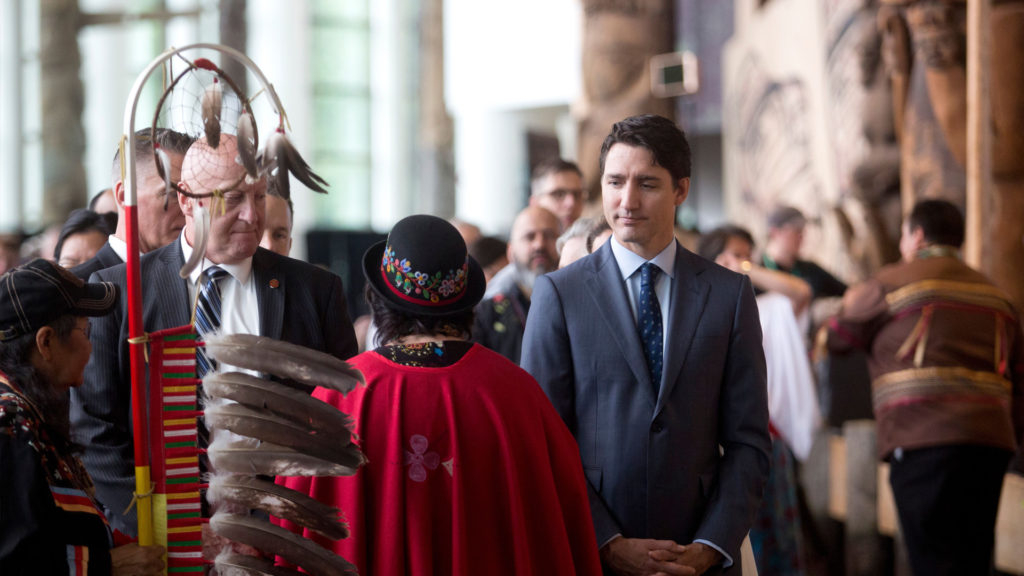 This interview was recorded on Monday October 21, 2019

In September 2007, the United Nations adopted a Declaration on the Rights of Indigenous Peoples. Article 43 of the Declaration enshrines rights that “Constitute the minimum standards for the survival, dignity, and wellbeing of the Indigenous peoples of the world.” The first of the Declaration’s 46 articles declares, “Indigenous peoples have the right to the full enjoyment, as a collective or as individuals, of all 8 human rights and fundamental freedoms as recognized in the Charter of the United Nations, the Universal Declaration of Human Rights and international human rights law.” Finally, Article 26 states that “Indigenous peoples have the right to the lands, territories and resources which they have traditionally owned, occupied or otherwise used or acquired,” and it directs states to give legal recognition to those territories.

The Declaration was adopted by 144 countries with 11 abstentions and 4 countries against. These four countries were New Zealand, Australia, the United States and Canada; all colonial states. Australia and New Zealand have since reversed their positions and now support the Declaration. Where does Canada fit into all of this? Canada’s next federal election is today and for the Indigenous peoples of this country, the status in Canadian law of the UN Declaration on the Rights of Indigenous Peoples is certainly an important electoral issue.

To discuss all of this, I’m joined today by Pam Palmater. Pam is a lawyer and member of Eel River Bar First Nation, currently holding the Chair in Indigenous Governance at Ryerson University in Toronto. She’s also a frequent media commentator, author, and former spokesperson and educator for the Idle No More movement in Canada defending Indigenous lands, waters, and sovereignty. And she joins us today from Toronto, Canada. Thank you for coming back onto The Real News, Pam.

PAMELA PALMATER: Thanks for having me. I’m a huge fan.

DIMITRI LASCARIS: So Pam, in the last federal election in 2015 the Liberal Party led by Justin Trudeau promised to implement the declaration. After winning that election, how did Justin Trudeau perform in regard to that key electoral promise?

PAMELA PALMATER: Well, that’s part of the problem, that promise and many others, he failed to fulfill. I mean he made some very definitive promises about what he would do in his first four years and he said his first order of business would be implementing the United Nations Declaration on the Rights of Indigenous Peoples, which would be also at the same time conduct a comprehensive review of federal laws to make sure that all Canadian laws are compliant with Section 35 of Canada’s Constitution, which protects Aboriginal and Treaty rights and also to repeal all of the legislation that the former conservative government imposed on First Nations without their consent. He didn’t do any of that. And in fact, the Liberal government continued to stall on UNDRIP, and they would go back and forth. So one day he would say, “It’s our plan to fully implement UNDRIP unconditionally.” And then the next day his Minister of Justice would say, “We can’t implement UNDRIP into law. That’s just completely unworkable.” So they’ve been going back and forth and back and forth. And here we are, election day, and UNDRIP has not been implemented into law in Canada.

DIMITRI LASCARIS: So please talk to us, Pamela, about the political dynamic in Canada surrounding UNDRIP and for the benefit of our audience. UNDRIP is the acronym for the UN Declaration on the Rights of Indigenous Peoples. Why did the Canadian government, in your view, oppose UNDRIP in 2007 and why did the Trudeau government break so many of its promises relating not only to UNDRIP but other issues important to Indigenous peoples after 2015?

PAMELA PALMATER: Well, you have to keep in mind that Canada’s a colonial country and that they obtained all of Indigenous lands and resources primarily by theft and some through fraud and duress and what the national inquiry into murdered missing Indigenous women calls genocide, both historic and ongoing. So there’s a lot that Canada has to account for, and by implementing UNDRIP into law in Canada, it would require the federal government to effectively change everything, how everything is governed, the distribution of lands and resources, compensation or reparations for past abuses and a real firm protection of not just Aboriginal and Treaty rights and land rights and the right to be self-governing. But at the core of this controversy is what’s known as Free Prior and Informed Consent by Indigenous peoples before Canada enacts any legislation that impacts us or our rights, does any kind of extraction or development on our land, and that seems to be the crux of the controversy around UNDRIP.

DIMITRI LASCARIS: And more recently, Pamela, there was a decision rendered by the Canadian Human Rights Tribunal relating to Indigenous children. The government was ordered to pay the maximum statutorily allowed damages of $40,000 per victim. And the Trudeau government announced just before the election that it was challenging this decision in federal court. Could you tell our audience about the substance of that decision and what you make of the Trudeau government’s claim to be more or less in agreement with much of the decision, despite the fact that it’s challenging the decision in federal court?

PAMELA PALMATER: Yeah. So you really just have to look at the documents. I mean, this is a case that was started by Dr. Cindy Blackstock, an Indigenous woman who is just trying to get the federal government to pay equally for First Nation kids who are in foster care so that they don’t have to be in foster care and preventative services equally with what other Canadian children receive. In some cases, they receive upwards of 70% less. And the Canadian Human Rights Tribunal found that that was solely because they were First Nations, so solely based on race. And so they ordered Canada to stop the racial discrimination and equalize the funding and they didn’t do it. So they issued a noncompliance order and another one and another one. So Canada’s now has eight noncompliance orders.

And so because of that, with no other options, then the Canadian Human Rights Tribunal makes this order for compensation; rightfully so, because of all of the abuses that First Nations suffer in foster care. And instead of accepting it, they appealed it. And they didn’t just appeal it on the grounds of, “We accept the decision, we accept that we have to compensate; we just want to negotiate the amount,” like how they present it in the media. If you actually read the legal documents, they want all of it overturned, they don’t accept any compensation or any order for the Canadian Human Rights Tribunal. So you’ve got a real dissonance between the nice words that are spoken by the Liberal government and what they do on the ground or in the courts, and it’s almost always the opposite of what he’s saying. And that’s really led especially Indigenous voters to be very disillusioned with the Liberal Party after so many promises.

DIMITRI LASCARIS: So far, we’ve been focusing–and understandably so–on the Liberal Party, because it is the governing party and it certainly stands a good chance of remaining the governing party for another four years. The polls, however, are indicating–as I’m sure you know, Pamela–that it’s quite unlikely that we’re going to see a majority government emerge from the election today and that either the Conservatives or the Liberals will have the most seats–albeit a be at a minority of seats–and will be forced to enter into some kind of a coalition arrangement with one or more other parties. And right now, based on polls, it seems most likely that those parties will be either the NDP and/or the Bloc Québécois–the Sovereigntists Party in Quebec–if, in fact, that happens. And based on the performance of these parties federally and provincially, with respect to Indigenous Rights, do you anticipate seeing a dramatic change in the way that Indigenous peoples are treated by the federal government, or do you think we’re largely going to be stuck with more of the same as long as a Liberal or Conservative government is part of the leading member of the coalition?

PAMELA PALMATER: Well, you raise a really good point because all of the problems in the Canada First Nation relationship is the result of multiple governments over time, federal and provincial, from all backgrounds engaging in acts of genocide and not living up to our rights. So this isn’t just, a party thing. However, we know that prior to Trudeau and one of the reasons why First Nation supported him so much in the last election is because the previous 10 years under Stephen Harper’s Conservatives was especially brutal. It was a complete denial of Indigenous Rights, an increase in the courts, using the courts against us. Massive funding cuts. I mean it was so bad under that government, it inspired the Idle No More movement. I mean, very historic in Canada. So we had the opposite; Justin Trudeau saying, “Listen, I’m going to do the opposite of him. We’re going to have a good relationship,” and that was really hopeful. Now, we see what he did and what he didn’t do. So you’ve got a whole bunch of not just disillusioned Indigenous peoples but disillusioned Canadians because it wasn’t just Indigenous peoples upset that he bought a pipeline and it wasn’t just Indigenous peoples that were upset that he was passing legislation that wasn’t passing muster in terms of basic rights and freedoms.

DIMITRI LASCARIS: Well, we’ve been speaking to Indigenous lawyer, activist and academic Pamela Palmater about Canada’s federal election, which is happening today as we speak, and the performance of the Liberal Party and Justin Trudeau on Indigenous Rights leading up to the election. Thank you very much for joining us today, Pamela.

PAMELA PALMATER: Thanks for having me.

Pam Palmater is a Mi’kmaw lawyer and member of Eel River Bar First Nation, currently holding the Chair in Indigenous Governance at Ryerson University. She is also a frequent media commentator, author, and former spokesperson and educator for the Idle No More movement in Canada defending Indigenous lands, waters and sovereignty. Media: www.pampalmater.com is her…