Real News senior editor Paul Jay says the Saudi crown prince is becoming a liability for the Trump administration's strategy for regime change in Iran – From a live recording on October 16th, 2018

Real News senior editor Paul Jay says the Saudi crown prince is becoming a liability for the Trump administration's strategy for regime change in Iran – From a live recording on October 16th, 2018 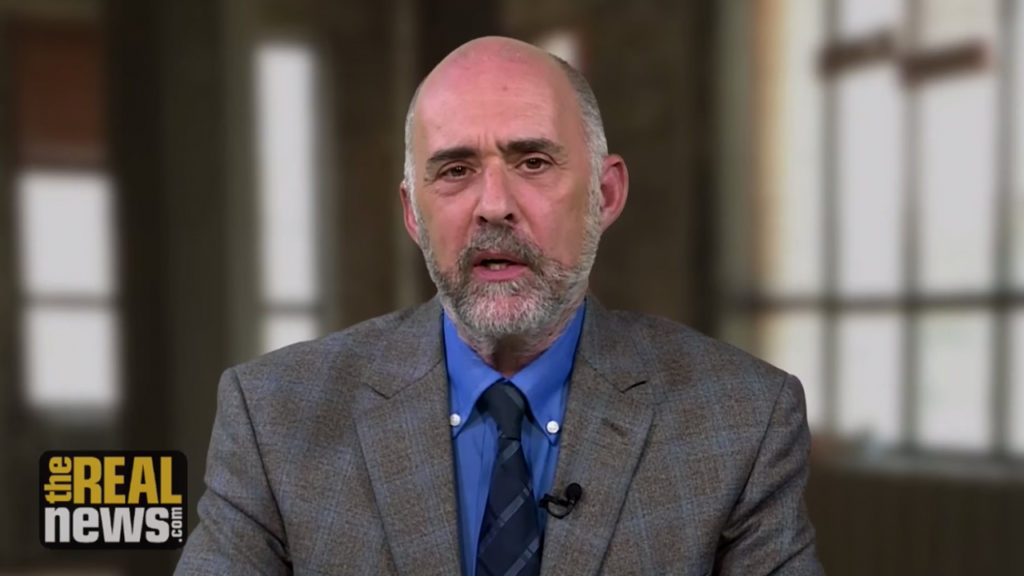 BEN NORTON: What is interesting is in response to claims the U.S. may take some kind of punitive action, although it’s unclear if it will, in response to the alleged killing of Kashoggi, Saudi Arabia actually threatened to ally with Iran. So I think you’re absolutely right that the U.S. and elements in the national security state are afraid that Mohammed bin Salman may have gone off the leash too much, if you will. And even his threat to potentially ally with Iran would be well [crosstalk].

PAUL JAY: That can’t be a serious threat, because even he knows he’ll be dead five minutes later. I mean, there would be a coup so fast in Saudi Arabia. The Americans will never life with such a thing.

BEN NORTON: You referred to an interview we did here at The Real News Network with As’ad Abukhalil, who is a professor in California, a leading expert on the Middle East. And he, as you acknowledged, pointed out that Khashoggi was allied to different elements of the royal family; specifically, the bin Faisals and Waleed bin Talal. Bin Talal is one of the richest people in the world, a billionaire, who was, in fact, imprisoned by Mohammed bin Salman, the crown prince, in the Ritz Carlton, in Saudi Arabia. A luxurious imprisonment, but an imprisonment nonetheless. And we have seen, as you mentioned, MBS try to remove anyone who stands in the way of power. And as Trump said, that does seem to frighten the U.S. in some ways. I actually have a clip here of the rally you mentioned. This was earlier this month, in early October. Trump said the Saudi regime would not last two weeks without us. Here’s that clip.

DONALD TRUMP: We protect Saudi Arabia. Would you say they’re rich? And I love the king. King Salman. But I said, King, we’re protecting you. You might not be there for two weeks without us. You have to pay for your military.

BEN NORTON: Yeah, so you raise a lot of points that I wanted to talk about, maybe we can go over them in more detail here, about Khashoggi and this killing, and MBS getting off of the U.S. imperial leash, if you will. We have seen elements of both Republican and Democratic parties who have been interviewed on corporate media outlets in the last few days. They have all insisted that Saudi Arabia is still a key part of the U.S. national security strategy, is still a key ally when it comes to U.S. foreign policy. However, some have voiced more criticism of Mohammed bin Salman. You mentioned that you even have some Republicans, who are- like Lindsey Graham- who have floated the idea of forcing MBS to resign. How do you think, in the future, this could influence the Saudi special relationship, if you will, because maybe someone could see the U.S. strategy as trying to oust MBS and replace him with someone who’s more docile. But others might say that with the decline in U.S. power, with the rise in China and Russia, this could potentially be another indicator that U.S. power is declining, and even if they get rid of someone like Mohammed bin Salman, that someone who replaces him might not be willing to simply kowtow to U.S. wishes.

PAUL JAY: I’m reminded of the Mark Twain quote about the rumors of my death have been greatly exaggerated. I think the talk of the decline of American power has been greatly exaggerated. Yes, we’re in a world where certainly China’s much stronger, Russia’s much stronger. It’s not the same world as the ‘90s after the fall of the Soviet Union. But we are not in a world where a Saudi leader can cross a line to such an extent to break from the American domination. They have way too many ties.

It goes both ways. The amount of money that flows from the Saudi, various trillionaires and billionaires, and princes, and kings- I mean, the amount of money that goes into the West is one thing. But the American, the history of American domination there is- they are not going to allow it. And there’s nothing Russia and China can do about it. Russia and China didn’t support the invasion of Iraq, but they couldn’t do anything about it. Especially when it comes to the Middle East, I don’t think there is a hair of evidence that they would allow the Saudis to play a game like that. The question will be does MBS come to heel and be a very, very wealthy dog on a leash, as you described. But the Americans, I’m sure, have all the tools it takes to bring him down, if that’s what it comes to.

Now, they may prefer not to go there, because they’ve got a short window here to go after Iran before the 2020 elections. And if they’re in fear of losing the 2020 elections, and they should be in fear of that, and as much as the Democratic Party leadership, especially the foreign policy old guard are very much on the page of confronting Iran, still, the Obama section won the day. They did the deal with Iran, the nuclear deal. They did not want a straight-up military confrontation. They certainly don’t want to try to force a regime change with Iran. And if those people come back to power in 2020- and that’s highly probably right now- then these neocons who have been dying to overthrow and bring down the Iranian regime for decades- I mean, let’s never forget this document that came from the Project for a New American Century which included, you know, Rumsfeld, and Cheney, and Bolton was part of it. And Bolton’s back in a position of power and influence again. Overthrowing the Iranian regime was the fundamental objective of- even the invasion of Iraq was to set the table for going after Iran.

BEN NORTON: Yeah, the leading general, four-star general Wesley Clark famously exposed in an interview with Amy Goodman at Democracy Now! that after 9/11 the Bush administration immediately drafted a list of seven countries to overthrow in five years. On that list included, of course, Iraq, Syria, Lebanon, Libya- you know, all these countries have been destabilized. But the cherry on top was, of course, Iran.

PAUL JAY: I would say more than a cherry. It was the real prize. Everything else is kind of a building block to getting there, because none of these other countries are regional powers. And Iran is a regional power. It’s a serious, a large economy. A big population. A serious army.

So the question facing the U.S. now, and maybe they’ve already answered this, in a sense- like, I’ve been asking everyone, why are they making such an issue out of this journalist? Why are they going after the Crown Prince so directly? Maybe they’ve already decided his fate. But the counterargument would be if you’re sitting in these circles you don’t want too much chaos in the House of Saud if you’ve only got less than two years to go after, and try to bring down, or weaken, or even bring down the Iranian government and ruling strata, there.

So I think maybe that’s part of the debate that’s going on. Either scare the hell out of MBS and make sure that he plays ball- and I think it’s very important, the split in the Saudi elites over the war in Yemen. The brother of King Salman is very publicly against what’s going on in Yemen, think it’s weakening Saudi Arabia. It’s exposing how weak the Saudi military is, that they can’t even bring Yemen, not a developed country with a sophisticated army, and they’re in an endless war in Yemen now. A lot of the serious leadership of Saudi Arabia think this has become an MBS, a Mohammed bin Salman, ego trip. And it’s getting in the way of the real target, Iran.

So we’ll see what happens here. But I think they, they would probably rather, at this point, be done with MBS. But it may be too complicated for them to achieve. As strong as the Americans are, they don’t control everything. Far from it. And so these things start to unravel.