After withdrawing from the Iran nuclear deal, the U.S. is threatening those countries who remain in it. We speak to scholars Eskandar Sadeghi and Pooya Ghoddousi, who have organized an open letter urging the European Union to withstand U.S. pressure and save the agreement

After withdrawing from the Iran nuclear deal, the U.S. is threatening those countries who remain in it. We speak to scholars Eskandar Sadeghi and Pooya Ghoddousi, who have organized an open letter urging the European Union to withstand U.S. pressure and save the agreement 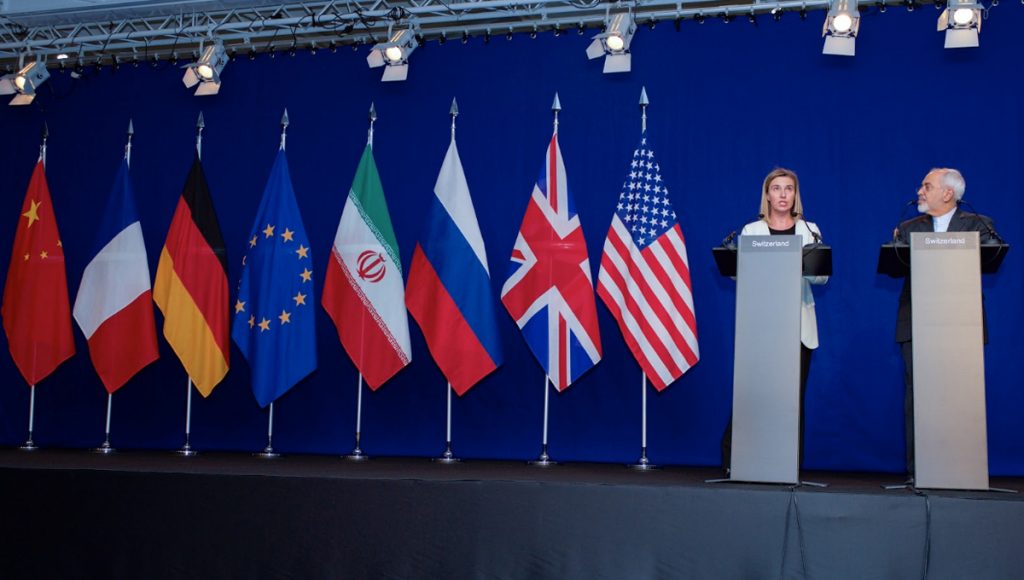 AARON MATÉ: It’s The Real News, I’m Aaron Maté. By withdrawing from the Iran nuclear deal, the Trump administration is not just imposing new sanctions on Iran, but threatening sanctions against those who do business with it. In a speech Monday, Secretary of State Mike Pompeo addressed those countries remaining in the Iran deal and working to save it.

MIKE POMPEO: We will hold those doing prohibited business in Iran to account. Over the coming weeks, we will send teams of specialists to countries around the world to further explain administration policy, to discuss the implications of sanctions re-imposition, and to listen. I know, I spent a great deal of time with our allies in my first three weeks. I know that they may decide to try and keep their old nuclear deal going with Tehran. That is certainly their decision to make. They know where we stand.

AARON MATÉ: European countries, in particular, will face the brunt of U.S. pressure. Iran says Europe will need to increase its investments in Iran in order to save the deal from total collapse. But several European countries have already expressed concern about the penalties they would face from the U.S. Well, I’m joined now by two guests who have organized an open letter urging the European Union to withstand U.S. pressure and save the Iran deal. Eskandar Sadeghi is a research fellow in modern Iranian history at University of Oxford, and Pooya Ghoddousi is a Ph.D. candidate at University College London. Their letter is available at openlettertomogherini.world. Pooya, I’ll start with you. What prompted you to organize this open letter?

POOYA GHODDOUSI: It was a very personal feeling when we were jubilant when the deal happened. And we were all in a state of distress and depression and fear when Trump announced leaving the deal. So when I heard Federica Mogherini speak to the Iranian people, not only the leaders, but to the Iranian people, and asked us to trust the European Union and the European countries to keep this deal alive, I felt like we have to talk back to Federica Mogherini and hold her accountable to this promise, and ask her, and try to strengthen her in her resolve that she was expressing very sincerely, as it seemed. So, this came all out of feelings that, when I shared it with a group of friends, they were all on board, and we got together. And next thing, we had this open letter that was supported by the names that you can see under the letter.

AARON MATÉ: And, but unfortunately, the signatories of the letter, and European citizens in general, are not the only constituents that the EU will be listening to. I mean, corporations have a huge amount of power. And what sort of pressures are corporations going to be under now, if they do business with Iran, and how will that impact the European Union’s ability to save the deal?

AARON MATÉ: Eskandar, let me bring you in. Is it possible for European governments to step up in such a way that Pooya is describing? Can they make up for the potential costs to European businesses by doing business with Iran, from the U.S.?

DR. ESKANDAR SADEGHI: I do think it’s going to be a real struggle, for at least larger European firms, because obviously what the Trump administration is trying to do is present these terms with an ultimatum, sort of either you’re dealing with the United States, or you’re dealing with Iran. And if you continue to deal Iran, you will pay the price. You will, as a result, have heavy fines, and you might be deprived of our markets. And obviously, the American market is a huge one. And obviously, the financial system is very much dominated by institutions which are very much, one might say, some disproportionate influence by the United States government.

And so, when we’ve seen this previously, with respect to the Obama administration, when it could actually forge an international coalition and isolate Iran in an unprecedented way. But what we have seen is that some European firms, gradually, have been preparing for this. They have been trying to, sort of, insulate their supply chains, as it were, from the United States. But the fact of the matter is, that larger companies, the likes of Total in France, Airbus, and whatnot, it’s going to be extremely difficult. And we’re already hearing the rumblings that this is going to be difficult and might be not very tenable.

So- and to be honest, I mean, the solar companies are important, and for instance, the Chinese have been providing billions in credit, so actually, various sorts of Chinese projects can be undertaken in Iran. But the fact of the matter is, if it wants to develop its oil industry, if it wants access to airplane parts and new airplanes, because- basically to renew a civilian faith for jobs. It has huge implications for the health of Iranian civilians flying. Because, as you may well be aware, it’s not uncommon for Iranian civilian airplanes to actually crash, simply because of Iran’s lack of access to new airplane parts.

So, I think it is going to be a struggle. And what this letter essentially amounts to, was a call for a public diplomacy, an attempt to sort of influence public opinion. Really, what we’ve tried to get together here are some of, you know, the world’s leading minds. With us, we have Professor Chomsky or David Harvey or Professor Judith Butler, and many, many others. Because, not only do we think these people have a significant something to add to the debate, we do think obviously European leaders will take note. Whether it will actually have a significant impact- we have to be realistic. And we’ve tried our utmost.

Just to sort of echo Pooya’s sentiments, we are very distressed about the really genuine implications of sanctions and their repercussions for the health and well-being of many Iranians. Because obviously, in the last round, there was actually difficulties. Though there wasn’t a direct sanctioning of medicines, it was actually very difficult for Iranians to procure certain key medicines. And this had implications across Iranian society. Even for instance, Iranian veterans, who as you know, suffered chemical weapons burns in the course of the Iran-Iraq war, couldn’t have access- often restricted access, or couldn’t get access to vital medicines, and their lives were in genuine jeopardy.

AARON MATÉ: When you talk about the implications, for example, to civilian planes in Iran, wasn’t that the area of the recent deal with Boeing, that Boeing pulled out of because of the sanctions?

DR. ESKANDAR SADEGHI: Exactly. I mean, the Trump administration fiercely sought to intimidate Boeing, even before they decided to pull out of the JCPOA. And this was always on the rocks, and obviously it’s very much part of the deal, and it was seen to be as a goodwill gesture. It was seen as sort of building trust once again, almost sort of between Iran and the United States, exactly because Iran has been deprived of these vital parts for so long. And as I said, many civilians have died as a result. This isn’t a joke. I mean, it has really genuine, life-changing consequences.

AARON MATÉ: So, what are the key arguments that could be made to convince the European Union to withstand U.S. pressure, withstand the concerns of powerful corporations in Europe, and save the deal. What could, you think, could possibly sway them at this point?

POOYA GHODDOUSI: Well again, I will go back to my emotional angle to this letter, and as well as emotional and moral angle to it. I think the European Union, as a supranational entity, has a specific position that should be, and could be, arguing from a moral position, that a deal has been made, a commitment has been made, and we have to remain steadfast in delivering what was promised under these promises and commitments.

DR. ESKANDAR SADEGHI: Just to add, I mean, just to echo exactly what Pooya’s saying. I mean, at least- the European Union, at least it sees itself as very much the aftermath of the Second World War. It sort of was born as a result of trying to forge peace between nations, and ensure Europe would never be afflicted by conflict again. And now, we’ve seen the Trump administration, very brazenly, pull out of this deal completely unnecessarily.

Iran, as you know- complete compliance with the deal, as attested to by all the other members of the agreements and the IAEA. And the Trump administration needlessly provoked another crisis, potentially. So, we should really appeal to Europe’s vision of itself. And basically, it is incumbent upon it to try and preempt another crisis in the region. And obviously, the Middle East is not one short of conflicts.

AARON MATÉ: All right, well we will leave it there. The letter is available at openlettertomogherini.world. My guest, Eskandar Sadeghi, research fellow in modern Iranian history at the University of Oxford. And Pooya Ghoddousi, Ph.D. candidate at University College London. Thanks to you both.

POOYA GHODDOUSI: Thanks. Thank you.