New Campaign Urges People “Off Fossil Fuels” In Their Own Communities 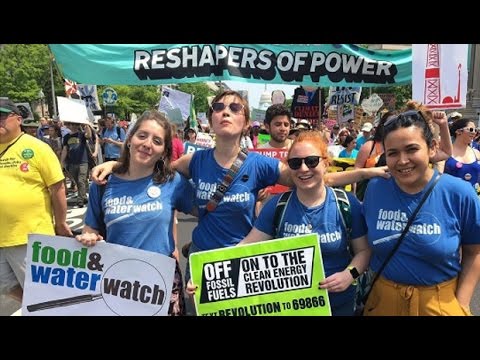 KIM BROWN: Welcome to the Real News Network in Baltimore. I’m Kim Brown. The political advocacy organization Food and Water Action Fund are launching a national campaign titled Off Fossil Fuels, on Saturday, May 13th, which was developed with Bernie Sanders’ campaign alumni. At a time when the Trump administration is emboldening climate deniers and rolling back environmental regulations federally, the new national action program will focus on lighting fossil fuel projects and promoting renewable energy at the local and state levels.

With us to discuss the new campaign, we’re joined with Wenonah Hauter. She is the author of the book titled, Frackopoly, The Battle for the Future of Energy and the Environment. She’s also the founder and executive director of Food and Water Watch, which is the first national advocacy organization to call for a ban on fracking. Welcome back to the Real News, Wenonah. We’re always glad to speak with you.

KIM BROWN: Well, before we get into Off Fossil Fuels, I wanted to ask you about a bit of breaking news, here on Friday afternoon, where Secretary of State Rex Tillerson has signed the Fairbanks Document. He has been in Fairbanks, Alaska all week meeting with foreign ministers from arctic nations, including Canada, the US, Sweden and a handful of others. They signed this document, which basically says not a whole lot. What the document … I’m not exactly clear what the document does. But what the document does not do, it does not affirm the Paris Accords. It does not acknowledge climate change is happening as a result of human induced activity. What are your thoughts about Secretary Tillerson signing this document?

WENONAH HAUTER: Well it sounds like another cynical move by the Trump administration. I mean, it’s no secret that Tillerson was the architect of Exxon Mobile becoming the largest fracker in the world. This agreement really doesn’t do anything, other than provide a PR moment for the administration, where they can talk out of both sides of their mouth. To me, it should inspire us to work a lot harder to stop every phase of fossil fuel development.

KIM BROWN: Let me read a piece, or a bit of an excerpt from the LA Times’ article about this. They say that the document says that the leaders signed it, “Recognizing that activities taking place outside the arctic region, including activities occurring in the arctic states are the main contributors to climate change effects and pollution in the arctic. And the underlining need for action at all levels.” But, Wenonah, is this administration willing to take action at all levels in order to prevent the eroding health of the arctic and the antarctic, as well?

WENONAH HAUTER: Certainly not. In fact, we know that the warming is taking place twice as fast in the arctic and that they’re experiencing a real crisis. This is just a ridiculous move by the Trump administration.

KIM BROWN: The end of April marked President Trump’s 100 days in office. Let’s take a look at a clip of President Trump at his 100th day rally in Harrisburg, Pennsylvania.

DONALD TRUMP: We’ve removed the shackles on energy exploration imposed by the last administration, lifting the restrictions on the production of oil, shale, and natural gas. And very importantly for Pennsylvania, we have ended the war on beautiful, clean coal and we are putting our great coal miners back to work. I’m also very pleased to say that we have finally cleared the way for the construction of the Keystone, XL, and Dakota Access Pipelines. 48,000 new jobs. We have signed massive executive orders clearing up the environmental bureaucracy. We’re going to have jobs and you’re seeing them already.

KIM BROWN: Wenonah, are we seeing these jobs already? There’s a lot of doubt as to whether or not these rollbacks on environmental regulation actually is resulting in more jobs, as the president says. What are your thoughts about this?

WENONAH HAUTER: Well, I think it’s more alternative facts, better known as lies, from the Trump administration. We know if they were really serious about creating jobs, they would be embracing solar energy, which is the largest job creator that we’ve seen over the past couple of years. And they would be embracing energy efficiency. We’ve known for decades that we must start becoming more energy efficient, using less energy. If we were to, for instance, retrofit every existing building with new windows and do many of the other things to make our nation more efficient, we would create tens of thousands, hundreds of thousands of new jobs. We could actually help working people in this country and help the environment.

The Trump administration is not interested in doing anything for the environment. It’s all about keeping a few greedy energy companies getting the cash and continuing to really destroy the environment. I mean, we have a small cabal of right-wing radicals who are running the government. They really don’t care very much about the future or jobs.

KIM BROWN: At the same time as Trump was making this speech in Pennsylvania, hundreds of thousands of people took to the streets in Washington, DC and across the country in protest of the Trump administration’s environmental policies. Talk about what we saw in the first 100 days, from environmental organizations and activists in response to the Trump way of being right now.

WENONAH HAUTER: We have seen amazing resistance. Not just the huge march in Washington, DC and the many marches around the country. We’ve seen a lot of real wins. We’ve seen fracking banned in Maryland. We’ve seen a number of pipelines stopped. We’ve seen, just this week, the project to fill salt caverns under Seneca Lake in New York’s wine region fall apart. That project will not go forward. What we see is when people get together, build a strategy, and work on these issues at the state and local level, we can win. We’re also seeing a real resurgence of activism at the town and city level to go 100% renewables. Pueblo City in Colorado just became the 22nd city to move to 100% renewable energy and to have a real plan for doing so.

KIM BROWN: Let’s talk about Off Fossil Fuels, the new campaign. Does it represent a new strategy for dealing with a federal government that seems pretty hellbent on pushing more fossil fuel use and driving further climate change?

WENONAH HAUTER: Yes, we believe so. At Food and Water Watch, we have offices in a number of states, where we’ve done a lot of deep organizing, banning fracking in places like New York, Maryland. We’re working actively in places like Florida, California, and a number of states with activist groups, grassroots groups. What we see is, it’s just not enough. We wanted to take a lot of the technologies that the Bernie Sanders’ campaign used to do what they called distributed organizing. It’s a volunteer led strategy, where using a number of these communication technologies, people can begin to organize at the local level their own campaigns, or they can help support other campaigns, other places in the country. It gives volunteers a way to communicate with each other. It gives us the ability to help provide a lot of tools to people all over the country who want to start doing the organizing that’s going to be necessary to really get off of fossil fuels.

We should face it. We are suffering from cognitive dissonance in this country. We are facing a species level emergency. We need to stop emissions and really front load it in the next decade to make our goals of not having a 2.6 Fahrenheit increase, or a 2 point centigrade increase in temperature. We need to do this, or we’re going to see such major impacts. We really want to lay siege to the fossil fuel industry. We want to stop all of these projects that are going to addict us to another 40 years of fossil fuel use. We want to stop the infrastructure for importing oil and gas overseas, which is part of the nefarious scheme that the Trump administration and its allies have embraced. We want to close the existing power plants in communities that are poisoning people, especially communities of color.

We believe that it is possible. We have the technology today to go 100% renewable and to use energy efficiency technologies. What’s keeping us from moving forward, really is the political will. We know that anytime there has been a major social change in our nation, it has taken millions of people banding together to make it happen. We believe that we can just help nudge that along. That it’s really all about the people around the nation who are going to hold their local officials, who are elected, accountable. There are a number of ways that people can get involved. One of the first actions that people can take is to go to an elected official in their community. It can be a state legislator, a county commissioner, or some other elected official, and ask them to sign a pledge to get off of fossil fuels and onto the clean energy revolution. If that person isn’t responsive, it gives the individuals in that community the opportunity to organize, to let that person know that he or she will not be re-elected if they don’t get with the program.

This is just a way to kick off a major way of holding our elected officials accountable, while at the same time, getting rid of these plants that are poisoning the planet.

KIM BROWN: We’ve been speaking with Wenonah Hauter. She is the author of the book Frackopoly, the Battle for the Future of Energy and the Environment. She’s also the founder and executive director of Food and Water Watch, the first national advocacy organization to call for a ban on fracking. She’s been talking about the new campaign called Off Fossil Fuels. That launches May 13th. Wenonah, is that right?

WENONAH HAUTER: That’s right. Tomorrow, we’re going to be launching it. We ask people to go to OffFossilFuels.org to find out more about it.

KIM BROWN: Fantastic. Well, we appreciate you joining us as always. We certainly will be keeping an eye on your campaign. Hopefully, you’ll come back and talk to us and give us a status update. Okay?

WENONAH HAUTER: Thanks so much, Kim.

KIM BROWN: Hey, Wenonah. You’re always welcome. Thank you for everyone for watching and supporting the Real News Network.