The Senate has held a hearing on a topic it hasn't taken up in more than four decades: the President's authority to launch nuclear war. William Hartung of the Center for International Policy discusses nuclear policy in the Trump era

The Senate has held a hearing on a topic it hasn't taken up in more than four decades: the President's authority to launch nuclear war. William Hartung of the Center for International Policy discusses nuclear policy in the Trump era 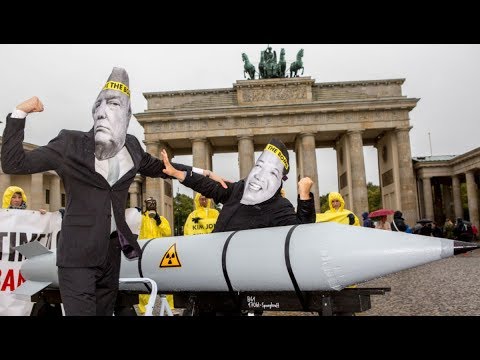 AARON MATÉ: It’s The Real News. I’m Aaron Maté. The Senate has held a hearing on a topic it hasn’t taken up in more than four decades, the President’s authority to launch nuclear war. Connecticut Democrat, Chris Murphy, said, “President Trump’s temperament is a cause for concern.”

CHRIS MURPHY: We are concerned that the President of the United States is so unstable, is so volatile, has a decision-making process that is so quixotic, that he might order a nuclear weapons strike that is wildly out of step with U.S. national security interests.

AARON MATÉ: Since taking office Trump has repeatedly stoked tensions with nuclear armed North Korea, threatening “fire and fury,” and most recently on Twitter calling Kim Jong-un “short and fat.” The senators floated the possibility of rewriting laws to constrain Trump, but a panel of experts told them any such effort could backfire. Instead, General Robert Kehler, former Commander of the U.S. Strategic Command, said, “The military would ignore any illegal order to launch a nuclear weapon.”

AARON MATÉ: Joining me now is William Hartung, Director of the Arms and Security Project at the Center for International Policy. Welcome, Bill Hartung. Let’s start with what we just heard from General Kehler. Do you find his answer there convincing, that the military would not obey an illegal order to launch a nuclear strike?

WILLIAM HARTUNG: Well, I would be concerned about the short amount of time they would have to decide whether it’s legal or illegal. Probably five to 15 minutes. If the President launches a first strike, is it because we’re about to be attacked? Is it because he just felt like it? That would be very hard to determine in that short amount of time. That’s why there’s bills, like the Markey-Lieu bill, which would at least for a first strike make the President consult Congress before putting millions of lives at risk.

Now there’s a new bill by Adam Smith, a ranking Democrat on House Armed Services, that would just blanket say, “United States will never use nuclear weapons first,” so there would never be a first strike. It would not be U.S. policy. At least with bills like those in place, there’d be some sort of a break on the President who now basically has sole authority. I don’t think Trump should have that, I don’t think any President should have that.

AARON MATÉ: What do you make of the fact that the Senate has held this hearing on nuclear authority for the first time since I believe 1976?

WILLIAM HARTUNG: Well, although Senator Corker wasn’t as strong as I would like in the hearings itself, his opinion is not that different from what we heard from Senator Murphy at the top of the show. He’s very concerned about this. I think Trump was sort of miffed that such a hearing is being carried out. Unfortunately, as you suggested, the witnesses were not very strong. They kind of lean towards keeping things the way they are. They said things like, “Well, North Korea’s watching. We don’t want them to think our resolve is flagging because we’re discussing this.”

Of course, if they knew we weren’t going to launch a first strike, things would be more stable. We’d be safer. They wouldn’t incorrectly or by accident launch a nuclear weapon because they thought we were about to attack them. This whole notion that the status quo is safer than the kind of changes that members of Congress and arms control peace groups are suggesting, the idea that the status quo is acceptable or somehow safer just doesn’t hold water.

AARON MATÉ: The argument that you’ll get back when people advocate a no-first-strike policy is that, “Well, that leaves us prone to being attacked first.”

WILLIAM HARTUNG: Well, the idea of deterrence, which is certainly not perfect, is that … Well, certainly in the case of North Korea, the United States has 4,000 nuclear warheads and if they saw a launch on the way, they would launch before the U.S. was hit. If you’re Kim Jong-un, as former Secretary of Defense William Perry has pointed out, he’s a dictator, but he’s not suicidal. Perry believes he would not launch a nuclear attack against the United States, unless he was under attack from the United States. When you’ve got this overwhelming edge that the United States has, far more than is needed even for deterrence, I think the prospects of North Korea striking first are close to zero.

AARON MATÉ: One of the issues that we don’t talk about very much when we speak about what’s driving U.S. nuclear policy, are the interests behind it. You take up this topic in a recent piece for The Nation and TomDispatch. Your advice, just as an overall guideline to understand the issue, is to follow the money. Can you explain?

WILLIAM HARTUNG: Yes. Well, ever since Eisenhower gave his military industrial complex speech, the nuclear lobby and their allies in the military and Congress have been pressing for more nuclear weapons than we need. Eisenhower tried to block an unnecessary nuclear bomber and under pressure he sort of gave it a reprieve. They campaigned on a missile gap, Kennedy did, even though there was no such gap and that was intelligence and military people pushing that idea to scare the American people into spending more on nuclear weapons than we need. Now we’ve got this $1.7 trillion nuclear modernization plan over the next three decades, which the Congressional Budget Office just cost it, so adjusting for inflation, $1.7 trillion.

That’s also not needed, but General Dynamics, which makes nuclear submarines, Lockheed Martin, which makes submarine launch ballistic missiles, Northrop Grumman, which is involved in building things like nuclear bombers, and many other companies press Congress. In fact, if you see a debate on things like, “Do we need a nuclear triad, air-based, ground-based and sea-based ways to launch nuclear weapons?” A lot of times the people who come to the defense of something like ballistic missiles have ballistic missile bases in their states, or a control system in their state. They’ve got pure pork barrel motives that they try to dress up as strategic motives. A lot of this excess nuclear arsenal comes from that power and profits of these companies more so than somebody sitting down and having a rational kind of discussion about what you need to defend the country.

AARON MATÉ: You mentioned that nuclear modernization program that began under President Obama. Let me ask you about one aspect of that. There was a recent study in the Bulletin of Atomic Scientists that said that, “Because of the upgrades to the arsenal, even though the number of warheads may have been reduced, the lethality of the existing warheads has increased by up to three times.” Are you aware of the study and can you comment on what it means?

WILLIAM HARTUNG: Yeah, I’ve heard reference to that and I’ve seen the discussions. There’s a couple things. There’s one new nuclear weapon under construction where they can dial the yield up and down. All of the weapons, of course, are much more powerful than, for example, the bombs that killed hundreds of thousands in Hiroshima and Nagasaki. The idea of more lethal bombs just means more civilian causalities in a nuclear attack, which would already be horrific even at current levels of destruction. The reason that we have now a nuclear weapons ban treaty at the U.N. is because people finally looked at the humanitarian consequences of nuclear war, which with relatively small numbers of weapons could end life as we know it on Earth.

Not just from the explosion, but from famine, from radiation, and so forth. Other than the countries that are the biggest nuclear powers who are holding back, the vast majority of countries in the world have finally said, “These things should be illegal just like biological or chemical weapons are illegal.” I think they’ve put the big nuclear powers kind of on the run, both morally and politically as a result of doing that, so that’s I think a great achievement for global civil society.

AARON MATÉ: Finally, Bill, in terms of who influences nuclear thinking in Washington, can you talk about the complex of think tanks funded by the nuclear industry, what they advocate for, and how influential they are?

WILLIAM HARTUNG: Sure. We don’t know the full story, because it’s hard to dig up these numbers, but certainly a place like the Center for Security Policy run by Frank Gaffney, who’s now a professional Islamophobe, but spent many years boosting Star Wars. He couldn’t have started his think tank without money from Boeing, and Lockheed, and other contractors. The Lexington Institute whose main spokesperson, Lauren Thompson, is all over the discussions in the news about these things.

They are funded by major contractors. Heritage Foundation, of course, which is probably the biggest megaphone for spending more on the military, got money for example from Lockheed Martin when they were boosting one of their fighter aircraft right around the time they put out a big push on that. A lot of people don’t realize that when they hear these experts, they’re basically on the payroll of the contractors. Rather than the head of Lockheed Martin coming out and saying, “Oh by the way, give us more money to make weapons,” they have these people in think tanks making these sort of seemingly rational agreements that really are driven by special interests.

AARON MATÉ: We’ll leave it there. William Hartung, director of the Arms and Security Project at the Center for International Policy. Thank you.