Supreme Courts Considers Limiting the Right of Unions to Organize

Mulhall v. Unite Here decision will have a profound effect on employer neutrality, a union's ability to reach employees, and whether a union will be recognized by the employer during labor negotiations.

Mulhall v. Unite Here decision will have a profound effect on employer neutrality, a union's ability to reach employees, and whether a union will be recognized by the employer during labor negotiations. 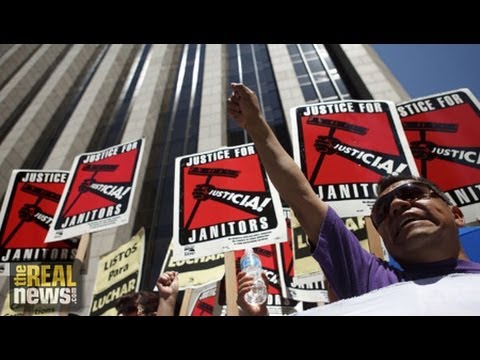 On November 13, the Supreme Court will rule on the Mulhall v. Unite Here Local 355 case. The decision will have a profound effect on employer neutrality, a union’s ability to reach employees, and whether a union will be recognized by the employer during labor negotiations.

Now joining us to unpack this case is Professor William Gould IV. He’s the Charles Beardsley Professor of Law emeritus at Stanford Law School, where he has been a professor since 1972. Professor Gould was chairman of the National Labor Relations Board from 1994 to 1998.

WILLIAM B. GOULD IV, PROF. OF LAW EMERITUS, STANFORD LAW SCHOOL: Good to be with you.

DESVARIEUX: So, Professor, without getting too much into the specifics of the case, let’s discuss what transpired between Martin Mulhall of Florida and the union Unite Here. So he essentially was a hospitality worker at Mardi Gras Gaming, which is the operator of a dog racing track and gambling casino. But he was opposed to unionization, so he sued the union. So, essentially, what’s the question before the Court?

GOULD: Well, the question before the court is whether the union, which had negotiated a so-called neutrality agreement with the employer to prohibit antiunion propaganda and to allow the union to be able to reach employees more effectively, whether that agreement violated the National Labor Relations Act’s amendments in 1947, which prohibit a union from seeking or obtaining from an employer a thing of value, whether that agreement is a thing of value.

The amendments to the Act were enacted so as to stop union bribery. Some unions were in the business of simply taking payoffs from employers directly rather than negotiating benefits for employees. That’s unlawful. And the attempt by Mr. Mulhall is to say that this neutrality agreement is the same kind of thing as a bribe to the union, which is unlawful.

DESVARIEUX: But, professor, what’s really at the heart of this case? What’s at stake here for unions?

GOULD: Well, the National Right to Work Foundation has in a variety of ways, through considerable litigation, attempted to cripple unions and really eliminate them as a force in American society, either for the purpose of engaging in collective bargaining, representing workers, or for their involvement in the political process. And they have pursued a very fervent, vigorous antiunion agenda for a number of years.

The National Right to Work Foundation, of course, the title mirrors right-to-work laws, which prohibit [incompr.] union security agreement. And it’s really a misnomer. They don’t pursue any right to work. What they do is they pursue policies which are aimed at undermining unions in the workforce in our society.

DESVARIEUX: Alright, Professor Gould. Thank you so much for joining us.

GOULD: Surely. Good to be with you.

A prolific scholar of labor and employment discrimination law and Charles A. Beardsley Professor of Law, Emeritus at Stanford Law School, William B. Gould IV has been an influential voice on worker-management relations for over forty years and served as Chairman of the National Labor Relations Board (1994-’98). Professor Gould has been a member of…