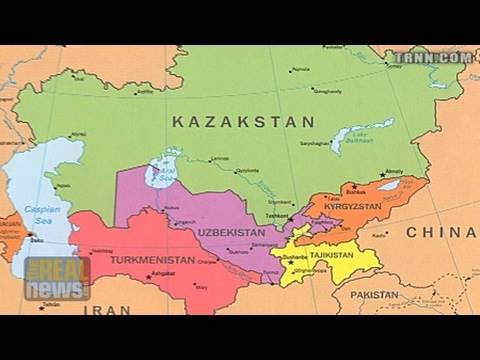 PAUL JAY, SENIOR EDITOR, TRNN: Welcome back to The Real News Network. I’m Paul Jay in Washington, and joining us again from Frankfurt, Germany, is F. William Engdahl. He’s the author of the book Full Spectrum Dominance: Totalitarian Democracy in the New World Order. Thanks for joining us, William.

JAY: So we’re talking about Kyrgyzstan. In 2009, President Bakijev started a bidding war between Russia and United States. He made a deal with the Russians, which everyone thought meant he was going to break the deal with the Americans, but he didn’t. He wound up earning money from both of them, and I guess angering both of them. And now he’s gone off to Kazakhstan. So what happens now? The Russians are clearly very close to the new government. The American policy of supporting and nurturing Bakiyev has kind of blown up in their face. Where does it leave US policy in the region?

ENGDAHL: Well, I think Washington right now is walking on eggshells in the region, especially if you combine it with the defeat that the Washington color revolution, the Orange Revolution, in Ukraine suffered two months ago, with the election of the Yanukovych government, which is not a Moscow client regime, but it certainly is a staunchly neutral, non-NATO oriented regime compared with its predecessor. So I think Moscow, the Medvedev-Putin team, have a very clear strategy, if you will, of a rollback of the NATO encirclement of the last 10 to 15 years that had so threatened Russia up till about 2007, 2008. I think in terms of Kyrgyzstan right now Washington is trying extremely concertedly to not lose its lily pad, if you will, in the Manas Air Base, not really primarily because of Afghanistan troop supply lines, but because it’s part of a larger agenda. Since the 1990s, the Pentagon is on record, on and off the record, as looking for any excuse, whether it’s the Taliban in Afghanistan, whether it’s an oil pipeline, energy security, and so forth, any excuse to have permanent US military presence in Central Asia. The reason for that, as I talk about in the Full Spectrum Dominance book, is literally to control the only landmass in the world, the only center of population, technology, raw materials that has the potential economically and politically to rival the power of the United States, and that is the Eurasian landmass which encompasses the countries of the Shanghai Cooperation Organisation—China, Russia, Kyrgyzstan, Uzbekistan, and Kazakhstan, and some of the other Central Asian countries. So at this point Washington wants to keep a permanent military presence in the country. They also, I would expect, are going to try to up the bidding war for some kind of renewed military presence in Uzbekistan. If they will succeed with that or not—the Russians managed to woo [Islam] Karimov back after the 2005-2006 period. But in any case, Washington’s strategic hand in the entire region is fundamentally weakened by the events in Kyrgyzstan over the last five to six days, regardless of what kind of agreement to keep the Manas base open or not. One Russian source that I spoke with, who has ties to the FSB, the intelligence services in Russia, believes that there may be a horse trade between Moscow and Washington. The Russian government made an official call on NATO about a month ago in a meeting of the NATO-plus-Russia steering committee in Brussels, and they requested that NATO make a concerted effort to shut down the poppy opium production in Afghanistan, which produces—. Since the US occupation, Afghanistan is the source for 93 percent of world heroin, according to UN statistics, and prior to that, prior to the US invasion, the Taliban had brought that down to almost zero. So you connect the dots. But repeatedly special envoy Richard Holbrooke for the Obama administration, the Pentagon, and others in Washington have said, we’re not going to tend to the business of opium eradication in Afghanistan; we’re going to fight the Taliban—which is really but a ruse, given the way that the opium warlords, the Karzai government, and his brother, and so forth are locked into the drug trade, and also—according to The New York Times and other sources, are also locked into the payola channels of the CIA.

JAY: But is what’s going on in Kyrgyzstan a reflection of something rather new and significant, which is that the US simply cannot follow a policy of full spectrum dominance anymore, because Kyrgyzstan has options that it may not have had 5, 10, 15 years ago? Kyrgyzstan can make deals with Russia. And they can make deals with China, which is the other big factor in this scenario. China does a lot of trade with Kyrgyzstan, they’re right on the border, and it wouldn’t take very much. And apparently there’s already talk under the Shanghai agreement of the possibility of Chinese troops even coming into Kyrgyzstan as peacekeepers. But the main point here is Kyrgyzstan’s got options they didn’t have before.

ENGDAHL: Well, number one, they have options they didn’t have before, because the Shanghai Cooperation Organisation that they’re a member of, founding member of, is a far stronger and more cohesive forum for dialog and economic agreements between those countries, Russia or China and so forth; and number two, the fundamental strategic weakness of Washington, especially after the 2007 financial tsunami—the weakness of Washington is perceived by the entire world. And also—this I know from direct discussions with leading Chinese strategists and academics in the past several years—the Chinese are aware that the agenda of Washington is full spectrum dominance, is total domination of land, sea, air, space, cyberspace, you name it, and that’s an agenda that the Chinese are none too happy about. So the efforts of the US in Afghanistan are a direct threat militarily, potentially, to China. The efforts of the US to keep its base in Kyrgyzstan is a direct threat, especially because they had planned with the Basiyev government to have a terrorist—"antiterrorist", quote-unquote, training center in Kyrgyzstan. And the Chinese are sitting right across the border with the volatile unrest in Xinjiang province, with the Muslim minorities of China in that province. So they’re extremely nervous about the idea that there might be some shenanigans by Washington to infiltrate the Chinese border and create trouble there. So it’s really a different deck of cards, it’s a different chessboard, whatever you want to call it.

JAY: I think that’s the point is that it’s a different chessboard and whether this Obama administration or some other administration, whether their thinking’s actually going to catch up with the fact that this is a different world now. The control of Eurasia that Brzezinski talked about that was so necessary to prevent global anarchy in all of this, that simply doesn’t seem to be possible for them anymore. But whether they recognize that before they go bankrupt, I suppose, is the question.

ENGDAHL: Well, I think the problem is Washington is on automatic pilot. All the key policymakers, whether in the Pentagon, whether in the think tanks, whether in the national security apparatus or the State Department, really are products of the immediate post-Cold War early ’90s era, where they cut their teeth, people like Holbrooke and so forth. And the magician of the Dayton Accords—which he was not by any means, by the way—Holbrooke has been an utter failure in terms of his diplomacy with the Karzai government in Afghanistan, as well as with the Pakistani government, and the US is losing more ground than it is gaining, even in military basing capabilities. So I think it’s far from a position of strength that Washington is facing the events in Kyrgyzstan right now.

JAY: There are voices in Washington, for example people like Larry Wilkerson, who used to be Colin Powell’s chief of staff, and it represents a certain section of the professional policymakers here, that it’s simply time to give up on the global dominance strategy. But this does not seem to be much on the agenda for this demonstration.

ENGDAHL: Well, as I say, I think it’s on automatic pilot. They don’t have a plan B. Everything that the Pentagon has done strategically since the collapse of the Berlin Wall in November 1989 has been about creating total military control over every square inch of this planet, and that’s an insane agenda if you have any sense of proportion. And of course other nations are not going to be too thrilled with that prospect. So the first sign of weakness—and Iraq was that first sign of weakness, really, the Afghanistan, if you will, of the United States before Afghanistan became the Afghanistan of the United States, referring to the Russian experience in the ’70s and the ’80s there. But at this point the greatest, awesome military might on the planet is really the Goliath that’s being called down by the little Davids all over the place. And that’s—this form of asymmetrical combat is something—as was the case in Vietnam during the ’60s and ’70s, the Pentagon war machine is simply not capable of taking that. People are fighting for their own land, they’re fighting for own economic future, their own security, and that’s a very, very potent motivation. The US has no such motivation, except to dominate, and that’s—power corrupts, as Lord Acton said quite some time ago, and absolute power corrupts absolutely. And I think we have an absolutely corrupt power structure that’s calling the shots still in Washington.

JAY: Thanks for joining us, William.

JAY: And thank you for joining us on The Real News Network. And don’t forget the Donate button. Or, if you’re in the United States, you can text us the word "news", to 89544, and you’ll send us $5.