1 out 4 Portuguese Seniors At Risk of Falling Into Poverty, Ruling Party Gets Slammed in Elections

Crisis in the Eurozone 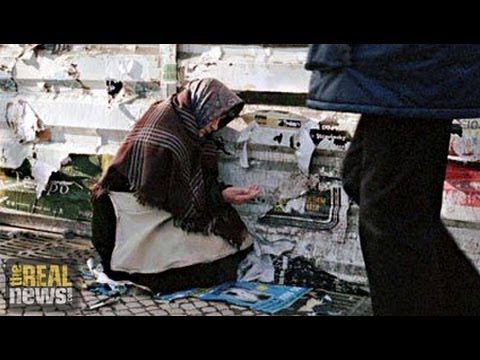 On Sunday, the center-right Social Democratic Party reported its worst local election defeat in more than two decades. Though turnout was low, Portuguese voters have been angry over the increase in austerity measures and tax hike.

Now joining us to discuss the latest in postelection coverage is Walter De Broeck. He’s a freelance journalist based in Portugal, working since 2009 for several print and online media.

Thanks for joining us, Walter.

DESVARIEUX: So, Walter, let’s first discuss the results. How big of a defeat was it for the Social Democratic Party? And were there any surprises in this election?

DE BROECK: Yeah, it has been a very big defeat, because the Social Democratic Party is a party that is deeply rooted at the local level. So losing a majority of cities, even smaller ones, it’s–has hit them very hard. At the same time, the opposition party has not won that much, okay? We cannot talk about an overwhelming victory for the Socialist Party.

So you see at the same time two interesting phenomena. One of them you already mentioned, that is, the very low voter turnout. I think that it’s about only 52 percent of people who went voting [incompr.] extremely low. It’s historically low. And at the same time, you see in some cities that independent candidates without the support of any big party have managed to win a city. So you see at the same time people turning away from big parties and losing their interest in politics, you can say, and that those two are effects of austerity, clearly.

DESVARIEUX: Let’s talk about some more effects of austerity and the effect that it’s really having on everyday people, especially the elderly. We’re seeing the purchasing power of retired people, it’s fallen by 20 percent since 2010, and other social consequences of the policy. Can you elaborate on some of those consequences?

DE BROECK: Of course. Actually, what is austerity, in fact? That is, since 2011 there has been a series of measures, starting with three rises in value-added taxes to a level of 23 percent. There has been wage cuts. There has been cuts in subsidies for jobless, for families. But, as you say, one of the most affected groups has been the retired people, with–one of the last measures that now is going to start on October 1 is that there has been a 10 percent cut in pensions of civil servant workers, even people who earn about–not more than EUR 600 per month.

So, as I said, these accumulated measures of austerity have caused a drop in purchase power. And as we’ve seen [incompr.] that not only, yeah, let’s say, the share of people of these group, elderly, retired people that are in–they’re, let’s say, nearing poverty, has seen an increase to almost a quarter of all of retired people. So you can see that today 25 percent of the 2 million elderly and retired people in Portugal are at poverty risk. And that’s quite a lot.

DESVARIEUX: Absolutely. So basically one out of four elderly people is at risk of being in poverty.

Let’s talk a little bit more about austerity and the bailout, a potential second bailout for Portugal. What are you hearing there on the ground about a second bailout?

DE BROECK: There has been some talking about a second bailout even during the campaign for the elections. Now, government has used it as a kind of, let’s say, a fear factor or some kind of a way to make people to care that if there would be a second bailout, austerity would continue, and that they have to, say, behave well. But at the same time, we see that government bonds for ten year, for example, are trading still about 7 percent. And that is the critical limit, considered critical for country to finance itself on the bond market. So you see that at this moment Portugal is not considered to be able to join again the normal financing system by June 2014 as it was planned in the first bailout. So what most people say here, I think, is that there is going to be a second, so-called second bailout, and that would mean a new package of financial aid. And that would imply, again, new austerity measures.

So you can ask here who’s benefiting from this situation. You know, one can look at it as kind of an emergency [incompr.] on most people, ’cause there has been–the measures that have been taken over the last two years have huge impact. Not only there is the situation of elderly. There has been mass unemployment. They are still [incompr.] 17 percent. There has been mass emigration at the same time, so this unemployment is even bigger, if you want, because about 250,000 people, mostly young skilled people, have left the country over the last two years. These are, let’s say, consequences, social consequences that are very, very huge. And then when, let’s say, you combine them with the actual perspective of a new bailout, you see that that austerity is here on a kind of a deadlock. There’s no–the politics–policies have failed, but they will continue them. There is–so the big question is: how long can a country, any country, take this?

DESVARIEUX: Yes. And it seems that there seems to be a growing rift from what people are experiencing on a day-to-day basis and what decisions the politicians are making there in their places of power.

Well, Walter, we’ll certainly continue to follow this story. Thank you so much for joining us.

Wouter De Broeck is a Belgian freelance journalist working since 2009 for several print and online media in Belgium from the city of Oporto in Portugal. He has a master degree in German, Dutch and Portugese literature and he works currently on some fiction. But mostly he reports on economic and financial issues. His main…