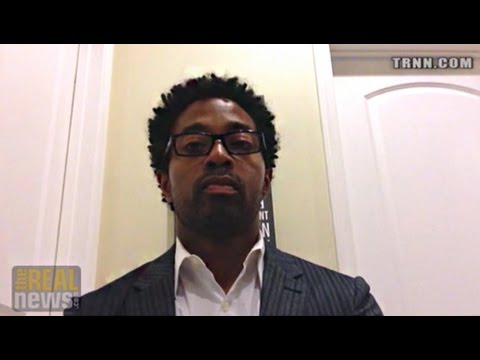 JAISAL NOOR, PRODUCER, TRNN: This is Jaisal Noor. I’m back in Baltimore after traveling to Ferguson last week to cover the one-year anniversary of the killing of Michael Brown by Officer Darren Wilson. Hundreds of demonstrators marked the occasion with several days of protests, demanding justice for Brown and change.

While in Ferguson we explored what this change looks like one year after that fateful event that sparked weeks of unrest and spurred a national debate over the issue of police brutality and policing in minority neighborhoods. Well, one of the changes that has transpired over the past year is the election of two additional black city council members in the majority black city of Ferguson. We’re now joined by one of those city council members, Wesley Bell. Mr. Bell represents Ferguson’s 3rd Ward. He’s also an attorney, a professor, and a municipal court judge in Velda City, which is also in St. Louis County along with Ferguson.

Thanks so much for taking the time to talk to us, Mr. Bell.

NOOR: What do you see as the changes that have taken place in Ferguson over the past year?

BELL: I think there’s been a lot of positive change, and not just the visible or surface changes with respect to the council becoming diverse as well as many of our city leaders. And again, I do want to stress that the goal is not diversity for the sake of diversity. You don’t want to, you still want to bring in quality people who can do the job and serve our citizens.

NOOR: And so talk about what some of this positive change looks like, and what it means for the people, the residents of Ferguson.

BELL: Well, if you look at our courts, we have one of the best judges in the state now heading our courts in Judge Donald McCullin. And even the Department of Justice has noted the changes that we’ve made in our court. The goal is that everyone is treated fairly and equally regardless of their economic situation or what have you. And that’s what you’re seeing now in our courts. Also one good thing, another thing that was probably my biggest issue, was community policing. We have started that process, we started the implementation of that model. We’ve hired an expert to help us, to help facilitate a model that is specific for Ferguson. So I think those are a couple things that you can see as well.

Now, in addition to that, the courts, that’s a quick fix. That’s something that we can change quickly, particularly with the right judge and how we’ve repealed some of our fines, like the failure to appear fines which contributed to the excessive fines that were in the city. So many of those have been repealed. But also the community policing, which fully will take nine months to a year to fully implement, but we’ve started that process. And I think the weekend was an indicator of that.

NOOR: And so on that issue of the courts and of ticketing and of police, as we all know, the Department of Justice released a scathing 87-page report. When we were in Ferguson last year many residents spoke of feeling that they were unfairly treated in the courts and by police. Eric Holder said it’s time for Ferguson’s leaders to take immediate wholesale and structural corrective action. That was back in March before you were elected into office.

CNN Money did an investigation earlier this month and they found that while the number of tickets and arrests had decreased, they’re increasing again. And they declined sharply in March when the Department of Justice report was released, but they have nearly tripled since then, from 189 in March to 538 in June. What’s your response to that?

BELL: Right. What I noticed in March, and that was during–I guess earlier, or several months ago, obviously before I was here. Before I was on council, I should say. Is that there was a drastic cut, a reduction in the number of tickets and arrests and things of that nature. And I think that had a lot to do with what was going on at the time. And I think many in law enforcement were taking a less proactive role. And probably, and I think the increase is still a decrease from last year, but I think now that we’re starting to implement more community policing you’re going to see an increase from March. But still it’s going to be a lot lower than from last year, if that makes sense.

So I think part of it is the normal balancing out of now that we’re starting to get back to what we call our new normal, we’re going to see an increase from earlier in the year, but it’ll still be decreased because the emphasis will not be on revenue, particularly with respect to tickets. So I would say let’s look at the numbers fairly, and I think that you’re going to see and you have seen an improvement in the way that our community is policed and the job that our men and women of law enforcement are doing.

NOOR: What does community policing mean to you? Because this issue of community policing has been, it’s been a discussion that’s happening all over the country. And here at the Real News in Baltimore we’ve held town hall discussions on that issue. And you know, some people point to different models happening around the country. Everyone agrees that every community needs its own model, but there’s models that exist in places like Toronto, where it’s a civilian review board, or even a governing board, that not only gets to review policies but also gets to decide policies, they get to hire and fire police chiefs. Is that something that the city of Ferguson is looking at?

BELL: Well, that’s not community policing per se. Yeah, the term does get thrown around. But as you know, I’m a professor of criminal justice so, you know, it has a specific meaning. Now, there’s a lot of different ways that that’s going to fit an individual community. So what fits for Baltimore or Toronto will not necessarily fit for Ferguson. But at its heart it’s about information going two ways initially. Or to start the, I guess to start the educational component, if you will.

Traditionally police departments, if there’s a problem they implement policy. Community policing suggests that the information goes two ways and that the public has input, as well. Now, that can manifest in a lot of different ways. For example, community partnerships, neighborhood associations, watch, block units and things of that nature. But in South Central LA after the riots, that also, part of what worked for their particular community was in addition to the things I mentioned police officers even coaching little league basketball and football, because that’s a way of building those relationships early with our young people.

So it can, it can look different ways. But at the heart of it it’s about information going two ways. It’s about creating more community partnerships. It’s about the police department being a part of the community as opposed to being distant from the community. But just like we’ve done, we’ve hired an expert to find that, to help customize a model for Ferguson.

NOOR: And so you’re a professor of criminal justice. A lot of people that we talked to, and as Eric Holder acknowledged in his comments about Ferguson, the rifts you have in communities like Ferguson, they go back decades if not even centuries between African-American communities and law enforcement. I know community policing is one part of it, but what else can be done to restore that trust with law enforcement? You have things like the war on drugs, you have mass incarceration. These forces that you can’t change on a local level, obviously, but they’re things that have to be acknowledged and dealt with as well.

BELL: Well, first we have to actually identify the problem and actually own the problem to have a real discussion on it. So I don’t think it’s fair to say communities like Ferguson, because this is something that permeates throughout our country, throughout our society. So these kind of issues, these pre-dated Ferguson. Issues with law enforcement, these are issues that we were–I just saw the NWA movie. Those go back to when I was a teenager. You go back and you watch, you watch other shows from the ’70s and different commentators from the ’70s. These issues were there. So you can go back through the beginning of, you can go back through the history of our country, and we’ve seen these same issues.

NOOR: And on the issue of revenue, which you touched upon, you mentioned–some of the information that came out in the wake of the killing of Michael Brown and the protests last year is that the second-highest source of revenue for Ferguson projected would have been tickets and fines. What other sources of revenue are being explored to make up for those, I think it’s something like $3 million for the 2015 budget would have been tickets and fines.

BELL: Well, that’s not completely accurate. When you budget you tend to over–you tend to over-budget even though you’re not sure that that’s what it’s going to come out to be, because you’re trying to predict. And no one can predict exactly how much fines are going to come from a certain place. But you do have to budget.

So the $3 million, I don’t think anyone, and I’ve talked to our finance director, they were never expecting to get that much in revenue. Just like with what was approved in the budget, we have no idea if that’s going to be the number. The point is that revenue is not going to drive our courts. And our judge, that’s the way he’s approaching it, that’s the way the council is approaching it. Our courts are to hear these cases and treat everyone fairly. Now, if the city has to tighten–if we have to tighten our belt a little bit, so be it. But there’s, but Ferguson has the revenue coming in through businesses, property values and property taxes, and things of that nature, so we’ll be okay. We may have to tighten our belt but we should be okay.

But I’ll say this, and let me clear, in no uncertain terms, that if a city can’t keep the lights on with without taxing its citizens, then you need to do something else. Ferguson, fortunately, isn’t in that situation.

NOOR: All right. Well, Wesley Bell, thanks so much for joining us.

BELL: Thank you for having me.