Sen. Elizabeth Warren, who vows to tax the rich to pay for social programs, says New Hampshire isn't 'do or die' for her campaign.

Sen. Elizabeth Warren, who vows to tax the rich to pay for social programs, says New Hampshire isn't 'do or die' for her campaign. 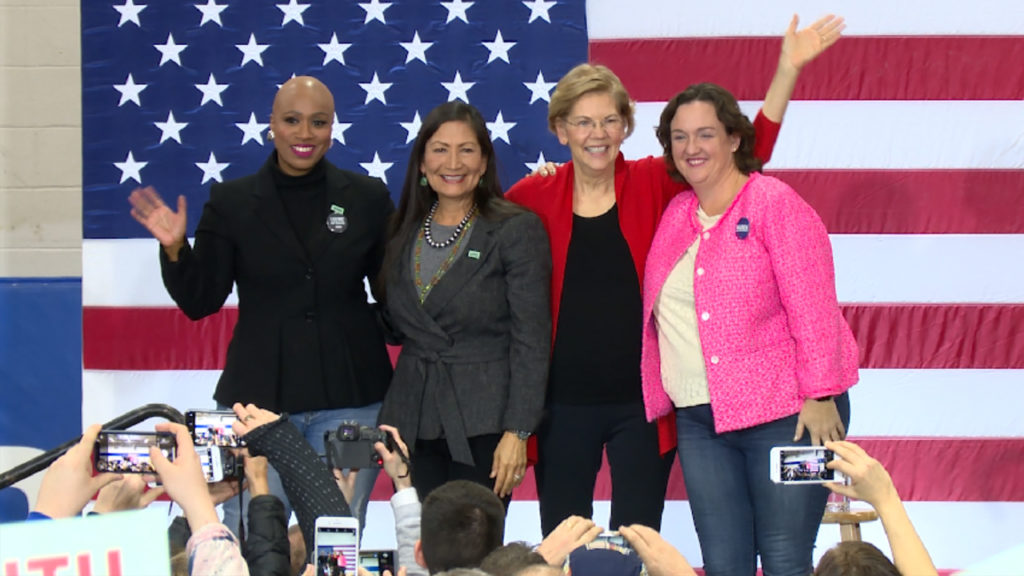 Speaker 1: Is New Hampshire Elizabeth Warren’s last standard to use another cliche as a do or die?

Elizabeth Warre…: There are 55 more States and territories after this. It looks like it is going to be a long battle to the nomination. We have already built out offices and have on the ground troops in 30 states. One of the advantages to deciding at the very beginning that I was not going to spend 70% of my time sucking up to billionaires and corporate executives and lobbyists means that I’ve had more time to go around and do town halls all around this nation.

Deb Haaland: For those of you who are yet undecided, I want you to know that Elizabeth can win. She can beat Donald Trump, she can make sure that we restore compassion and love and accountability to the presidency and to this government.

Katie Porter: I want to say just a word about this message and why it is the message that will help us beat Donald Trump. I stand before you today, the first Democrat since the 1930s to represent my part of Orange County, California as a deficit of trust and faith in government. And the fact that Elizabeth keeps her promises when you know that there are so many people living with broken hearts because of broken promises because of broken systems. And that is why big structural change can’t wait.

Jaisal Noor: In her remarks, Senator Warren recounted her personal journey and then took questions from the audience.

Elizabeth Warre…: My work was always about one central question and that is what’s happening to working families in America. Why is America’s middle class being hollowed out? Why is it that people who work every bit as hard as my parents worked two generations ago today find the path so much rockier and so much steeper, and for people of color, even rockier and even steeper?

Jaisal Noor: She addressed her plans for public schools.

Elizabeth Warre…: … with just two cents. And here’s the answer, for two cents on the top, one-tenth of 1%, and just so everybody knows last year the 99% paid 7.2% of your total wealth and taxes. Okay. That top one-tenth of 1% paid 3.2% okay? Yeah, so they pitch in just two cents here’s what we can do. Universal childcare and early education for every child in this country. [crosstalk 00:03:37] Universal pre-K for every three year old and four year old in America.

Stop exploiting the people who do this work, largely black and brown women, raise the wages of every childcare worker and preschool teacher in America. Two cents.

Elizabeth Warre…: The problem is a lot bigger. We now have an America that works great for those at the top, including corporations. We need to stop and acknowledge in America, trickle down economics has been a monumental failure and has undercut working people throughout this country. I am making a real commitment, a trillion-dollar commitment to environmental justice to cleaning up the mess that we have collectively made for decades now. Another part, I’m strong on the green new deal, but it’s not enough. I’ve also got a blue new deal. We got to take care of our oceans.

Jaisal Noor: We caught up with Nelini Stamp from the Working Families Party which has endorsed Elizabeth Warren.

Nelini Stamp: For the last decade, and even plus Senator Warren has been working with communities when she fought to pass the CFPB, the Consumer Financial Protection Bureau. She did that with outside and not being in the halls of Washington and did that with grassroots organizations, institutions, movements to take on the Republicans, to take on the democratic establishment and the banks and win. And so I think she has a vision that our members and our organization really believe in.

Jaisal Noor: With Cameron Granadino, this is Jaisal Noor in Concord, New Hampshire.